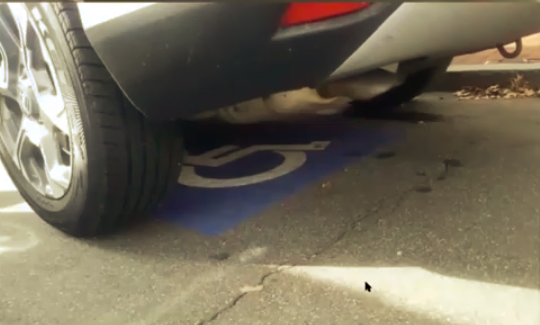 Parking Bureau photo of the motor vehicle ticketed in September 2021 for parking in a disabled space. The Parking Commission voided the ticket. Photo courtesy of the New Canaan Parking Bureau

Town officials last week voided a $150 ticket that had been issued to a New Canaan woman who parked in a disabled space on Elm Street. 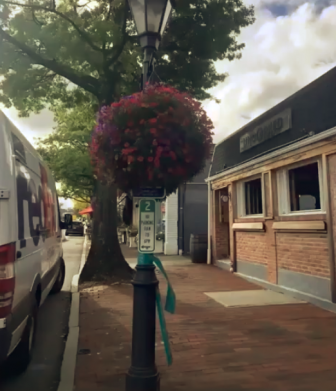 Appelant’s photo of the motor vehicle ticketed in September 2021 for parking in a disabled space. The Parking Commission voided the ticket.

Shohah Drakos told members of the Parking Commission during her Nov. 4 appeal hearing that the sign indicating a “handicapped” space on Elm just above the intersection with Main Street was obscured by a hanging basket, and that she didn’t see the blue-painted symbol in the road because she backed into the space while parallel parking.

In addition, a blue line painted in the street marking out the spot did not “look like an official” line, Drakos said during the hearing, held via videoconference.

“I parallel-parked into the space and saw that I had a two-hour parking OK, what I assumed was OK, and went on way and did a few errands and came back to find that I inadvertently had a ticket because I’d parked in a handicapped parking space which I would generally obviously never do,” she said. “I work with the elderly and I know what it’s like when you are counting on having a handicapped space that’s available and it’s not and it’s being taken up by somebody else. So I was horrified, A. That I had done that and B. That the sign was completely obscured by the plant, as you can see.” 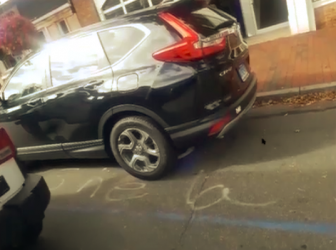 Parking Bureau photo of the motor vehicle ticketed in September 2021 for parking in a disabled space. The Parking Commission voided the ticket. Photo courtesy of the New Canaan Parking Bureau

Budd noted that the Commission this past summer upheld a ticket that had been issued in similar circumstances, where one of of the three indicators that the town has for disabled spaces—a posted sign, painted blue symbol in the street and blue line marking out the space—had been obscured. (That woman lived in Norwalk.)

Yet Magratten said the town should work toward ensuring that disabled space markings are all clear.

“I feel like this is a classic case of somebody is trying to park—‘shoulda, woulda, coulda’—the blue line looks like it’s spray-painted it’s not like an official line,” Magratten said. “If I’m sitting low in a car, looking up, I mean yes, she probably should have seen it but we are doing everything we can to almost make sure she can’t. As you mentioned, the hanging pots that are obscuring the sign, that’s on us and memorizing where spots are—it shouldn’t matter. It should be obvious and it’s not obvious from her vantage point.”

He referred to a point that had been raised regarding the space itself, located near the alley by SE Uncorked, which has been set aside for disabled motorists for decades (the appellant has lived in New Canaan for about 25 years, she said).

“I just I don’t memorize where the handicapped parking spaces are, I probably was in a hurry and I didn’t know it was handicapped, that’s the bottom line,” Drakos said during the hearing. “I was not trying to get away with anything. Like I say, I generally have an elderly person in my car with me, bringing them somewhere and I would never get close to trying—it was an oversight, my appeal is basically that it was an oversight and it was a mistake. And from my vantage point, in the driver’s seat, was that I looked up and all I saw was the green section that said ‘Two-hour parking.’ So my instinct was that I had a parking space.”

A photo of Drakos’s ticket car showed that a FedEx truck was parked alongside the disabled space. Drakos said she drove past that truck and then noticed the open spot tucked in alongside it, and that she backed into the space.

Magratten said, “I can imagine if parallel parking with tall vehicle next to you and trying to get your rear in there, again, if it’s just one square. I think the bottom line is we should get our act together and paint the whole space blue.”

For years, the Parking Commission as a standard practice of never voiding tickets issued to those who park illegally in disabled spaces. That changed in May 2019, when the Commission voided a ticket that had been issued to a man whose father suffered a stroke and who applied for a permit and placard indicating he was disabled but hadn’t yet received them. Then last year, members of the Commission voiced concerns after Richey said a violation for parking in a disabled space had been waived without the group’s input. That ticket was voided following a discussion with First Selectman Kevin Moynihan and the head of the Parking Bureau, Richey said.