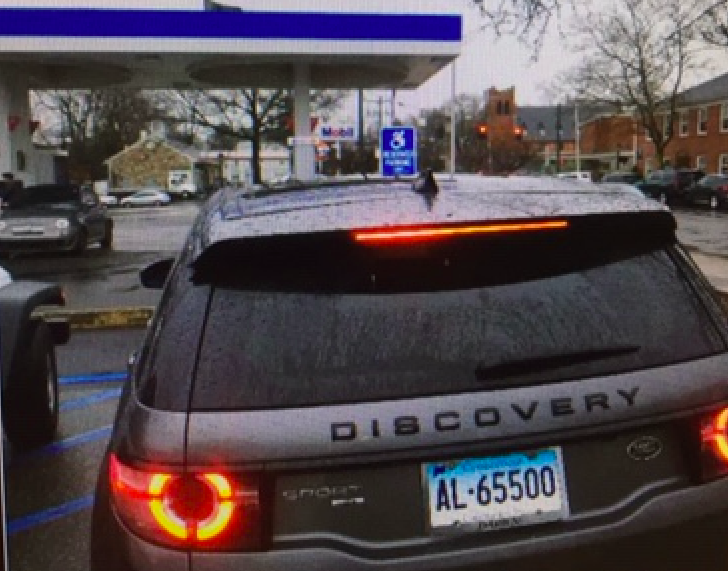 A New Canaan woman was issued a $150 ticket for parking in a disabled space on Feb. 10. New Canaan Parking Bureau photo

Members of the town body that hears parking ticket appeals last week voiced concerns after its chair said a violation for parking in a disabled space had been waived without the group’s input.

Parking Commission Chair Keith Richey said four appeals had come in recently from ticketed motorists and that he’d discussed them with the first selectman and head of the Parking Bureau “and the conclusion was we had to waive these because this meeting wouldn’t qualify as necessary due process” for an appeal.

“Maybe we will come to a different conclusion going forward, but I don’t feel too bad about having to waive four tickets,” Richey said during the Commission’s special meeting, held May 7 via videoconference. “And I’ll bet even the one with the parking in the handicapped spot, there was probably the whole street was empty so there was plenty of places for handicapped to park. That’s my guess.”

Yet under the Town Charter, the Commission is the municipal body that fields parking ticket appeals, Secretary Pam Crum said, and under an Executive Order from the governor during this public health emergency, the group can meet remotely and postpone those appeals.

“If there are no other people parking on the street, and a non-handicapped person parks in a handicapped spot, why should we waive the ticket?” Commissioner Peter Ogilvie said.

Richey replied, “I don’t think you understand,” and this exchange followed:

Ogilvie: “No, I don’t understand.”

Richey: “Well let me explain it. There is a thing in the [U.S.] Constitution about ‘due process.’ Which every person has a right to appeal a ticket, a conviction, anything. But this Zoom forum does not give us enough standing to provide an appeal. This is a decision by the first selectman.”

First Selectman Kevin Moynihan, a guest at the meeting, said that the Commission adjudicates tickets that come before the body, but that it doesn’t manage the Parking Bureau itself. If the town decides to waive all parking violations during a public health emergency, it can do that, Moynihan said.

“So I don’t know what we are talking about here,” he said, adding that there’s no ticket in this case for the Commission to adjudicate.

According to a copy of the ticket, obtained by NewCanaanite.com through a public records request, the $150 ticket had been issued at 12:47 p.m. on Feb. 11 for parking in a disabled space in Morse Court (about one month prior to COVID-19 virus-related restrictions taking effect in New Canaan).

The appeal of the ticket, dated Feb. 16 and signed by town resident Martha Weatherford, said: “After not being able to find a space to park my car for several minutes, in order to run into Press Burger for an order already called in and waiting (I circled the block first), I made a very poor decision to very temporarily put it in a handicapped spot across the street with the flashers on and my 16 yr. old son to watch over while I ran in. And it did not help that it was pouring rain. The officer asked my son to move the car and he explained he only had a Learners Permit, so technically could not move it without my being present. This was a detail I had obviously not thought through in my hasty decision. I am very proud of his response and actions though. Since he could not move the car the officer issued a $150 ticket. I was told I just missed her. It was only a matter of minutes that I was gone. I hoe you can Kindly reconsider the situation and either reduce to a warning or significantly reduce the fine charge. This is a lot of money for us. I promise you a lesson has been learned and this will never happen again, anywhere. If you can schedule a hearing, I would appreciate the opportunity to appeal in person.”

Richey said during the meeting that it wasn’t clear whether the violation occurred after the onset of the COVID-19 public health emergency, because a copy of the ticket was immediately available.

“My supposition would be the street was probably empty and someone just parked in a hurry and there was plenty of parking for handicapped to park—and they shouldn’t have been in handicapped, I’m not forgiving them—but I don’t feel that bad about having waived the ticket,” he said. “And I still feel that—I don’t know, I guess you could invite an appellant via a Zoom meeting—but we just didn’t invite them and they didn’t come to the meeting. So they can’t get due process because they weren’t invited.”

Ogilvie said, “But that’s our fault.”

“It seems to me we have screwed up on this meeting in multiple ways,” he said. “The first way was waiving the handicapped parking ticket. The second way we screwed up was not inviting the public.”

After Crum reviewed the local and state legislation around how parking ticket appeals are to be heard, Richey said, “All this just because you so badly was to enforce tickets for parking in a handicapped spot when the whole street was empty? You are unbelievable.”

He added, “This was decided by the chief executive of the town of New Canaan.”

Crum responded, “But that’s not what is in the Charter. I know these are unusual times and it doesn’t mean that there is not a valid way for the Commission to uphold the laws. And people are abusing those laws around town now. They are parking in crosswalks. They are parking in front of hydrants. They are parking in handicapped zones. In no parking zones. And we have got to find a way to continue having normalcy somehow and adjudicating, so that when things get back to normal there will be a sense of normalcy in our town.”

Asked whether notices already had gone out to the four ticketed motorists the their violations had been waived, Parking Manager Stacy Miltenberg said yes.

The Commission for years had made it a standing policy to uphold tickets issued to those who park in spaces reserved for the disabled. Last May, the Commission voided a ticket that had been issued to a man whose father suffered a stroke and who applied for a permit and placard indicating he was disabled but hadn’t yet received them.

8 thoughts on “‘We Have Screwed Up’: Town Waives Feb. 10 Ticket for Parking in Disabled Space”