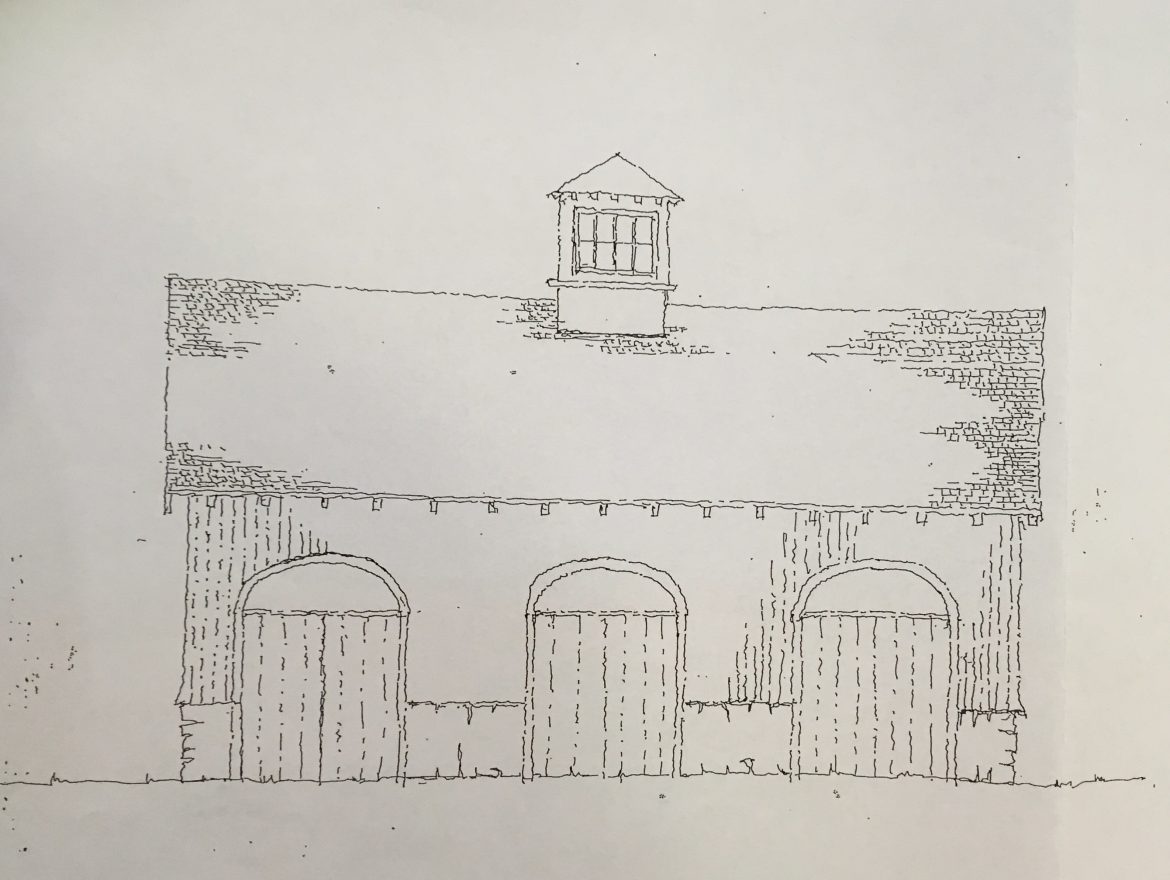 Rendering of the proposed barn.

After hearing from an Oenoke Ridge Road man that a neighbor’s plan to install a barn and pens for rescued pigs, goats and sheep was insufficient and potentially a health hazard, town officials on Tuesday night called for more time and an expert’s perspective on the proposal.

A Wilton native who met her husband at a wildlife sanctuary in Africa and has volunteered at the Animal Care Centers of New York City and Woodstock Farm Sanctuary in High Falls, N.Y., Boswerger purchased her four-acre property in northern New Canaan in October after researching its ordinances on keeping farm animals, she told the Commission during its regular meeting.

After consulting with an expert from the Woodstock sanctuary, Boswerger put together a plan to rescue four slaughterhouse-bound pigs, goats and sheep and to build an approximately 2,000-square-foot barn where the 12 animals could live, creating separate paddocks that would run out of the structure. Under New Canaan’s Zoning Regulations, such an accessory structure larger than 1,000 square feet requires a Special Permit from P&Z, and Boswerger applied for that permit through her attorney—David Rucci of New Canaan’s Lampert, Toohey & Rucci LLC.

One neighbor lodged objections to the plan with the Commission that Boswerger addressed during the hearing (more on that below), and another resident of the area—Joseph Gerardi of 1745 Oenoke Ridge Road, which is across the street and one property over—told P&Z that what’s proposed would not be “safe, sanitary, aesthetic and comfortable” for the animals.

“These animals, they need pasture areas that rotate because of parasites—animals get sick and if you don’t rotate the let-out areas, it is not healthy for them,” Gerardi told P&Z during the public hearing, held in the Town Meeting Room at Town Hall.

Gerardi said he’d researched how much land the animals in question need and that, according to his own calculations, “The property doesn’t support the number of animals they propose and it probably doesn’t even support the number of animals that could possibly live in a 1,000-square-foot barn rather than a 2,000-square-foot barn.”

He also said that he was concerned about “diseases that can be transmitted to humans” through mosquitoes and that “with the number of animals, we have to consider aesthetics.”

“I believe that too many animals in a small area is going result in a muddy stinky mess that is going to depreciate the value of properties and it’s not consistent with what is in this neighborhood.”

Boswerger responded that in plotting out the site, she and her husband not only took into consideration “rotating” the paddocked let-out areas for the animals, but also consulted with an expert at the Woodstock sanctuary and asked what would be the appropriate number of animals to house in a 2,000-square-foot barn with proposed paddocks. The answer was four pigs, six goats and eight sheep, she said—half again as many farm animals as she planned.

Commissioner Dan Radman asked why, if she planned to use just two-thirds the number of animals appropriate for a 2,000-square-foot barn, she wouldn’t reduce the size of the barn accordingly.

“Because these are the minimum requirements that our expert is saying—we don’t want to just give them the minimum,” Boswerger said.

“The whole reason why we are doing this is to help these animals and make sure that they have a good nice life. I don’t want give them just the absolute minimum that our expert is saying. Yes, of course, breeding operations and other types of operations would fit 100 animals in this size barn. But that’s ultimately that is not our goal, we want a little extra room and our property supports it. We are 300 feet from all the dwellings and so that is how we calculated what we wanted to do, to maximize it so we could maximize our impact.”

Boswerger referred to a requirement under health regulations that the area where they’re kept and maintained—the barn—be located at least 300 feet from all dwellings other than her own. (Gerardi told P&Z that the paddocked areas should qualify for the same 300-foot buffer—a matter that would be addressed by the health director, not the Commission.)

Commissioners asked whether Boswerger would agree to capping the number of animals at 12 as a possible condition of approval (yes), whether she would also consider moving a planned six-by-six-by-six-foot manure dumpster deeper into her property and away from the road (yes, so long as it’s allowable under Inlands Wetlands Regulations), how often that dumpster would be emptied (at least once per week and as needed), whether the animals would be neutered and spayed (yes), whether the animals in their paddocks would be visible from the road (not really because the property slopes up from the road), how the pigs would be cooled down (there’s shade from trees as well as the barn and sanctuaries use kiddie pools), whether tracking devices could be affixed to the animals to locate them in case they do get out (there’s microchipping, that can be looked into).

Commissioner Jack Flinn asked whether the planned four-foot-high fence is sufficient to prevent the animals from getting out, and whether provisions also would be made so they couldn’t dig under the fence. Boswerger said yes and agreed that an animal getting out would be her own “worst-case scenario, too” and that’s why both pasture and deer fencing is part of the plan.

“These are our pets,” she said.

Flinn said he spent summers growing up on a farm and that caring for such animals is time consuming and requires expertise. Boswerger said she plans to hire someone a full-time to handle such day-to-day tasks.

Kevin McQuilkin of 757 Oenoke Ridge Road—home of the “Abby Normal Farm” alpacas and subject of a land use complaint brought by a neighbor that ultimately was dismissed—said he was impressed by the Boswergers careful planning.

“We have got a great Health Department in this town who is extremely diligent and focused on the issues and are OK with it,” McQuilkin said, referring to Boswergers’ plans. “This couple has done a lot of work, a lot of research—very diligent, very thoughtful not just about the property but about caring for the animals.”

Members of P&Z said they wanted to hear from the town’s Health Department and to get more information regarding the appropriate space needed for the animals that Boswerger is planning to rescue.

Radman said his “biggest concern is the size of what is being requested.”

“The point that a 1,000-square-foot accessory structure is permissible—they are looking for 2,000 square feet,” he said. “The footprint of this proposed barn is 45 feet by 45 feet. Just so it gives you a sense of scale, that is bigger than this entire room for 12 small animals—pigmy pigs, pigmy goats and some sheep. In my opinion that’s a lot of space. I was born on a farm but I did not grow up on a farm.”

P&Z’s next regular meeting is scheduled for April 30.

One thought on “‘These Are Our Pets’: Applicant for Proposed Sanctuary Barn Makes Case to P&Z; Another Neighbor Objects”