Saying a New Canaan couple has misinterpreted and incorrectly applied both local ordinances and state laws, town officials last week unanimously rejected an appeal that would have forced their next-door neighbor to apply for a special permit. 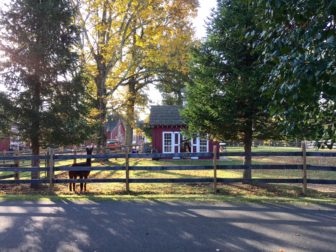 Looking at the subject property of a new appeal by Peter and Kathy Streinger, from the side of the Streingers’ driveway. Credit: Michael Dinan

The activities at 757 Oenoke Ridge Road do not rise to the level of farming as defined by the Connecticut General Statutes, and in any case the parcel likely is grandfathered since applicable town regulations came after the family that lives and enjoys their property there now have done so since before their adoption, members of the Zoning Board of Appeals said during their regular meeting.

The ZBA voted 5-0 to deny an appeal brought by Peter and Kathy Streinger, of 785 Oenoke Ridge Road.

“To me, it’s not even a close call,” board member Angelo Ziotas said at the Nov. 7 meeting, held at Town Hall.

Saying he was “sympathetic” to the Streingers because there is “no guarantee” that a future neighbor would keep the property as neatly as the current residents, the McQuilkins, Ziotas said: “Regardless, there is this Town Code that seems to contemplate people having all these kinds of animals, as long as they are it in compliance with all these rules and it’s not a farm.”

And the ZBA found—backing up interpretations of the New Canaan Zoning Regulations and state statutes, rendered by former Town Planner Steve Kleppin—that the McQuilkins are not operating a farm, though they keep chickens and alpacas on it, and large equipment is used to maintain it.

Ziotas said: “When we have an issue presented in this way, when they [the Streingers] decided to not hire a lawyer and spend this much time on these issues and present it in this way, I think we have an obligation. We have wasted a lot of people’s time here tonight to decide this on the way in which it was presented. And to me, it is not even a close call. The regulation that applies is the older regulation. There is nothing about what is front of us that puts that into question one iota.”

The decision bookends the latest appeal from the Streingers that focuses on their neighbors. The driveway that accesses the Streingers, who live on a 4.32-acre parcel, runs the length of the McQuilkins’ property, a 4-acre lot that includes a prominent, 1886-built home known as ‘Crajah House.’

The ZBA this summer unanimously denied a separate appeal brought by the Streingers, which focused on the McQuilkins’ use of an accessory structure as a guesthouse.

In both cases, the McQuilkins were represented by Steve Finn, an attorney with Stamford-based Wofsey Rosen Kweskin & Kuriansky.

“With all respect to the Streingers, this appeal is even weaker than the first one, which never should have been brought,” Finn told the ZBA.

Saying that the Streingers had made “numerous factual mistakes” as well as “misrepresentations” and “incorrect legal analysis,” Finn told the ZBA that “the Streingers base their claim on the wrong regulations and wrong definition of farming applicable to animals and pets.”

Specifically, Finn said that the appeal tries to a leverage a definition of ‘farming’ that was developed after the McQuilkins moved into their home.

“That definition does not apply retroactively,” Finn said.

One could easily argue that the use of this property for ‘farming’—and I’m not sure the keeping of animals is ‘farming,’ I don’t think it is—dates back to the 1800s, before the enactment of any zoning regulations. But we don’t have to go back that far. We only have to go back to Aug. 1, 2013 in order to clearly establish that the McQuilkins’ use of this property for their pet chickens, alpacas and horses does not require any special permit.

In New Canaan, ordinances that govern the keeping of animals are laid out in Chapter 6 of the Town Code. The New Canaan Zoning Regulations in defining ‘farming’ defer to Connecticut General Statutes 1-1(q).

The Streingers in making their appeal cite all three documents.

Peter Streinger reviewed his case and argued that an earlier decision from the Planning & Zoning Commission defined farming in New Canaan as activities taking place on a property, regardless of whether they’re also commercial in nature.

“We feel that the definition of ‘farming’ in the statute that is adopted in the Code clearly includes non-commercial activity based on the prior decision by the [Planning & Zoning] Commission,” he said.

Saying the McQuilkins’ use of their property has had a negative impact on the value of his home, Peter Streinger continued: “We think we need protection, some protection. We are completely at the mercy of what our neighbor wants to do … By having no setback, we are in a pos that is very difficult.”

However, members of the ZBA noted that the Town Code defers to the prevailing state law on farming, which does refer to selling and bringing commodities to market.

The ZBA also said some points of the Streingers’ appeal—such as an objection to the chickens on their neighbor’s property—are not viable. In the case of the chickens, for example, they’re fenced in on the McQuilkins’ land and do not cross the property line, which in any case is located beyond the fence itself, Kleppin said.

Members of the ZBA said they could understand the Streingers’ concerns, though those concerns appeared as if they also could apply to any New Canaanite who keeps a garden and wishes to gift his or her vegetables to a friend.

“I am not unsympathetic to this being further along than ‘apple tree and apple pie’—this looks to be something more closely resembling a farm, I get that,” Ziotas sad. “But that is not what we have been presented here. On the legal issues we have been presented and the way in which the neighbors have decided to present it, this was their choice. They didn’t hire a lawyer. They presented it.”

ZBA member Jeanne Rozel said she also would be concerned as a neighbor if dirt or dung piles were visible from her home, as well as farming equipment.

“I am sorry for the neighbors,” she said. “I wish they would try to work something out.”