Debbie McQuilkin on a recent morning stepped into the paddock she had built last summer on this historic, prominent Oenoke Ridge Road property. 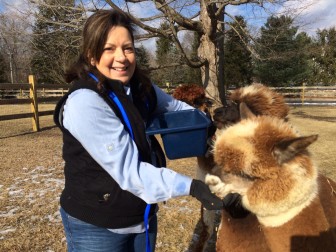 She scooped a bucket of grain from the shed and then turned to face the huge brown eyes and serene, slow-moving heads of her newest, most voluminous pets, explaining how all of this started, while—in a habit that animal-lovers often share—interspersing her human-to-human sentences by addressing the beasts directly, and in a higher-pitched voice.

“Abby is a little shy still. Go on, Gigi. Come here. This is Cashel. And Etain. Girls are such pigs. You go away. Come here pretty girl, it’s all right. They have their own buckets but when I am playing with them I want them to get used to us touching them. Oh goodness sakes. You should put your hand on Ali and feel how soft she is. Don’t you kick. This is Ali. Abby wont let you touch her. They’re all full of hay. They’ll be shorn in the spring and their fur will be processed. You’re such a pig. Abby is just so endearing with her moustache.” 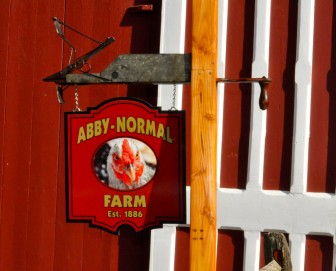 A property that McQuilkin like many New Canaanites had admired from a distance for years before she and husband Kevin purchased it in 2011, 757 Oenoke Ridge Road for decades had been a working farm—anchored by the antique 1886-built ‘Crajah House’ (more on that below) and four well-preserved, historic barns that stand today.

Now, under McQuilkin’s care and especially with the addition of the alpacas to a crew that includes two Newfoundlands (Mac, 9, and Ballou, 4), a blue front Amazon parrot (Pistachio, “he’ll take your finger off”) and a brood of hens (“Chick-chick-chick-chick-chick hi Scooter, hi girls, somebody going to let me pick them up? Come here chick-chick-chick-chick”), the prominent property is not only getting new life—it’s become a kind of spectacle for passersby and visitors. 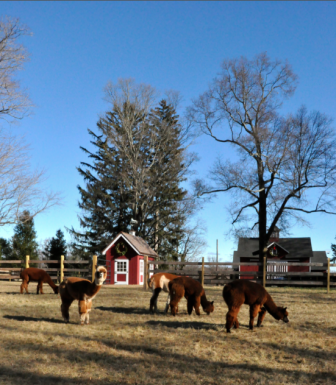 The Alpacas and Farm Life

McQuilkin after moving in on Oenoke Ridge began hankering for something low-maintenance and fun on the farm. She and her daughter, 17-year-old Molly (the family also has three older boys: Colin, 25, Austin, 22 and Kieran, 21) ride horses but those animals are kept up in North Salem, N.Y.

So last year, the McQuilkins visited Southwind Farms in Watertown. There, they met three baby alpacas (called ‘crias’) who had been born in January—Cashel, their only male, and Ali and Gigi—as well as Abby and Etain (pronounced ‘18’), both of whom had been born in June of 2008. 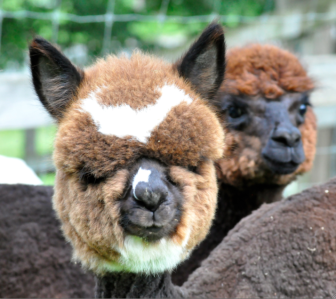 One of the McQuilkins’ alpacas. Debbie McQuilkin photo

“We fell in love and went out a couple of times and played with them, and then I decided—quit quit oh Cashel I’m touching you oh Abby I’m touching you—that we probably should not bring the babies home, we should bring the adult female home to teach her the ropes,” McQuilkin recalled from inside the paddock, located in a clearing out front that’s edged by sugar maple, oak, spruce and flowering cherry trees.

“Then we ended up deciding—or I did, I’m to blame—that we wanted a baby, a cria,” McQuilkin said. She added with her easy laugh: “At first he [husband Kevin] was like ‘no effin way, we don’t have time,’ and as per usual, I won.”

The five alpacas arrived as a group in August. 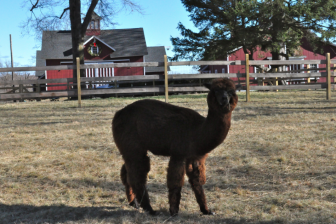 A McQuilkin alpaca in the paddock, barns in the background. Debbie McQuilkin photo

Helping out with the animals—when called for, cleaning up after them—is Randy “Uncle Buck” Brown, a well-known local man who oversees upkeep of the property and some of its structures.

McQuilkin said that her husband, an investment banker, in the early-going had been dead set against performing the rather earthy task of clearing the paddock of alpaca droppings, but has come to enjoy the outdoor work. 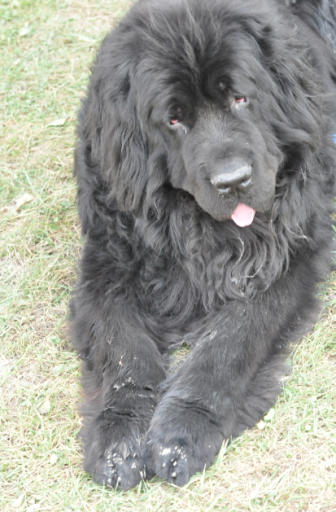 “I say he’s getting in touch with his inner farmer,” McQuilkin said.

Adding: “I actually am only allowed to do the poop on request. These guys do it almost all the time.”

When summer comes, McQuilkin said, the alpaca droppings can go directly into her flower and vegetable gardens, where she grows lettuce, kale, peas, carrots, strawberries, beets, fig trees and potatoes.

“OK so fun fact,” she said as the alpacas, the grain now gone, went back to eating the tops of the grass. “Alpaca poop doesn’t have a lot of nitrogen.” 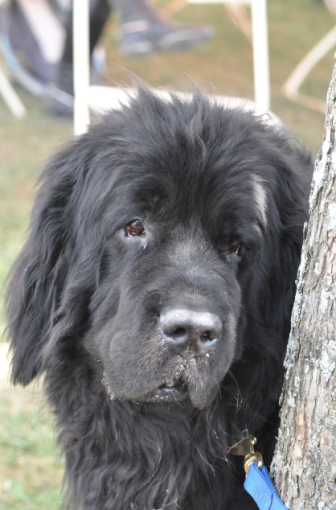 “I think you are born that way,” McQuilkin said of her affinity for animals. “I think you’re predisposed. I just always have loved animals and have always been a sponge about learning about them.”

It started in suburban Lakewood, Wash., where McQuilkin was born and grew up with her first horse (“I was just horse crazy”), Suzette, purchased from a priest, and Smokey, a Collie-Samoyed mix.

After high school, she met Kevin in Spokane, Wash. and the pair married in 1988, coming east after he finished graduate school at Kellogg School of Management to work for Chemical Bank in New York City. 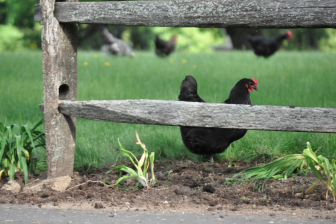 They lived with their black Cocker Spaniel, Sophie, at the Chesterfield condominiums near Ridgeway in Stamford and then bought their first house on Millport Avenue 25 years ago, starting a family here in New Canaan.

The three boys were born by the time the family moved into its second New Canaan home, a Ponus Ridge house on two acres. Sophie passed away and the McQuilkins got a golden Cocker named Checkers, then four months later they got their first Newfoundland, Gidget. Gidget passed away a few years ago, and Mac, their second Newfie, was just four years old when they McQuilkins moved to Oenoke Ridge. 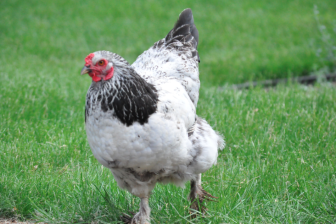 The Chickens at Crajah; Passersby

McQuilkin had no thought of getting chickens when she lived on Ponus, but did so after this last move to Oenoke Ridge.

“They follow me around like a pack of puppies,” she said while giving a tour of the four contiguous barns on the property—the oldest of which dates to about 1820, experts say.

“The original barn was probably this middle part,” McQuilkin said, opening the barn door, the hens at her heels, after shooing away a red-tailed hawk that had been circling above. “These are all standing stalls in here. I rescued some stall doors so these are the original stalls, this was an original freestanding structure and you can see where they ate and here’s an old water pump. Hi girls—they sneak up on you—hi Scooter hi Scooter come here, come here Scooter, come here Scooter. Some of them have names. Hi chick-chick-chick-chick-chick. I love this chicken. She’s so pretty.” 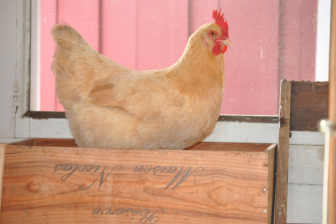 Asked how she decides to name some and not others, McQuilkin said: “I don’t know. They just sort of name themselves.”

The Newfies have worked out a routine where they herd the chickens back to “their side” of the property (near the barns, rather than the house) when “the girls” wander over.

“He [Mac] thinks it’s his job to move them back to the other side,” McQuilkin said as she moved into the coop to gather up the day’s eggs. “Hi Ruby. Oh my goodness you have been very busy under here.”

The McQuilkins’ are the only alapacas in New Canaan, according to Animal Control Officer Maryann Kleinschmitt. 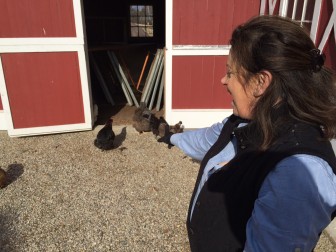 Debbie McQuilkin with some of her chickens, outside the original ca. 1820 barn on her property. Credit: Michael Dinan

When she got the animals, McQuilkin said she put a fact sheet on alpacas in the mailboxes of all her neighbors, together with a card inviting them to visit. One of her neighbors called and “said he was so excited, and his grandkids came for Christmas, and they all came over and played with the alpacas,” McQuilkin recalled. 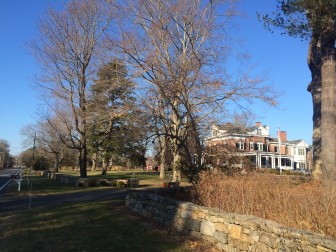 Crajah House—and the alpacas in their paddock—come into view as you travel north on Oenoke Ridge Road. Credit: Michael Dinan

The animals only have teeth on the bottom and cannot, and don’t, bite, she said.

Passing motorists often slow down and even pull in to the driveway when they see the alpacas, McQuilkin said.

They’ll pull back out if it appears nobody is home, but McQuilkin said that if she’s there, they’ll ask whether they can see the animals—which they’re always welcome to do. 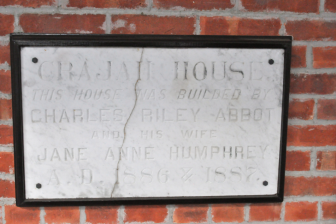 Alpacas or no, the home at 757 Oenoke Ridge Road—an antique with a wraparound porch and porte-cochére, an eye-catcher on the right off of 124 for motorists traveling northbound, with its well-preserved barns and caretaker’s cottage, is itself a landmark of the town.

New Canaan Historical Society Executive Director Janet Lindstrom called Crajah “one of the houses in New Canaan that stands out from all others and is noticeable.” 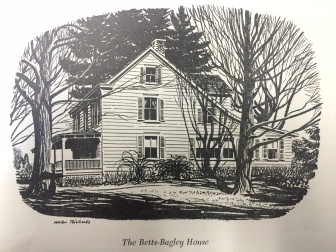 The original dwelling on Oenoke Ridge Road where Crajah House now sits was moved in 1886 to make room for the prominent brick house that still stands there. Photo courtesy of the New Canaan Historical Society

“Everybody has questions about it—who, what, when and where—it’s wonderful,” she said.

The home one decade ago made local headlines when an application came forward to subdivide its eight acres into a pair of 4-acre lots. At the time, it was thought that the historic barns would have to come down because a smaller-sized lot would put mean they put the structures on the property over coverage. (Lindstrom said there’s a workshop coming up this spring that deals with local ordinances and barn preservation, and we’ll have more news on that as soon as it’s available.) 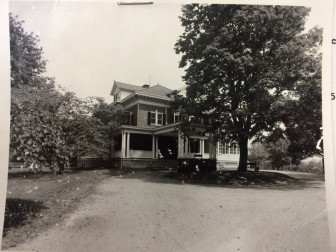 An early photo of Crajah House. Courtesy of the New Canaan Historical Society

A cottage had been built on the property in 1730—the so-called “Betts-Bagley” house—and it was moved to make way 1886 for a new home.

A marble tablet affixed to the front of the home still reads, in language that may recall Julia Ward Howe (a contemporary): “Crajah House. This house was builded by Charles Riley Abbott and his wife Jane Anne Humphrey, AD 1886 and 1887.”

The word ‘C-R-A-J-A-H’ is taken from the first letter of each of their names.

According to a news item in the Aug. 28, 1886 issue of the New Canaan Messenger, a weekly newspaper, 100,000 bricks arrived at the “freight depot” in New Canaan for a “new grand residence” to be built off of Oenoke Ridge, formerly ‘Canaan Ridge.’ 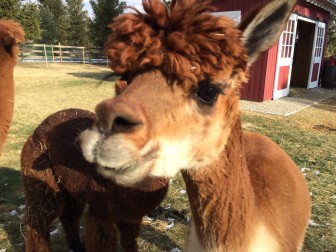 McQuilkin said she respects Crajah’s heritage, and that’s part of why she saw to it that, in constructing the shed in the paddock for the alpacas, she re-purposed stall doors found in the antique horse barn and windows that likely had been from the old house on the property.

The shed itself is finished in the same style and colors as the antique barns, and McQuilkin has chairs in the paddock where she and others have enjoyed the peaceful company of the alpacas. 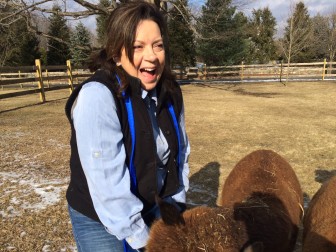 “They’re gentle. They hum and they’re peaceful—hi Cash, you already had yours, my little love bug, hi—very low maintenance and healthy,” she said. “I find it very relaxing. Cashel’s birthday was yesterday. Hi Cash. Hi Cash. When the time comes, the vet will come over and neuter him here. But he’s too young. Hi. Hi, lovey. They stay out here all winter and eat the hay. I had hay brought in for them, there’s hay in the barn, so all winter they it eat and there’s a heated water bucket right here.”

The founder and head of Southern Connecticut Storm Special Hockey, McQuilkin said she often brings kids involved in the program—children with developmental disabilities—back home and that they enjoy the alpacas’ company.

Part of the fact sheet that McQuilkin had given to her neighbors on getting the animals last summer notes: “Alpacas have been used to assist in therapy for a variety of mental and emotional disorders in both children and adults. Autistic children in particular have been observed to dramatically improve their ability and inclination to communicate when working with trained [alpacas].”

For McQuilkin, the alpacas offer a singular connection that transcends communication as it’s generally understood.

As she said: “I always tell my husband: What part of ‘Dr. Doolittle’ didn’t you get?”

8 thoughts on “Crajah House: The Alpacas of Oenoke Ridge”