The owner of a prominent Main Street building and adjacent lot that the town of New Canaan leases for sorely needed parking spaces is selling the property. 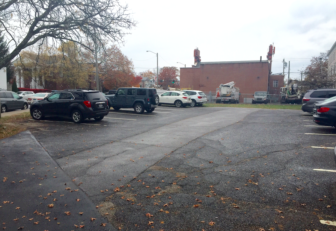 The brick ‘Telephone Co. Building’ at 140 Main St. has been owned by successive communications companies for decades, most recently by Frontier, and now is being offered by New York-based Cushman & Wakefield.

The .6-acre property is being divided in the sale between the structure and parking area, jeopardizing New Canaan’s use of the 18-space permitted lot.

According to First Selectman Rob Mallozzi, the prospect “should commit us to building the Locust Avenue parking deck.”

“This is a wake-up call for parking that the town controls,” Mallozzi told NewCanaanite.com.

The property had been on the market for nearly a year when Frontier acquired AT&T’s assets, according to Mallozzi, and the price at the time was around $600,000 to $700,000.

On a backburner for more than two years during the renovation and expansion of Town Hall, the Locust Avenue parking project has earmarked $4 million to it in the fluid 5-year capital plan for the current fiscal year. The project itself likely is two years away, Mallozzi has said. Town officials have said they would put in for $2 million in state-administered funds to help offset costs.

A traffic study unveiled in August found that the planned upper deck to the lot safely could include an ingress/egress point along Heritage Hill Road.

Town officials have been focused in recent weeks on the parking crunch downtown. Members of the Parking Commission are seeking ways to ensure that coveted free, 90-minute spaces in the heart of downtown New Canaan are turning over, and the New Canaan Chamber of Commerce is seeking ways to get more off-street parking options for downtown employees—an effort that likely must wait for the Locust Avenue deck to be completed, in order to move municipal employees’ vehicles out of the Park Street lot.

According to Mallozzi, New Canaan sells some 28 annual parking permits for the lot at $420 apiece, bringing in some $11,000-plus in revenue.

Cushman & Wakefield in promotional materials for the property touts its “prominent site with access to ample parking,” “exceptional demographics” and “outstanding regional accessibility.”

“The property’s location in New Canaan’s fashionable ‘Town Center’ sets it amid numerous upscale boutiques and national retailers, such as J. Crew, Ralph Lauren and Vineyard Vines, and makes it a prime suburban location for both retail and residential uses,” Cushman & Wakefield said. “The appeal of the property’s location is enhanced by its proximity to the nearby high demographic towns of Darien, Wilton, Westport and Ridgefield, the region’s primary commuter routes and mass transportation, and major Fairfield County employers.”

The marketing materials note that the lot is in the Business A Zone, calling it “a very flexible zone in New Canaan” that “presents the opportunity to acquire a well-sited parcel in a prime location with several possibilities for development by new ownership.”

“Allowed potential uses include, but are not limited to, developing the property as retail, restaurant/outdoor dining, residential units, a municipal facility, medical offices, and service establishments—each supported by virtue of its close proximity (many within walking distance) to a wide variety of retail and recreational amenities, business services and medical offices, major transportation routes, and excellent demographics.”

2 thoughts on “‘This Is a Wake-Up Call’: Telephone Co. Building, Parking Lot Downtown For Sale”