All but one grade involved in the New Canaan Youth Football will send a team this weekend into a championship or semifinal. The program serves third- through eighth-graders. 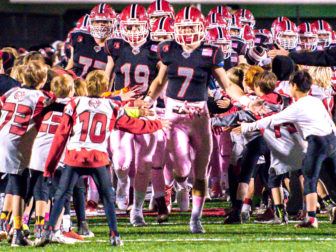 Best of luck to our boys competing for titles:

We’re hearing from some local historians that New Canaan’s backing of a Democratic candidate for president this week may have been the first time since 1964 that a Democrat seeking the nation’s highest elected office carried the town (LBJ). 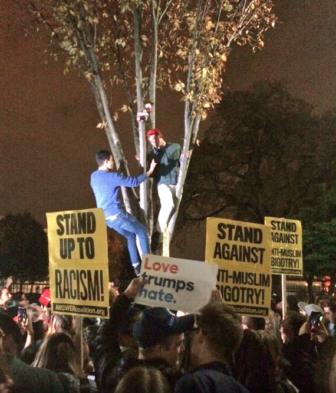 Chase Williams, NCHS ’14, in the red hat, up a tree outside the White House before dawn on Nov. 9, 2016, in the hours after GOPer Donald Trump won the presidential race. Published with permission from its owner.

Speaking of the election, NCHS ’14 graduate and George Washington University student Chase Williams, son of New Canaan Selectman Nick Williams, appeared in images that went viral in the wee hours of Wednesday morning, after he climbed a tree outside the White House, where a combination of protesters and celebrators had gathered after Republican Donald Trump won the presidential race. Chase, a varsity soccer captain when he was at NCHS, told us that he arrived there and “it was a madhouse” with people screaming and becoming increasingly belligerent. “I just wanted to take in the moment, with 2,000 people at one of the most famous buildings in the world, so I climbed a 15-foot tree.” Chase said he was wearing a “Make Connecticut Great Again” hat and some of those who were disappointed with the presidential race accosted him with words we can’t repeat here. “I’ve never seen anything like it, to be honest.” 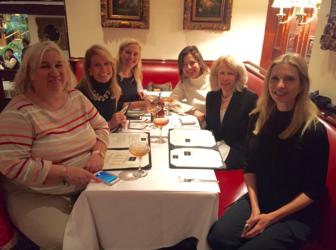 New Canaan Police are warning of a scam where someone representing himself as associated with the power company phones a local business, saying an electric bill must be paid lest power be shut off. The fraudulent Eversource rep demands to be paid via pre-paid cash card, and asks to be read out the numbers of the card—a method that actual Eversource workers never would seek, according to NCPD Chief Leon Krolikowski. “Eversource urges anyone who has any doubts about a call or a home visit to contact the company directly at 1-800-286-2000, and to report the incident to local police immediately,” the chief said.

The Park & Recreation Commission on Wednesday night voted unanimously to reappoint the 13 members of the Spencer’s Run Volunteers Committee:

Finally, here’s a gallery of photos with more news from around town: 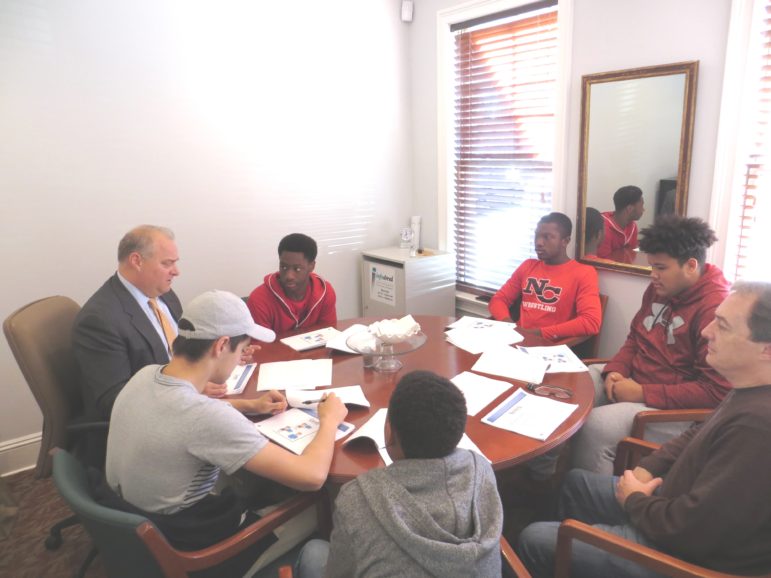 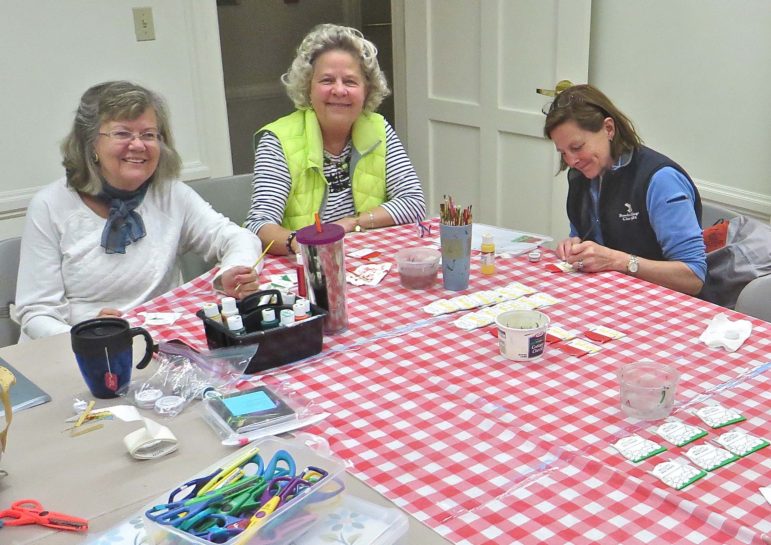 Meeting weekly to paint over 375 ornaments are (l. to r.) Faith Kerchoff, Judy Gilroy, and Judy Wiley. They are 3 out of about 20 people who volunteer their talents to cut, sand, drill holes, paint, ink,string, and label the ornaments. New Canaan Ornaments Sale Kickoff on Nov. 8. The collectible New Canaan Ornaments kicked off its sale on Tuesday from 10-am to 4 pm at the NC Historical Society. The set of 5 handmade ornaments for this year is Caffeine & Carburetors, Congregational Church, New Canaan Sign, the Playhouse and Waveny House. Ornaments sell for $15 each on a first come basis. They may be seen on the website- NC History.org under SHOP heading.

Here are some of the popular ornaments.

The annual Saxe Middle School fifth and sixth grade production this year will be Elf JR The Musical. Performance dates are Friday, November 18th at 7pm and Saturday, November 19th at 2pm. Both performances will take place at the New Canaan High School Auditorium. Based on the beloved holiday film, this hilarious fish-out-of-water comedy follows Buddy the Elf in his quest to find his true identity. Elf JR The Musical features songs by Tony Award-nominees, Matthew Sklar and Chad Beguelin, with a book by Tony Award-winners, Thomas Meehan and Bob Martin. Buddy, a young orphan, mistakenly crawls into Santa’s bag of gifts and is transported to the North Pole. The would-be elf is raised, unaware that he is actually a human, until his enormous size and poor toy-making abilities cause him to face the truth. With Santa’s permission, Buddy embarks on a journey to New York City to find his birth father and discover his true identity. Faced with the harsh reality that his father is on the naughty list and that his half-brother doesn’t even believe in Santa, Buddy is determined to win over his new family and help New York remember the true meaning of Christmas. Under the direction and choreography of Lauren Nicole Sherwood, along with Joe Gergle, Musical Director and Matt Blank, Stage Manager and Assistant Manager, audiences will be transported to the North Pole and New York City and reminded of the true meaning and spirit of the holiday season. More than 100 students have dedicated three afternoons per week to practice their singing and dance routines. Students also volunteered as stage crew and have been working tirelessly to transform the high school auditorium and stage. Tickets may be purchased online at https://sites.google.com/site/saxeelfjr2016/home or in person one hour prior to each performance.

Three new members have joined the Silvermine Board of Directors. Mark Carta, Robin Jaffee Frank, and Shirley Leung will each serve a three-year term. “I am very pleased to announce the election of three highly accomplished professionals to the Silvermine Board of Directors,” said Board Chair Rose-Marie Fox. “These new board members bring extensive experience in the fields of art curation, fundraising, grant writing and governance. Silvermine has launched impressive plans for its centennial in five years. The talents and passion of these new directors will help Silvermine actualize these goals. Excellence and dedication to the mission are key pillars of Silvermine’s active board, and we will continue to expand the board with highly qualified professional leaders.”