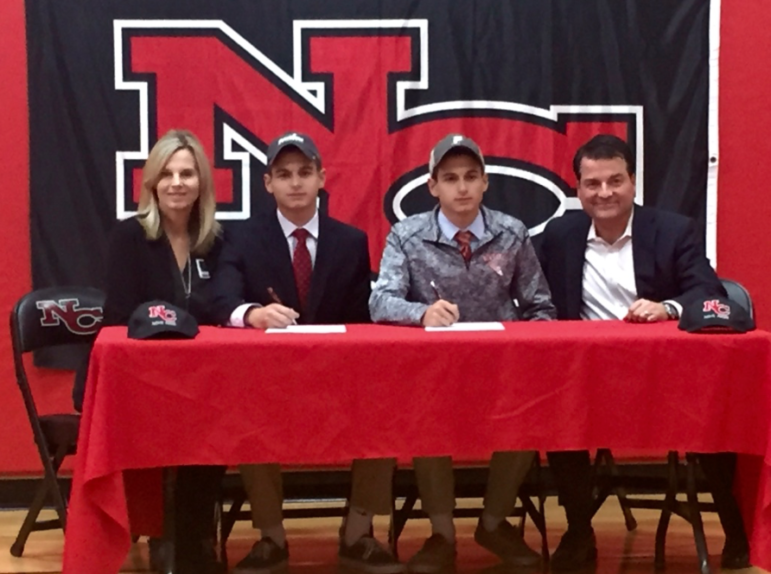 Wyatt and Henry Spangler, who will do track & field at Providence, with their parents Bob and Joanne on Nov. 9, 2016. Wyatt: “There was no track program up until high school but we’ve had great coaching here, just able to develop the skill and take it to the college level.” Henry: “It was good preparation. We didn’t really step up to the plate until last year when we started to step up our training and that’s when we really saw the growth.” Credit: Michael Dinan 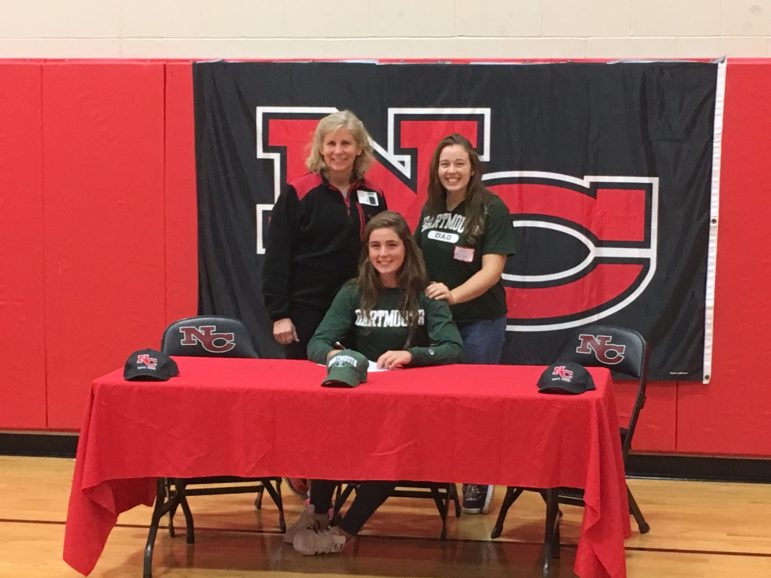 Claire Campbell, who will do crew at Dartmouth College, pictured here with her mother Laura and friend Siobhan, on Nov. 9, 2016: “NCHS really doesn’t recognize crew as a sport. I learned to row in South Norwalk, so it was through the coaches and my siblings all did it. Maritime Rowing Club and New Canaan Crew. It’s an amazing team. It teaches you a lot about life, and I liked it a lot.” Credit: Michael Dinan

Robby Jones, a baseball standout, will attend the University of Connecticut, pictured here with his parents Robert and Flo on Nov. 9, 2016: “Well pretty much every year from youth onto freshman, every single year they try to really improve the program every single year as we progress. And now that this year I am captain I really just try to implement what my previous captains did for me because they had such a big impact on how I played and their leadership translated over to me.” Credit: Michael Dinan

Molly Keshin, will play softball at the University of Virginia, pictured here with parents Eric and Tish, on Nov. 9, 2016: “A lot of girls from the FCIAC have gone on to college for softball, so it’s a good inspiration for us because we saw that it was possible from our area. For New Canaan, Danielle [Simoneau] and Joel [Geriak] are the best possible coaches.” Credit: Michael Dinan

Ryan O’Connell, who will play lacrosse at University of North Carolina, pictured here with his parents Patrick and Robin on Nov. 9, 2016: “New Canaan keeps growing. From the time that I was playing youth lacrosse to where it is now, it’s a whole different program. I think our class is a pioneering class where we started a pretty good tradition and things have gotten better throughout the program. The coaching we have here is absolutely phenomenal, it is bar none the best that I have had in any sport.” Credit: Michael Dinan

Rachel Keshin, who will play softball at the University of Virginia, with her parents Eric and Tish, on Nov. 9, 2016: “Well I think it helps that the FCIAC is so competitive with softball. And our coaches are fantastic. They have helped us so much. They have talked to coaches for us. They help us develop our skills so they’ve helped get us where we are.” Credit: Michael Dinan

Jackson Appelt, who will play lacrosse at the University of Virginia, with his parents Garth and Kim on Nov. 9, 2016: “I think ever since you are a little kid here in New Canaan it makes you want to dream big. You play on teams with team names that are big college teams and it fosters a really good environment. Since I was at a young age, I’ve been mesmerized by the idea of playing college lacrosse. As I got older, I started realizing the work that needed to be put into it. I just fell in love with the game. I’m so thankful for New Canaan and what this program has done for me. The network and bonds that the kids have, their relationships between youth and high school, is awesome.” Credit: Michael Dinan

Cameron Rhind, who will dive at the University of Pennsylvania, with his parents Nicole and Jaime on Nov. 9, 2016: “The YMCA is a really supportive program, I feel like the whole team is one big family and having that support group really was able to get me through the process really well. My coach [Joe Somma] is also a really great person, he’s the one who connected everything. The whole New Canaan program is really good.” Credit: Michael Dinan

Andrew Bauersfeld, who will play lacrosse at the University of Vermont, pictured with his parents Rose and Gary on Nov. 9, 2016: “It’s great how in this town, we all start so young. I have been playing lacrosse with this group of guys since fourth grade, and it’s great that we have learned the fundamentals since that early age. It gives us an advantage as we grow up and get older. It really helps.” Credit: Michael Dinan

Edward Rudman, who will swim at the University of Virginia, with his parents Steven and Alexandra (his sisters Carol and Elizabeth also were in attendance) on Nov. 9, 2016: “I started seriously swimming my freshman year in high school. I’m a little newer to it. I have to credit Dave [Fine]. He got me into the sport, convinced me to do it year-round, and I think that I definitely improved more during high school season than club. I think that’s the way it is set up, it’s easier with the team and you don’t want to let down your teammates. We are really close, basically a family, and your goal is not letting down the team.” Credit: Michael Dinan

Drew Morris, who will play lacrosse at the University of Maryland, with his parents Keith and Cindy on Nov. 9, 2016: “It’s tremendous. I think the coaching has helped a lot, because a lot of the people who have been through this have played college lacrosse, have played professional lacrosse, and come back and helped us and taught the younger kids. As a younger kid, you just look up and want to be the person playing college lacrosse. And having those coaches come back and help and offer that experience, it’s tremendous.” Credit: Michael Dinan

John Norton, who will row at Brown, pictured with his mother Pam on Nov. 9, 2016: “I rowed for New Canaan Crew at Maritime Rowing Club. I have been rowing there for eight years and I have really grown up there, with the same coaches and same team. And through that I feel really prepared to compete in college and I’m looking forward to the next level.” Credit: Michael Dinan 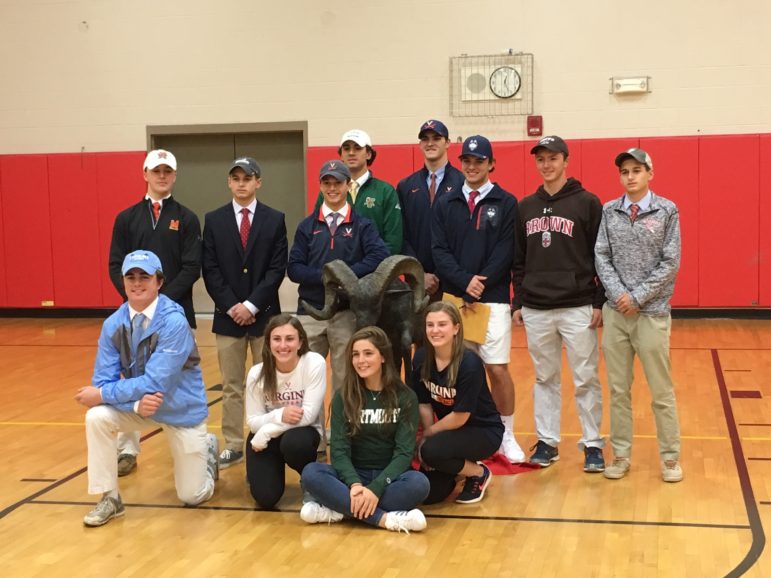 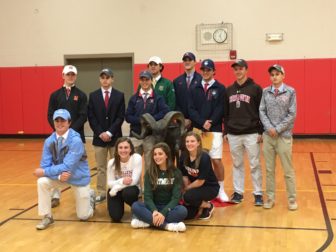 The gallery above includes photos from a signing ceremony overseen by NCHS Athletic Director Jay Egan, held at in the auxiliary gym at New Canaan High School. We also asked each student about how their experience doing youth and/or high school and varsity-level sports in town helped prepare them for college. (The Ivy League-bound seniors’ letters could be called “likely letters” in that those schools, though they offer no athletics scholarships per se, can issue an agreements signifying that they’re committed to admitting a recruited athlete.)

The tally of 13 marks the largest ever group of NCHS student-athletes signing the early letters, Egan said.