After finishing on the outside of the FCIAC tournament field, the New Canaan girls soccer team was eager to get back out on the pitch and see if it could duplicate last year’s impressive state tournament run when the 2015 girls rode upset after upset all the way to the CIAC Class LL semifinals. 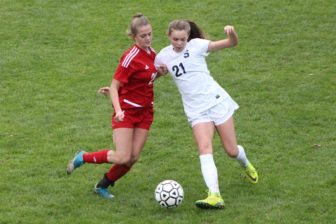 And after a two week layoff, which included a CIAC seeding error that caused their scheduled first round contest on Monday at Middletown to be cancelled, the Rams were finally back in action on Wednesday afternoon—this time at familiar FCIAC foe Staples, who became New Canaan’s opponent after the CIAC’s error was resolved.

But after a promising first 18 minutes of back-and-forth action, the Wreckers took the lead with a goal in the 19th minute and never relinquished it, shutting the Rams out in their season finale, 3-0.

“I was encouraged by our start,” head coach Rich Hickson told NewCanaanite.com. “I thought we had a good start to the game which was nice with how long it’s been since we last played. But then they [Staples] get a goal and while we did have a good chance to answer and even it up soon after that, it didn’t happen. But, hey, that’s soccer for you. Then they get another one minutes later to keep the momentum with them and they kept it the rest of the game. You don’t enjoy having to play a team like Staples because they are really good.”

New Canaan did come ready to play as the first 18 minutes of the contest only yielded one shot on goal for the Wreckers—one that junior goalkeeper Kendall Curtin saved. However, the Rams offense was unable to take advantage of the strong effort from the back line with junior Katherine Reiss generating the only shot on goal in that time period. 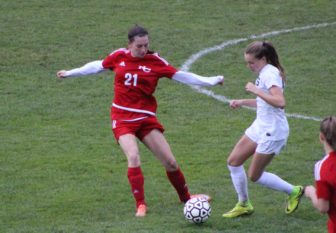 Then just seconds into the game’s 19th minute, with the ball up in the air off a ricochet, Staples freshman Katie Ialeggio sped by New Canaan defender Eliza Pohle to get to the ball and shoot it past Curtin for a 1-0 lead.

New Canaan almost answered right back, though, when less than a minute later, Julia Ozimek sent a corner kick to the front of the net and connected with Kendall Patten’s foot. Patten’s shot was saved by Wrecker goalkeeper Anna Sivinski but she couldn’t corral it, leaving a mad scramble for the ball in front. But while senior co-captain Madison Starr and Ozimek each got a foot on it, no shot could be sent on net before the Staples defense cleared it out of traffic.

That attempt proved to be New Canaan’s best chance at getting one in the back of the net.

In the 24th minute, Staples freshman Reese Sutter sent a corner kick into the mob in front of the net. And Sutter’s ball connected with teammate Morgan McWhirter but her shot bounced up high off the crossbar and back into play. Staples next headed the ball back toward Curtin’s net but the keeper swatted it away. It was not far enough, however, as the third shot attempt proved to be the charm for the Wreckers when senior co-captain Charlotte Rossi sent the ball to the back of the net and put Staples up two. 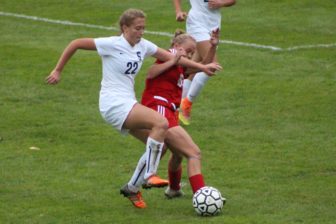 That score would hold for the remainder of the first half. Coming out of halftime, what the Rams needed to do was keep the Wreckers off the board and try to generate enough offense to get themselves back in the game. Unfortunately, neither came to fruition as just over four minutes into the match’s latter half, Staples senior co-captain Tia Zajec was found by a teammate open on the right side of the box in front and she put the feed home. That gave Staples a 3-0 lead and effectively ended any hopes of a comeback from the Rams.

The loss completes the 2016 campaign for New Canaan, who finish the year 6-7-4. It also completes Hickson’s first season with the program, an experience the head coach is grateful for.

“It was great,” Hickson said when asked about his first year with the team. “The girls really helped me with the transition into the program. I’m incredibly proud of their efforts this season. We set out at the beginning of the year to be in the mix for both FCIAC’s and states. And while we missed out on FCIAC’s, we were definitely in the mix as it came down to our final [regular season] game. And we made states, it’s just unfortunate that it ended so soon. But I feel this year is definitely a step in the right direction for us.”

“We’re going to miss our seniors,” Hickson said. “That group of five girls is tremendous and they were great for our team this year. We wish all of them well in the future.”

But while those five have now taken the field for the final time as a Ram, the bulk of this year’s squad is expected to return next fall as the program boasts a bevy of underclassmen who possess promising talent.

“We have a big junior class as well as a good amount of sophomores,” Hickson said. “So knowing that we should return a lot of this year’s group next year definitely has me excited for the program’s future.”