The following appeals were filed recently with the New Canaan Parking Bureau by ticketed motorists.

“I am an Fairfield resident. I am staying at my daughters’ on Laurel/Hidden Meadow Lane and I was meeting a friend at Ching’s for lunch. There is no parking around—so I went behind Town Hall and parked. Did not realize there are prepaid spots + machines. We do not have them in Fairfield. This is my 1st offense and have a clear record. I am looking for a reprieve. Thank you.” 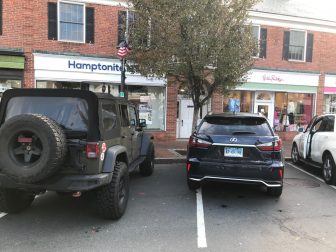 “Parked on Main St by Chase Bank left @ 11:45. Went to Walgreens returned @ 12:15 and parked up by the fire house, not on the same block but on Main St. I was to believe that it is no the same block.”

“Thought I paid at the machine w/ a credit card & that everything was okay because the screen showed it was good until some time the next day I believe, so was surprised when I received a ticket. I’ve since learned I was supposed to print a receipt, otherwise the transaction gets cancelled. Hoping to pay for just the parking $6.” 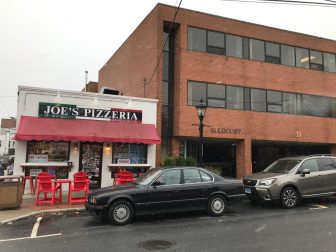 Should be able to get two cars safely parked in front of Joe’s. Credit: Michael Dinan

“Like we spoke about I have been buying the full week of parking passes via Boxcar every Monday from the station since we moved to Darien in mid July. On this particular Monday I did the same thing that I usually do but the service at the station must have been down and the reservation didn’t go through as it usually does. I realized when I got to the office and rebooked not knowing that between that time I was ticketed for not reserving ahead of time. You can see that I buy every week and am not trying to scam my way out of a ticket, I understand that the reservation didn’t go through until after the ticket was issued so I am asking for an exception given my history of reserving every week prior and since the ticket date.”

“I was making a delivery on Main St. where I thought the sign said I was able to park for 2 hours. The individual that issued the ticket explained to me that there was a fire hydrant. I was not aware. P.S. I also deliver the pay roll for the Town of New Canaan and it’s difficult to find parking at times.”

“I only missed the parking limit by 3 minutes. There should be a tiny grace period.”