There’s no evidence that anyone is buried in the portion of the ‘Maple Street Cemetery’ site that’s owned by the group that wants to develop a new apartment-and-condominium complex alongside it, according to the office of the New Canaan town attorney. 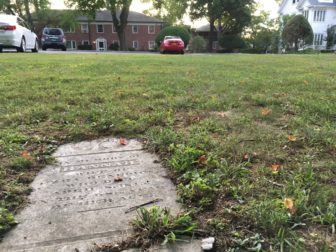 There also exists no record that New Canaan ever intended to take title to the sliver of land, which was not conveyed to M2 Partners LLC—developer of the proposed ‘Merritt Village’ complex—by any of the entities that are allowed to own cemeteries under state law, according to Peter Gelderman of Westport-based Berchem, Moses & Devlin, P.C.

For those reasons, “it is the opinion of this office that the parcel is not a cemetery,” Gelderman said in a memo Monday to the New Canaan Planning & Zoning Commission. 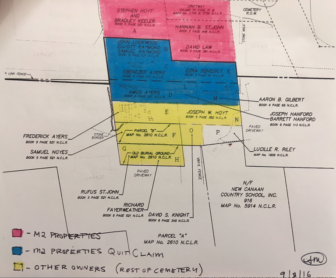 A color-coded map shows the three “sections” of the Maple Street Cemetery. The pink portion, owned outright by M2 Partners, contains no buried bodies and is the only section pictured here that falls within the group’s property—the property line runs between the blue and pink sections. Courtesy of M2 Partners

“There could be facts or circumstances that if proven, would change the conclusions of this opinion. For example, if it is shown that bodies are in fact buried at the subject property or if it is shown that the Town or a cemetery association or ecclesiastical society ever took title outside of the chain of title, then M2’s ownership interest would be in doubt.”

Sought by P&Z following a public hearing two weeks ago, the opinion could settle one outstanding question surrounding Merritt Village, which would occupy a large portion of the block of Park Street between Mead and Maple Streets.

P&Z is scheduled to discuss Merritt during a special meeting at 7 p.m. Tuesday—the sixth public hearing at which the topic will take center stage.

M2 returned to P&Z last month with a scaled-back plan that would see 116 units go in at Merritt (instead of 123) in four 3.5-story (instead of 4-story) townhouse-style buildings, with some of the proposed structures coming down to two stories and improvements to the originally proposed parking scheme.

The 1852-built cemetery—and specifically its preservation and the question of M2’s ownership and right to develop around it—has emerged among some opponents of Merritt Village as one reason to hit pause on the project. They also have cited the development’s density and height. Advocates have said Merritt Village will bolster New Canaan’s housing stock in important ways, expanding a cramped rental market and diversifying condos for desirable in-town living, especially among seniors.

Originally, the Merritt owner and developer drew up a plan to cordon off and restore the cemetery, but withdrew the offer in the face of criticism and misinformation from some quarters—a position he reiterated at last month’s hearing.

Under Connecticut law, no person or corporation other than a town, ecclesiastical society or cemetery association may own a cemetery, according to Gelderman.

“M2 Partners LLC is a private company and therefore would not be allowed to own a cemetery,” he said in his letter to P&Z. “Cemeteries are generally defined as a place where dead people are buried; a burial ground; a graveyard. The statutes do not define the term cemetery, except in the context of dispute resolution, in which case a cemetery is ‘any place performing interments on or after Oct. 1, 1995.’ This definition is limited to situations involving disputes and does not apply generally.”

The key question, he said, “is whether the above-described property is a cemetery.”

The primary reason it isn’t is because it appears no one is buried there, according to Gelderman.

“In fact, there is evidence that the original owners of the plots [Stephen Holt, Bradley Keelerand Hannah B. St. John] and their descendants are buried at Lakeview Cemetery. It is probable that the plots were purchased by the aforementioned families for the purposes of burial, but the evidence suggest that that purpose was never fulfilled.”

Gelderman cites a 1951 ruling that emanated from Bethel, where a cemetery association in 1938 had purchased a 33-acre parcel “for the express purpose of burying ‘deceased members of the Masonic order in good standing and in their families.’ ”

“The property was prepared for use as a cemetery (the land was cleared, a pond was created and roads were built) with funds furnished by one individual. Before any bodies were buried, that individual passed away and all work ceased. The land was placed in receivership and became overgrown. Seven years later the receiver conveyed the land to three individuals with no reference to cemetery use. Nevertheless, the three individuals cleared the land, repaired the roads and cleaned the pond on the property and then created a new cemetery association (Fairlawns Cemetery Association). The new Association then crated a map of burial plots and a price list. No plots were sold nor were any bodies buried. In 1946 the town began considering new zoning regulations that would not have allowed cemetery use on the subject property. As a result, the Association posted a large sign on the property that read ‘Fairlawns Cemetery, Non-sectarian.’ The Association even applied for a permit to erect a crematory on the property, but withdrew the application in the face of stout opposition. The town then adopted a zoning regulation that expressly prohibited cemetery use in the zone where the subject property was located. The court determined that since the property had never actually been used as a cemetery (no bodies were buried there), the use had been abandoned and the property was not a cemetery.”