Saying any change to New Canaan’s most treasured asset merits inclusive and careful consideration, town officials on Wednesday called for a full public vetting of a proposal to place Waveny House on the National Register of Historic Places.

In thanking the nonprofit New Canaan Preservation Alliance for its drive, research and conscientiousness in gathering information on what inclusion on the register could mean for the town (more on that below), members of the Town Council also agreed to proceed slowly in order to inform and hear from residents. 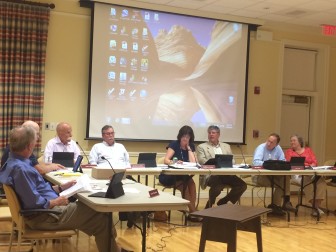 The Town Council at a July 16 special meeting, held in the Douglas Room at Lapham Community Center. Credit: Michael Dinan

Chairman Bill Walbert said that when New Canaan deals with a “treasure” such as Waveny House, “the public needs time to digest things.”

“As much as your group is absolutely to be commended for all the volunteer work you do to move this ball forward and the sincere interest you take in the historic facilities in this town, to preserve them for all of us—thank you so much–I think a political reality is when dealing with Waveny House, the public needs time to digest things,” Walbert said during a special meeting of the Town Council, held in the Douglas Room at Lapham Community Center.

Ultimately the Town Council decided that it would further research what inclusion in the National Registry entails, offer the matter up for public hearing and make a formal decision no sooner than September. 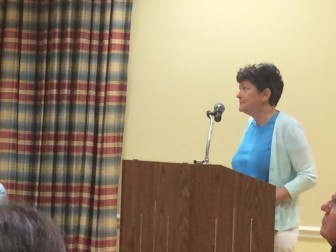 Addressing the council, NCPA President Rose Scott Long described inclusion on the National Register as “largely ceremonial” though “it does increase the recognition of an area’s historic relevance and encourages preservation.”

The nonprofit group in 2012 held a 100th anniversary celebration at Waveny House, attended by the actor Christopher Lloyd, a Lapham who grew up there.

A group within the NCPA—including an architect, preservation architect, engineer and a former owner of a major New York City-based construction firm—“has been working with the town of New Canaan on a number of potential projects for Waveny House,” Long said.

“Together we have developed documents for the restoration of the veneer wood flooring and the cleaning of the limestone fireplace in the Great Hall,” she said.

Long added: “I come before you to request that you give due consideration to this proposal to nominate Waveny House here in New Canaan to the NRFHP, qualifying that property for all available funding and grants, granting Waveny the recognition it deserves and complying with the directive in New Canaan’s Plan of Conservation and Development.”

Nomination to the National Register typically is a 3- to 6-month process with an estimated cost of $10,000, according to Long. The NCPA itself is offering to pay the fee.

Designed by Greenwich’s W.B. Tubby and built in 1912 under the Laphams, Waveny House is named for the River ‘Waveney’—part of the Norfolk Broads, an area of eastern England from which the Lapham family hails, historians say. Waveny Park has been public property since Mrs. Ruth Lapham Lloyd sold it to the town in 1967—Lloyd’s mother, she passed away 30 years ago.

Town Council Vice Chairman Steve Karl said he attended the 100th birthday celebration in 2012 “and I thought it was one of the best events I’ve been to at Waveny and I’ve been to a lot of them.”

“Having Christopher Lloyd there speaking about the history and the fact that he grew up in that house, it was one of the most amazing deliveries that I’ve heard in town in a long time,” Karl said. “I had no idea about some of the history that went on there, so it was fascinating.”

Karl also underscored what Walbert had said about residents’ deep ties to Waveny House and the council’s responsibility to that sense of connection.

Karl said the public mainly would want to know whether inclusion in the National Registry in any way ties New Canaan’s hands as regards management of the property.

The only municipal building in New Canaan that’s on a Register of Historic Places is Town Hall (now under renovation and scheduled for a May 2015 reopening), a 1909 structure designed by celebrated architect Edgar Alonzo Josseyln after he’d won a competition for the right to do so.

Town Council member Joe Paladino described Waveny House as a building that already has many “watchful eyes” on it and noted that although the National Registry comes with “no strings attached,” taking money in forms such as matching grants for capital improvements likely comes with specific and binding guidelines (which may well be agreeable, he added).

The Park & Recreation Commission at its May meeting voiced support for the NCPA effort to register Waveny House—one month after the nonprofit ran a workshop on what inclusion on the state and National Registry entails.

Town Council member Penny Young at Wednesday’s meeting asked whether anyone from the Park & Rec was present to discuss that group’s questions and concerns, and was advised that comprehensive meeting minutes are available online (here).

[Editor’s Note: The article has been corrected with the correctly spelled surname of the Waveny House architect.]

3 thoughts on “Town Council to Preservationists on Waveny House: ‘The Public Needs Time’”