The town has selected a Realtor to work with as it tries to find a future use for the former Outback Teen Center building, officials said last week. 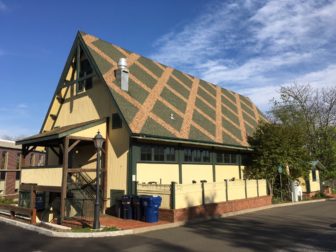 However, the municipality hasn’t signed a contract with that Realtor “because there are two entities who have expressed interest in leasing space in the building,” according to Town Councilman Penny Young.

“And until those negotiations are completed, either effected or rejected, we are not going to engage a Realtor,” Young said at the Council’s regular meeting on July 18, held at Town Hall. “So that process is underway. It takes time, but it’s underway.”

Inherited by the town three summers ago, the Outback has been a subject of wide discussion among New Canaanites ever since. Officials have estimated that it costs New Canaan about $50,000 annually just to maintain the vacant building. Municipal funding bodies in January elected to put off a $50,000 investment in architectural and engineering plans that would be needed in order to make repairs and code-compliant upgrades to it. The town also rejected a proposal to house a new “alternative high school” program there, saying New Canaan first must determine whether the Outback can be rented.

Though suitors have emerged in the intervening months, including at least one Elm Street retailer, no formal lease agreement has materialized.

Town Council Chairman John Engel asked at the meeting just when the two parties interested in the Outback now are expected to make a decision.

“When do we think we will know?” Engel said. “Meaning that we are either moving forward with a Realtor or one of the current proposals?”

Young said that question “is out of my control and really sits in the office of the first selectman.”

First Selectman Kevin Moynihan, a guest at the meeting, did not address the Council.