Town officials recently approved the payment of about $7,000 in privately raised funds to a Trumbull-based company that will install plaques at Town Hall honoring New Canaanites who have served in wartime. 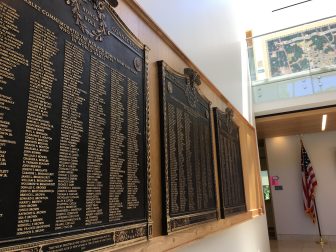 The additional plaques for the new major entrance of Town Hall will list the names of residents who served during the Korean War, Vietnam War and Operation Desert Storm of the Gulf War, according to Bill Oestmann, buildings superintendent of the New Canaan Department of Public Works.

The Board of Selectmen at its June 27 meeting voted 3-0 to approve $6,962.76 for A.W. Construction LLC—funds raised by VFW Post 653 and the Exchange Club of New Canaan. VFW Post 653 Commander Peter Langenus said later that New Canaan’s American Legion Post 30 has given an “incredible commitment of time and money” to the project.

During the meeting, held at Town Hall,First Selectman Rob Mallozzi said: “I applaud the effort.”

“I think we are all so grateful of the VFW in particular and the Exchange Club, too, for what they have done. It is exactly what we wanted when we reopened Town Hall. We wanted that front entrance to reflect and honor all those who served.”

The approval itself amounted to settling a payment made from a “special projects account” of the town prior to the end of the fiscal year, officials said.

New Canaan for nearly a century has honored local men and women who have served in the U.S. Armed Forces, listing their names on bronze plaques featured in Town Hall. The first plaques were created in 1923, honoring veterans of the Revolutionary War, Mexican-American War, Civil War and World War I—the same year that New Canaan erected the Wayside Cross at the foot of God’s Acre, also a WWI monument. On Veterans Day last year, officials unveiled newly completed plaques listing the names of World War II veterans from New Canaan.

It isn’t clear just when the new plaques will be installed.

When they are, the honorifics will fill out wall space that generate wide interest among passersby.

“I frequently walk into Town Hall and see visitors stopped, looking up at plaques,” Selectman Nick Williams said. “Which I think before it was dark in the ‘old’ Town Hall but to see people taking their time to pay their respects, it’s a fabulous thing.”

Williams and Selectman Beth Jones joined Mallozzi in voting in favor the payment. According to Oestmann, VFW Post 653 Commander Peter Langenus is eager that the organization help fund the plaques and future projects “not put the burden on the taxpayers for this effort.”

Oestmann said he himself spends time reviewing the plaques and noted that his own family is represented on them “which is very powerful.”

“They are looking to educate people about what really took place in this town,” he said.

Langenus said after the meeting: “Our goal from the beginning has been that not one cent of taxpayer money would be used for the project, Thanks to the commitment of the VFW, the American Legion, the Exchange Club and private citizens we will achieve that goal.”

3 thoughts on “Town Hall To Get Plaques Listing New Canaanites Who Served in Korea, Vietnam and during Gulf War, War on Terrorism”