Sidelined last month because the asphalt was to be ripped up to install natural gas lines, the repaving of a set of town roads now is back in play, town officials say, as the utility company unexpectedly is taking a different route into New Canaan. 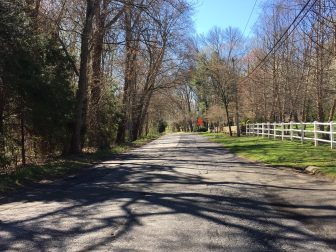 Residents of Spring Water Lane, Adams Lane and Hillcrest Road have waited years to have their roads repaved because they live along a gas line route that Eversource had proposed in the past, First Selectman Rob Mallozzi said.

Yet “it now appears that Eversource is going to be coming up state Route 106 and avoiding local roads coming into town” from Stamford, Mallozzi told NewCanaanite.com.

“So, unfortunately, we had to pull back on a promised area of paving in town,” he said.

The Board of Selectmen last month shifted the would-be project for Spring Water-Adams-Hillcrest to three stretches of Ponus Ridge—a plan that was “met with an incredible amount of disappointment and consternation by the neighbors because, quite frankly, they had been waiting all that time to have their streets paved,” Mallozzi said.

“So I am happy to report that we have a definitive answer from Eversource stating they will not lay any gas infrastructure in the foreseeable future in that area of town.”

Mallozzi vowed to “fast-track” the Spring Water-Hillcrest-Adams area for repaving this summer, saying it will be finished by September.

The project “absoultely was a priority” for Mallozzi as well as Selectmen Beth Jones and Nick Williams before it was sidelined, he said.

Asked about the new plans, Eversource spokesman Mitch Gross issued the following statement: “We have been in conversations with New Canaan town officials about gas expansion for the past few months. They have, and continue to be very positive. But there is still a lot of work to do. We do have a preferred route and continue to exchange and share information with the town. But until all aspects of the proposed project are agreed upon, it would be inappropriate to provide any details. We continue working hard on our plan and remain optimistic that we will be able to bring natural gas to the town soon.”

Representatives from state agency and town officials have presented different versions of events in the past, though renewed efforts to bring natural gas to New Canaan—after plans had stalled through a period of three-plus years—have been marked by a spirit of cooperation.

Town officials say Eversource is working on a timetable that would bring natural gas up 106, to Farm Road and South Avenue by the fall of 2018. Large buildings that would benefit from the resource would include not only South School, New Canaan High School and Saxe Middle School, officials say, but also East School.

Mallozzi said Eversource appears to be “quite committed” to the aggressive program and that officials will work toward hammering out a formal agreement over the next couple of months.

“But we are focused today on getting those folks who thought they’d get [the repaving of] their roads started, done in the near future,” he said.