Sheri Bickley Dean, co-president of the Town Players of New Canaan (with Cheryl Petrone), had her first experience with the venerable troupe through her father, Tony Bickley, one of its very early members. 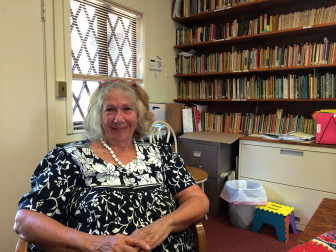 Co-president of The New Canaan Town Players Sheri Dean sits down in the business office of the Powerhouse Theatre on a beautiful Wednesday morning.

Ms. Dean, a theatre major at Rollins College in Florida, had been part of a Summer Stock theatre that allowed her to get an equity card (the starting point for many professional actors) one year before graduating college.

However, after marrying at an early age and having twins, she decided that motherhood took precedence over starting an acting career in New York. “I had to make the decision, ‘Do I really want to try and do the New York beat or not?’ and I said no because I really wanted to be a mom,” Ms. Dean recalled this week from the business office at the Powerhouse Theatre.

Despite the change in plans, Ms. Dean said she felt that she could be a part of the Town Players of New Canaan because of her experience with the program as well as her love for theatre.

“Having grown up with Town Players—and I knew the group—I said, ‘Well, Town Players is what I love and I’m a strong believer in community theatre,’ so I did it,” Ms. Dean said.

And in so doing, connected with a local group that has a rich history.

The New Canaan Town Players had its first official meeting on Dec. 13, 1946, historians say. At that time, the players were simply a group of young actors and actresses who enjoyed performing in the community but didn’t really have an official theatre to work from. They’d travel around to different schools and churches with everyone from school teachers to ministers getting involved with productions.

As the group became more active, growing from two shows a year to the current number of five, and because schools had begun to start their own programs, the Town Players of New Canaan needed a place to showcase their performances consistently throughout the year. And so, after scrupulous cleaning out and re-imagining of the interior design, the Powerhouse Theatre was born from the old power plant next to the Waveny House in 1983.

Ms. Dean said she’s become increasingly involved with the Town Players as a regular performer and director through the years.

“I’ve directed easily 30 shows and probably acted in close to that number myself. I’ve also done almost everything from being president to box office to costumes to props to writing PR to cleaning bathrooms to painting scenery flats,” Ms. Dean said. “I just believe in the process, I believe in the concept of it. And while I love to direct acting was my first passion and I’ll act whenever a good role comes along.”

Ms. Dean said that she enjoys mentoring new people off the stage as well as on it.

“You always want to keep it going so that more than one person knows how to do something like running the box office system,” she said.

In addition to her duties at the Powerhouse Theatre, Ms. Dean runs her own calligraphy service under the name A Fine Line.

“I was in the corporate world for almost 20 years and then I decided once the kids were through college to get a part-time job which ended up being at the Herrell Shop in Darien —which was Darien’s equivalent of The Whitney Shop,” Ms. Dean recalled. “I originally was in retail but once I moved to the stationary department, that’s where I really got all my training and background.”

And after four years working there, Ms. Dean was forced to re-invent herself once more when its owners decided to retire.

“Since my sister Tanya and I were executors for our parents’ very dearest, best friend, who was a retired actress and artist, I had some discretionary money and I decided to try it out on my own, and I have been doing this for about nine years,” Ms. Dean said. “It’s very project-oriented which I think is what I love to do because it keeps everything new.”

The Town Players of New Canaan’s latest show, a production of Ken Ludwig’s Tony Award-winning comedy “Lend Me A Tenor” starts Friday at the Powerhouse Theatre in Waveny. Here’s a trailer for the show:

Lend Me A Tenor – Town Players of New Canaan