Tyler Michael Reeb, age 34, passed away unexpectedly on Monday, October 14, 2019 at his home in Richmond, VA. 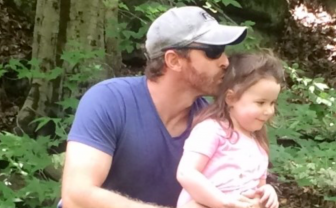 Tyler grew up in New Canaan, CT and was an avid sportsman involved with baseball, wrestling, lacrosse, and football. He approached life with a contagious sense of humor that came easy to him, sincere sensitivity towards others, a strong work ethic, and a powerful will. Tyler was always fond of the outdoors, happy to play alongside his sister in the woods and pastures of the family farm in Vermont and enjoy winter sports. He earned a BS in Psychology from Widener University in PA and worked with underprivileged youth in that area during college and after graduation.

Tyler had been drawn to the military at a young age and ultimately enlisted in the United States Marine Corps on November 26th, 2007, attending recruit training at Paris Island, SC. Upon graduation he reported to the School of Infantry East for training as a Rifleman. After completing his training Tyler was assigned to 1st Battalion 8th Marines (1/8), Camp Lejeune North Carolina.

Tyler was not one to take the easy route, and immediately undertook the arduous process of becoming a Scout Sniper. He underwent the Scout Sniper selection at his first opportunity and was selected into the platoon. Tyler’s first assignment was Radio Telephone Operator and point man for a deployment to Iraq in support of Operation Iraqi Freedom 9-2. While there, Tyler and his platoon conducted numerous security, counter IED, and reconnaissance and surveillance (R&S) missions in and around Al Assad Air Base.

Upon return from Iraq he immediately reported to 2nd Marine Division Scout Sniper School where he graduated Scout Sniper Basic Course 1-10 as the class High Shooter. Tyler was assigned to Eagle 3 as the Assistant Team Leader. Prior to deployment he also attended the Mountain Scout Sniper Course at the Marine Corps Mountain Warfare Center in Bridgeport California. Tyler deployed to Afghanistan in support of Operation Enduring Freedom from September of 2010 to March 2011. Over the course of the next seven months Tyler conducted over 100 Scout Sniper missions in the Helmand province supporting 1/8 in both Musa Qala and Nowzad Districts. Directly engaged with the Taliban on a daily basis he was recognized for courage and awarded the Navy and Marine Corps Achievement Medal with combat distinguishing device “V”.

Upon redeployment to Camp Lejeune, Tyler was meritoriously promoted to Sergeant in recognition of his exceptional maturity and professionalism. Driven to continue to lead Marines in combat, Tyler reenlisted and committed to deploy with the battalion again. As one of his platoon’s senior Team Leaders, he was instrumental in the unit’s development during pre-deployment training. Tyler assisted in the planning and execution of the selections and subsequent training and development of new Marines. He also attended the Advance Scout Sniper Course, Martial Arts Instructor Course, Joint Fires Observer Course and the Survival, Evasion, Resistance and Escape Course in Maine. Deploying again to Afghanistan in support of Operation Enduring Freedom from January 2012 to July 2012 as a Team Leader for Eagle 2 Tyler and his Marines supported operation in the Sangin and Kajaki Districts of Helmand Province. Seeking every opportunity to take the fight to the Taliban, Tyler led his Marines in over 100 combat missions including four battalion-level and two regimental-level operations. Again, in recognition of his leadership and courage Tyler was awarded the Navy and Marine Corps Achievement Medal with combat distinguishing device “V” (second award).

As a direct result of his impeccable professional reputation and achievements in 1st Battalion 8th Marines, Tyler was hand selected for duty at Scout Sniper Instructor School, Quantico Virginia. He was assigned as a field skills instructor and soon became the lead Field Craft Lead Instructor. Tyler was recognized as a man of humility, known for emphasizing that “Amateurs Advertise” when mentoring professional conduct with his students. Tyler instructed land navigation, stalking and observation. Tyler also competed in the 2015 U.S. Army International Sniper Competition earning the highest finish of any Quantico team at the time. He also attended several instructor courses and became a Combat Marksmanship Coach. Tyler had the chance to train Marines from across the Marine Corps through his contributions to the Scout Sniper Basic Course, Advanced Scout Sniper Course, and the Scout Sniper Unit Leaders Course. For his professional achievements in Quantico he was awarded the Navy and Marine Corps Commendation Medal. After eight years of service, Tyler was promoted to the rank of Staff Sergeant just prior to his honorable discharge from active duty in December of 2015.

Tyler continually sought operational excellence over routine civilian life, and after considering a number of professional options joined the US Department of State, Bureau of Diplomatic Security, where he held an instructional and leadership role within the Office of Mobile Security Deployment. There he helped develop, coordinate, implement and revise tactical training for protective forces. Tyler also served as a Subject Matter Expert and advisor to senior managers, and was noted to be a highly regarded member of the training cadre.

A service of remembrance will be held at noon on Friday, November 22, 2019 in the Semper Fidelis Memorial Chapel at the National Museum of the Marine Corps in Triangle, VA. A cortege will assemble at 1:30 p.m. in Quantico National Cemetery for a 2 p.m. committal ceremony with military honors. All of Tyler’s family, friends, fellow Marines, and associated professionals are welcome to attend. An open gathering will follow at the Globe & Laurel Restaurant in Stafford, VA.

In lieu of flowers, donations may be made to the irrevocable TYLER M. REEB TRUST F/B/O HAILEY B. REEB, care of Michael C. Reeb Trustee, 456 Chandler Road, Chester VT 05143.  Expressions of sympathy or questions for the trust fund can be sent directly to the Reeb family at treebfamily@gmail.com.