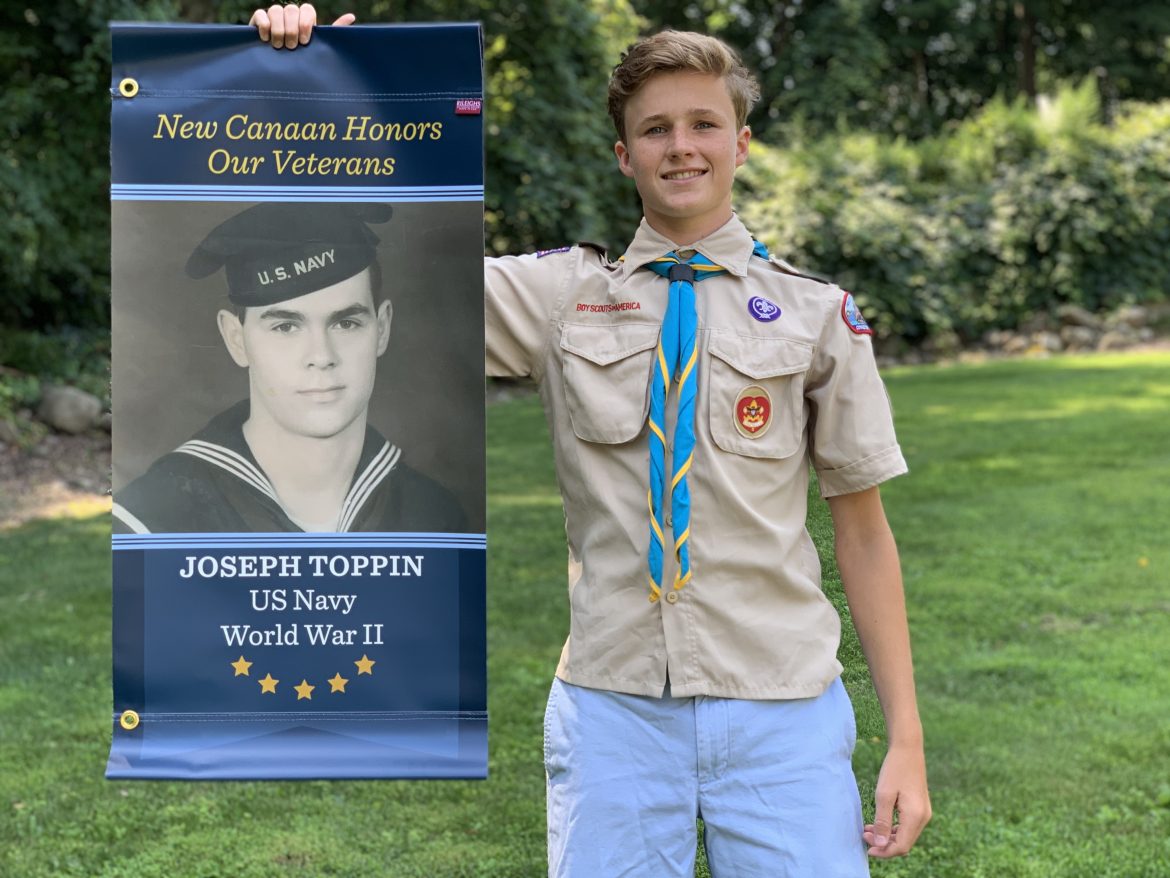 Jack Goetz of New Canaan, with one of the New Canaan veteran banners. Contributed

A New Canaan teen is working on an Eagle Scout project to honor local veterans.

Jack Goetz, a rising New Canaan High School junior, said he plans to hang 35 banners featuring veterans from lampposts in the downtown for three weeks around Veteran’s Day in November.

A Boy Scout for around five years, Goetz is seeking to earn the rank of Eagle Scout, and is required to complete a service-related project.

“This was a project I chose because it’s a visual way to represent all that the veterans have done for our country,” Goetz said. “I think they don’t get enough credit—we don’t see it on a daily basis, how much they’ve served and I think we need to give back.”

His project, titled “New Canaan Honors Our Veterans,” also has personal relevance. Goetz said that many of his family members have served in the military.

“It’s an important issue to me,” he said. “I’m also interested in pursuing a career in the military,” he added.

The idea for the banners came when Goetz contacted the commander of the local Veterans of Foreign Wars Post 653, Peter Langenus.

A U.S. Army captain in Vietnam who also served as a colonel during Operation Desert Storm, Langenus was in Summit, N.J. at the time, where he had noticed a similar project. After seeing a photo of the banners in Summit, Goetz said he “immediately knew” he wanted to do something similar.

An intern this summer in the office of U.S. Rep. Jim Himes (D-4) in Stamford, said the number of banners is limited by cost and space available on the poles.

After publishing a letter about his project at the beginning of July, Goetz said he’s had a lot of interest in it.

“The response has been amazing,” he said. “We’ve had a ton of veterans send us information and it’s just been unbelievable.”

Goetz said that he has information about “almost” enough veterans to fill all 35 banners planned.

Funding for the Eagle Scout project has come from donations from the New Canaan Exchange Club and the VFW.

Asked whether he needed to raise any more money to complete the project, Goetz said, “A little extra funds would be great, because that means we could hang a few more banners, but it’s not contingent upon extra money.”

If there are any readers who want to contribute to the project, Goetz suggest they donate to the VFW directly.

“They are handling all the money because as boy scouts, we can’t, really,” he said.

If a veteran or veteran’s family is interested in participating in the project, an email including a scanned photo, name, branch and war served in can be sent to newcanaanvfw@gmail.com.

2 thoughts on “‘We Need to Give Back’: Local Teen’s Project to Honor New Canaan Veterans”