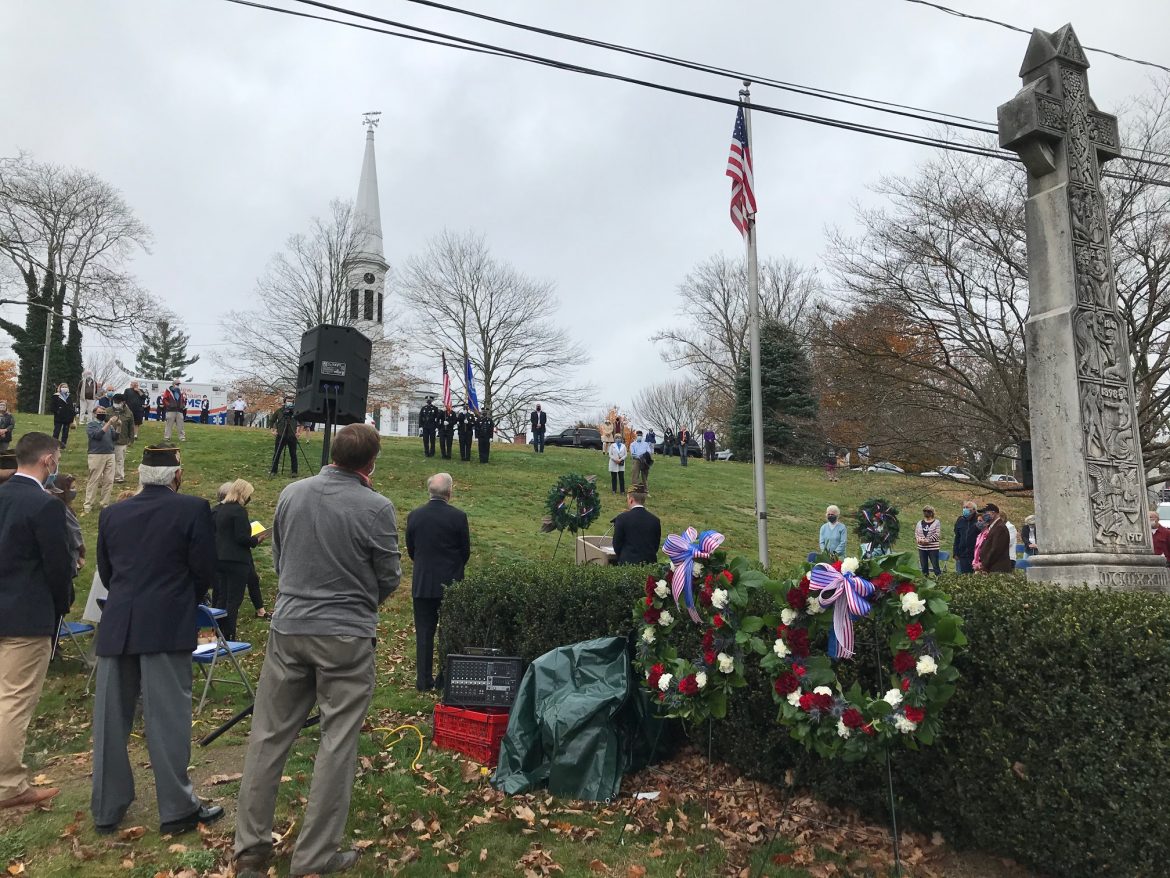 A crowd of more than 100 people gathered for the Veterans Day ceremony on God's Acre on Nov. 11, 2020. Credit: Michael Dinan

For Tyler Nash, a former U.S. Army infantry officer who served for nearly seven years, primarily with the 75th Ranger Regiment and 10th Mountain Division, the two things that make the contributions of veterans so special are conviction and love. 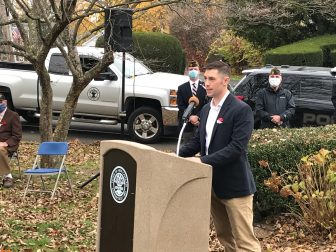 Citing a 1906 quote from President Teddy Roosevelt, that “a just war is in the long run far better for a man’s soul than the most prosperous peace,” Nash on Wednesday morning told a crowd of more than 100 people gathered at God’s Acre for the town’s annual Veterans Day ceremony, “This isn’t a quote that advocates for violence or war.”

Roosevelt followed by saying, “We should as a nation do everything in our power for the cause of honorable peace,” Nash said, addressing residents, town officials, police, firefighters and EMTs wearing masks and spaced apart before the Wayside Cross (itself a WWI memorial) on a warm, overcast day. 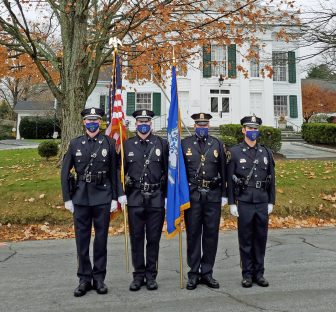 “But it is a a quote about conviction,” Nash said. “The United States is the land of the free and the home of the brave. We were created as a nation to face and overcome obstacles head-on as a unified people, and whether known or not, we represent the hopes and dreams of people all over the world. Our veterans believe this ideal to a fault. They have seen the faces of the oppressed in the darkest corners of the world, and stand guard to ensure our protections.”

Nash also quoted British author G.K. Chesterton, who once wrote, “The true soldier fights not because he hates what is in front of him, but because he loves what is behind him.” 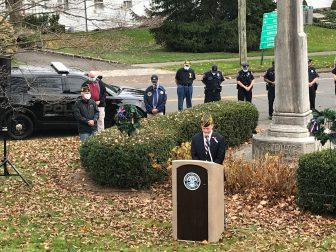 New Canaan’s Russ Kimes III, assistant fire chief and emergency management director of the town, is commander of the Howard M. Bossa and Peter C. Langenus Post 653 of the Veterans of Foreign Wars of the United States, as well as a U.S. Marine Corps veteran. At the Veterans Day ceremony on God’s Acre, Nov. 11, 2020. Credit: Michael Dinan

“The American veteran knows the love of a unit, those brothers- and sisters-in-arms who make up a family by shared purpose,” Nash said. “The American veteran, in turn, learns to love his fellow Americans who come from all walks of life. This is an undistorted and un-divided love of country and way of living. Thoughts of others are more second-nature than thoughts of self. We would all do right by remaining committed to our veterans as they are committed to us.” 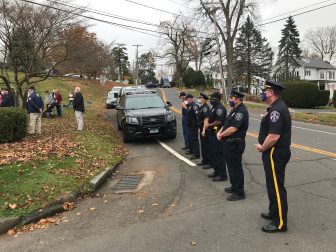 It was led by Russ Kimes III, who is a commander of the Howard M. Bossa and Peter C. Langenus Post 653 of the Veterans of Foreign Wars of the United States, as well as a lifelong resident, assistant fire chief and emergency management director.

The ceremony included the Pledge of Allegiance, playing of “Taps,” presentation of colors by the New Canaan Police Department Color Guard, moment of silence, prayer led by 1965 New Canaan High School graduate and former U.S. Marine corporal and Vietnam War veteran Brian Vanderheyden, introduction of Nash by First Selectman Kevin Moynihan and comments from Lisa Melland of the Hannah Benedict Carter Chapter of the Daughters of the American Revolution. 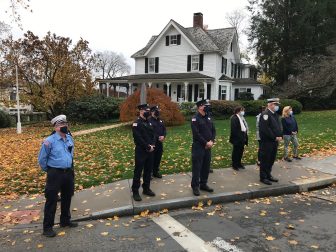 Kimes also read out the poem “In Flanders Fields”—recalling a signature former VFW commander Langenus, a former U.S. Army captain in Vietnam who also served as a colonel during Operation Desert Storm, and who died in January.

Vanderheyden in an opening prayer said, “Oh Lord almighty, remember those who died fighting to protect the dignity and the freedom of mankind. We thank you for this opportunity to honor our veterans on this 102nd anniversary on the end of the ‘war to end all wars.’ Let us always honor the memory of those brave men and women who sacrificed so that we may experience freedom. Let our hearts be compassionate and our minds clear and determined in giving them that honor and respect. And let us be dependent on the loving kindness of the Lord, our God, as we remember the veterans. Let us be courageous protectors and true guardians of freedom.” 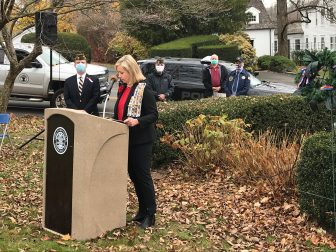 Lisa Melland of the Hannah Benedict Carter Chapter of the Daughters of the American Revolution. At God’s Acre on Nov. 11, 2020. Credit: Michael Dinan

Melland during her comments on behalf of the DAR said that she’s been studying and working to produce a video focused on Capt. Stephen Betts, “New Canaan’s most illustrious contributor to the American Revolution.”

Though there’s a monument in Lakeview Cemetery dedicated to Betts, Melland said, as well as a plaque at the back of St. Mark’s Episcopal Church, which Betts had helped to found, his gravestone in a cemetery at Weed Street and Sunset Hill Road “was practically illegible, as so many gravestones of that era are.”

“The porous stone worn away by the ravages of time,” she said. 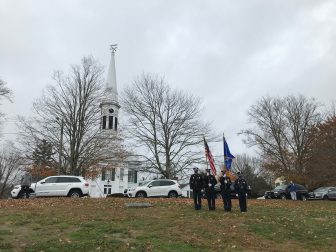 Melland reviewed some of the ways that New Canaan tries to ensure that its veterans are not forgotten—such as the plaques in Town Hall and the Gold Star Walk at Mead Park. She said that she discovered that Betts owned a slave named Jessie Betts, who is buried near the captain and to whom Melland dedicated much research on learning of his existence, and that she hopes the town and DAR find a “way to keep these names in our collective memory and as accessible New Canaan history for years to come.”

“He had done so much to aid the cause of American freedom,” Melland said of Capt. Stephen Betts.

She added, “By the captain’s own account, he fought in 13 battles of the American Revolution, even receiving a commendation from General George Washington for his valiant effort at the Battle of Norwalk.”

Kimes in closing out the ceremony noted that the 1918 flu pandemic was underway at the time World War I ended, and that in part, on Veterans Day people remember “all of the doctors and nurses.”

“In particular, those in our town and our schools, and also our New Canaan volunteer Emergency Medical Services, for what they do because they truly are on the front lines of this fight against COVID,” Kimes said. “And we as veterans know what a fight is like, and we really do truly appreciate everything you are doing for us and the community.”