Weed Street has been reopened for traffic, according to Sgt. Carol Ogrinc of the New Canaan Police Department. The motorist in Friday morning’s single-car accident, involving a utility pole, suffered injuries though they weren’t serious, police said. 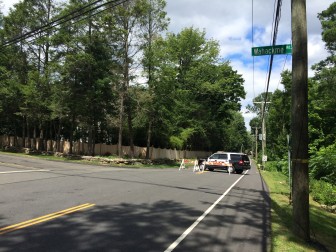 Weed Street above Wahackme is closed Friday until further notice, after a car struck a pole on Weed near Sunset Hill, police say. Credit: Michael Dinan

A single vehicle hit a utility pole at Weed and Sunset Hill Road, and it isn’t clear when the roadway will reopen to traffic, according to Sgt. Carol Ogrinc of the New Canaan Police Department.

The pole needs to be replaced, she said. The motorist’s condition isn’t clear.

Utility workers could be seen working on scene around noon Friday.

NewCanaanite.com will have more updates as they become available.