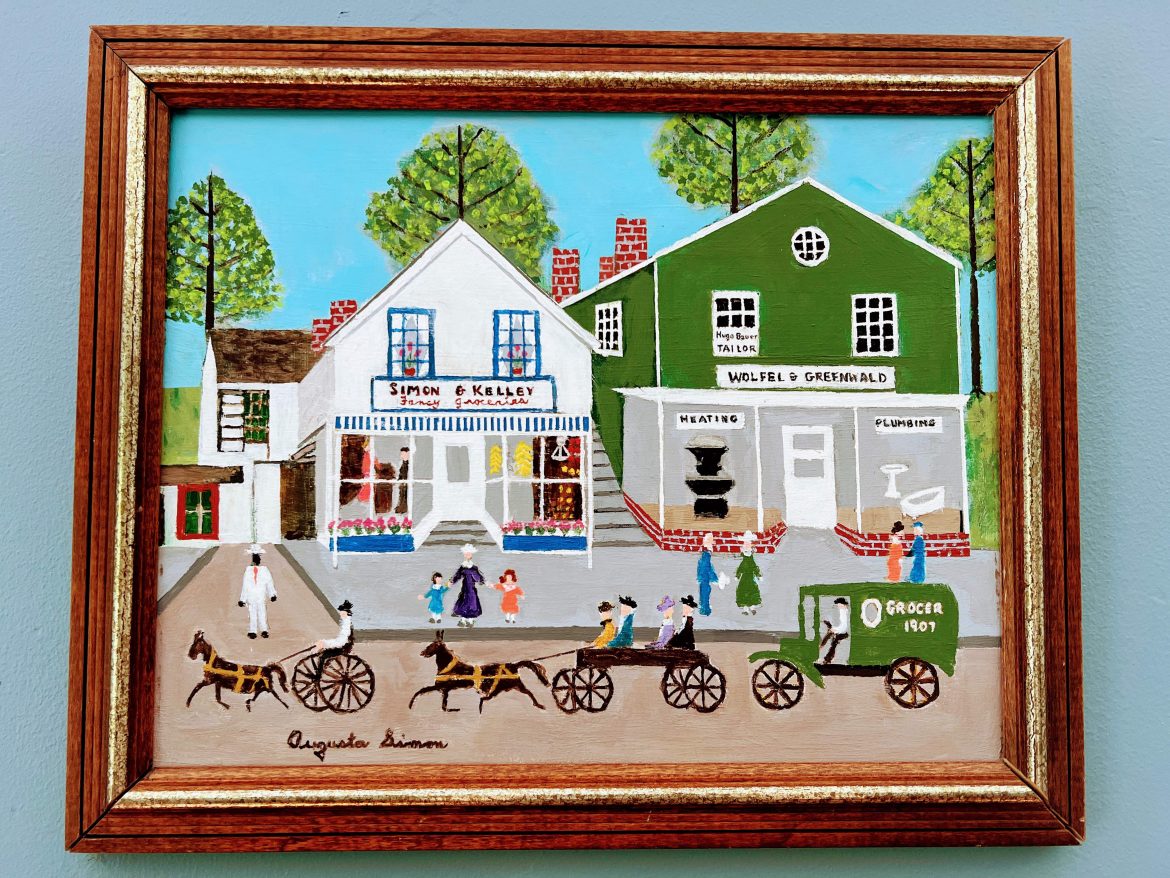 If I’m certain of anything, it’s that the former New Canaan Post Office building at the corner of Park and Pine streets needs to be a bowling alley.

It’s not, of course, because it’s a Merrill Lynch. And, fine, private wealth management is probably a more practical (not to mention more pandemic-proof) endeavor than bowling. But New Canaan Fantasy Commercial Real Estate™ isn’t about rationality. It’s about creating a fictitious downtown utopia from available commercial space, a game in which startup costs and market viability are no object. So let’s admit it: a bougie bowling alley with live music, clever cocktails, and an inspired but kid-friendly small plates menu would have been a pretty sweet way to spend your next birthday party/ date night/ snow day/ Tuesday. We’d call it Canaan Lanes, and it would offer a charmingly small six lanes of standard or impossibly Yankee candlepin bowling, all clad in midcentury blond woods with vintage, hand-painted signage. Your Merrill guy would have loved it, too.

While Manhattan becomes one long street-level succession of Duane Reades and Chase ATM vestibules, and the rest of the world seems only to connect the dots between Amazon fulfillment centers and Jiffy Lube stores, I wonder what we could add to this town to make it even more perfect, to inch the Next Station to Heaven a little more heavenwards. A roller rink? A plant store? A wine bar? Some magical amalgamation of ALL THREE?  There are no bad ideas in New Canaan Fantasy Commercial Real Estate.

To play, I talked with a few friends and neighbors who have lived here for decades about what they miss from the New Canaan of the eighties, nineties, and aughts. I began to piece together the picture below, one that cures our pandemic-wrought isolationism and Amazon dependence, one storefront at a time. Investors and developers, if you see anything you like, take it and run with it. I’ll be happy to accept a couple points on the back end. 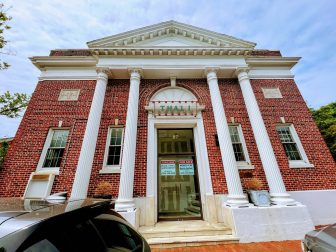 This building has been empty for nearly seven years.

New Canaan doesn’t yet have its star on the New England craft beer map, but this 1911-built bank building is precisely where all that can change. Think: stainless-steel brewing tanks in the back, the exposed brick interior flooded with light, and the perfect spot for a sunny Saturday pint or two of the only session IPA made in New Canaan. Our dog-friendly brewpub would serve an inventive, Southern spin on classic pub grub, like loaded, baked sweet potato skins, a pimento cheese dip, deviled eggs, and maybe the occasional toasted ham and cheese slider. The name is anyone’s call, but I’m partial to simplicity: The Bank.

See? We just made your first ad. 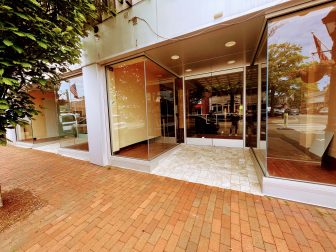 My neighbor, a New Canaan resident of 25 years, mentioned a long-gone store called Lamakers, a menswear shop known for its reasonable prices and exceptional customer service. “They kept cards on file for each customer, so I could stop by and pick something out for my husband, and they’d already know all his sizes.” I love this level of personal attention in customer service, and it’s something a small town can do particularly well in the increasingly impersonal world of online shopping. What we really need right now, though, is personalized service AND a foolproof way to handle Father’s Day.

Buying gifts for men is tricky business. There are only so many belts/ generic golf trinkets/ Patagonia jackets an adult human male can own. What most of them really want is to be James Bond anyhow, and vintage Aston Martins are generally beyond my birthday shopping budget. I propose we fill this space with a shop called Dude and make it the one-stop-shop for everything guys don’t even know they want. Maybe they can sell a few choice brands of leisurewear and office clothes for men (I’m thinking Vuori for weekends, Todd Snyder for weekdays, and vintage Air Jordans for midlife crises) but let the peripheral gifts be incredible. Original Star Wars memorabilia? A vintage Malloch’s fly-fishing reel from Scotland? A Sonos-compatible walnut record player with impeccable sound? That kind of stuff. The stuff that makes you look like you puzzled over it for months,  when all you really did was go downtown. 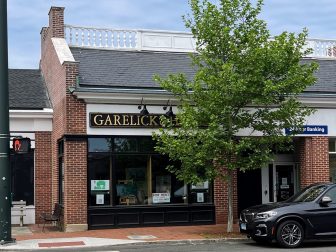 Can we not just get Garelick & Herbs back in there? Their Rice Krispie treats were good.

48 Elm Street (was Your CBD store, now Your Store With A Giant Crack in the Window) 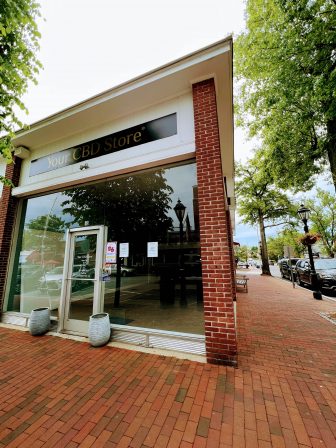 Let’s hope the next tenant sticks around in this spot!

There’s a good reason starry-eyed recent college graduates go to work for Google and Goldman rather than the stationery business. Paper goods are hardly at the dizzying frontier of consumer categories, with their unsexy projected growth rate of 4% per decade and total lack of innovation. Stationery brand conferences probably don’t even have luxury yachts OR special guest appearances from A$AP Rocky, so why even bother with the card biz?

Because acknowledging birthdays with a little folded piece of paper is what separates us from the animals, that’s why. Everyone I spoke with misses Milestones and Papyrus. And while The Whitney Shop has a lovely selection of bridal and personalized stationery, New Canaan also needs a breezy little joint where you can buy informal paper goods, birthday cards with jaunty little pugs, cupcakes, or insinuating bottles of rosé on them. You know. Lady stuff.

So let’s pop an independent paper shop in this light-filled corner spot, add in some gifts and those big, blocky, 06840 notepads that Milestones used to carry that I can’t seem to find anywhere else. They’d also have bullet journals, fancy calligraphy pens, and washi tape for the crafty folks, and stock exciting new school supplies every August and September. Let someone else spend their days ordering seafood towers at the forefront of finance and technology… I’ll just be here, becoming my grandma, chuckling at my little cards.

One thing that’s been slow to arrive in New Canaan that our surrounding towns do well: carbs people stand in line for. There’s Rise Doughnuts in Wilton, Flour Water Salt in Darien, Raphaël’s in Greenwich, and apparently, some secret pizza guy in Westport. Whither the delay, New Canaan? We’ve got the appetite. We’ve got some space. We just need a little capital for a commercial kitchen buildout and someone willing to get up at 3 AM to do the baking.

Bialys? Scones? A really, really good baguette? Simple sheet cakes for kids’ birthdays? Perhaps the bakery New Canaan needs most is one versatile enough to do any of the above, like 60-year-old Ritz Pastry Shop which closed its doors in 2005. Let’s revive it, and stop crossing town lines for our gluten fix. 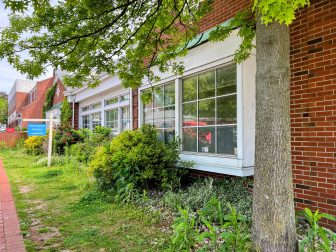 And this part could be a little strip of outdoor dining.

“They used to know your drink order and bring it to you as soon as you sat down,” said my neighbor of a now-defunct New Canaan restaurant. And that’s what I propose for this charming, bay-windowed building: our own personal Cheers, where, in the tradition of beloved Elm Street restaurant Izzy’s Place that closed in 1976, you’re as likely to find a mail carrier holding court at the bar as you are a selectman.

In this era of agonizing demographic segmentation (places are always earmarked as “for people with kids” “for bros” or “for cougars”) it’d be nice to create a place for everybody. An interior buildout here could include an idyllic New Canaan in the 60’s vibe, with whitewashed brick walls, ferns everywhere, and perhaps a vintage bicycle or two hanging from the ceiling. Kids could order a Grape Crush if children are even still allowed to consume such delicious, sugary poison (maybe a blueberry seltzer?) and color on butcher paper with crayons while their parents could eat unprepossessing dinners of spareribs with coleslaw, an exceptional fried chicken sandwich, and maybe a really good German potato salad. The bartender would know how you take your martini (Hendricks, with a twist) and send it sliding down the bar your way. This being Fantasy New Canaan Commercial Real Estate™ and not subject to the normal laws of physics, you’d catch the martini without sloshing gin all over your clothes and catch up with the Frasier type to your left. Maybe he’s in a bowling league at Canaan Lanes.

Easy, right?
Thanks for playing along.

N.B.: I’ve been informed that some of the spaces above are soon to have new businesses occupying them, and I look forward to dropping by for a visit.

17 thoughts on “Who Knew: Fantasy New Canaan Commercial Real Estate™ Is a Game We All Can Play”