Saying he’s “overwhelmed” by the community support for his original decision to remove a brittle Norway maple from the front of Town Hall and replace it with sugar maples on either side of the main walkway up to the renovated building, New Canaan Tree Warden Bruce Pauley on Tuesday afternoon re-posted the tree for removal. 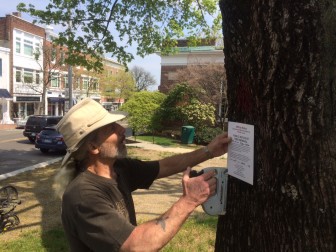 Tree Warden Bruce Pauley re-posts the Norway maple tree out front of Town Hall on May 5, 2015. Pauley had posted the tree for removal last month, but opted to pull down the post after a resident complained. After, dozens of residents expressed support for his initial decision, so now it’s being reposted. It isn’t clear whether the opposing resident or residents will push for a hearing on it. They have 10 days to do so. Credit: Michael Dinan

When news spread that a resident’s complaint had prompted Pauley to “un-post” the non-native tree—in other words, leave it be, instead of planting what he called the “quintessential New England tree” instead—locals in comment threads on New Canaanite and on Facebook voiced support for the tree warden.

At first, Pauley said, he was surprised by the response, “but the more I thought about it, the less surprised I am, because I know how strongly people feel about trees in New Canaan.”

“And I am happy for that,” said the tree warden, a fourth-generation New Canaanite and 1964 NCHS graduate. “But I was overwhelmed with the amount of support that I saw. Secondly, it was very gratifying to see people who I have worked for over the years and to hear their comments. It’s just really a nice feeling all around. I didn’t get one negative response.” 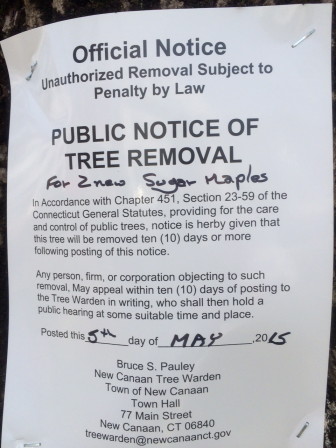 The posting on the Norway maple in front of Town Hall, on May 5, 2015. Credit: Michael Dinan

Now that Pauley has re-posted the tree for removal, residents have 10 days to request a hearing on it. There, Pauley said, he would give the floor to whomever wanted to argue in favor of keeping the tree, as well as others, and make a decision on its future within two days.

The resident who said she wanted the tree to remain, Andrea Sandor, could not immediately be reached for comment.

She had objected to Pauley and other officials via email, calling the Norway maple “an important,” visible and “legacy tree” that had been poorly pruned and “provides an anchor for the rural nature of the town.”

For Pauley, the tree is simply not the right one for New Canaan and especially for such an important, conspicuous place as the front lawn of the newly renovated and expanded Town Hall.

“It has no real redeeming qualities other than, like any tree, it can be pretty, particularly when viewed from a correct distance,” Pauley said as he posted it for removal. “But they are a very brittle tree, branches will break off in storms, they are very shallow-rooted trees, so with a full head of leaves and if the ground were saturated and we had heavy winds, they are ones that will uproot. This is not a great place for that.”

In fact, a “twin” Norway maple that had stood opposite the walkway up to Town Hall had to be removed because it developed girdling roots, Pauley said. Norway maples additionally are not especially long-lived trees at about 60 to 80 years—whereas sugar maples in New Canaan have lived as long as what Pauley estimates to be 300 years (one up on Oenoke Ridge just south of Parade Hill Road).

Pauley said he’s secured an excellent price on the two sugar maples he’d like to plant in front of Town Hall, and that the nursery from which New Canaan is to acquire them has agreed to hold the trees.