Christa Carr recalls the tremendous anticipation that surrounded the opening to the public of the Glass House in 2006. 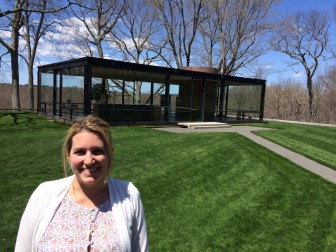 Handed over to the National Trust for Historic Preservation 20 years prior, it opened to tourists following the passing of its world-renowned architect and occupant, Philip Johnson, in 1985, and those tours essentially “sold out for the first two years,” said Carr, communications director for the Glass House.

“Everybody knew Philip Johnson,” she recalled on a recent afternoon in downtown New Canaan, at a coffee shop around the corner from the Visitor Center and Design Store downtown, where buses depart 12 times per day on weekdays for the 47-acre Ponus Ridge property. “It was a real treat to be invited to Philip Johnson’s house when he was alive.”

And it’s a treat to go now, though to this point, the overwhelming majority of visitors are out-of-towners. In 2014, statistics from the Glass House shows, during the site’s May 1 to Nov. 30 season, 96 percent of visitors were non-New Canaanites.

It’s a data point that Carr is eager to change as the Glass House spotlights tour and private party options for residents, partners with New Canaan-based businesses and organizations, bolsters its popular Community Day offerings and recasts parts of the site visit experience to appeal to an even greater degree to locals.

Asked how important it is to have New Canaanites taking advantage of the Glass House—the property, house itself and several outbuildings—Carr said: “It is integral.”

“Because we are part of the community here and we want to support the community as much as the community supports us,” she said. “It’s a give-and-take relationship and we really would like the locals to feel pride in the history—it is all of our history. This town has a lot of strong Modernist history and it brought a lot of talent.”

And Philip Johnson, a titan in the field of architecture in the 20th Century, stands at the top of that list.

Born in Cleveland in 1906, he would graduate from the Harvard Graduate School of Design in 1943 and go on to design some of the nation’s great architectural landmarks. Most notable among those was the Glass House, his own private residence on which he broke ground in 1948 and completed the following year. (See more on Philip Johnson and the Glass House here, in an original video from the National Trust.)

On Wednesday, in the Glass House’s third annual Community Day, scores of New Canaanites will visit the Ponus Ridge site for free after registering in advance (all the tickets went very quickly, Carr said, and another one will be scheduled for October).

Community Day is sponsored by Bankwell, whose senior vice president and director of marketing, Diane Knetzger, told New Canaanite that “an important part of Bankwell’s mission is to give back to the communities we serve.”

“Since Community Day creates an opportunity for local residents to visit the site free of charge, we’re able to help the Glass House provide this exceptional ‘hometown yet nationally renowned’ experience to the local community,” Knetzger said.

Carr noted that the Glass House additionally is a point of pride for New Canaanites such as herself (she’s a local mom whose kids go to East School) because it’s the only National Trust for Historic Preservation Site for about 30 miles, with Lyndhurst and Kykuit, the Rockefeller estate in the Hudson River valley.

That’s something that appeals to New Canaanite Tucker Murphy, executive director of the Chamber of Commerce, as both a resident and taxpayer.

“I am so proud to have that kind of a destination for people to come to,” she said. “As residents, I think we should just be so thrilled that a national treasure lives right here in New Canaan.”

Murphy said one of the reasons she finds herself going back to the Glass House for tours and special events is to experience the landscaped property in different seasons.

“That property is so exquisite, in the fall, and you see it in the spring and summer,” she said. “And they do change up the exhibitions and they are really top-of-the-line exhibitions.”

Carr recently joined the chamber’s board, and Murphy said she’s “really glad that now Christa is on the board.”

“We have had a longtime effort in trying to get them more involved and now we really do,” Murphy said.

At one time, New Canaan boasted some 106 Modern houses and now has 91, Carr said.

“The architects loved this town,” she said. It had been affordable to them and “it was a very special moment in time, in American history” where those who designed buildings were taking up an approach of “form follows function.”

“They thought: “Why not make it look like what it is supposed to do?’ ” Carr said.