Known to generations of New Canaanites as the elegant host site of weddings, banquets and fundraisers, Waveny House also has largely untapped areas that could serve new uses, officials say. 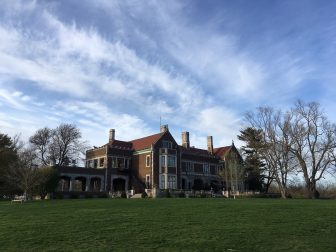 Recreation and public works officials have done a “phenomenal job” of clearing the 17,000-square-foot attic of post-prom props and other items that have collected there for years, according to Bill Holmes, a member of the Town Building Evaluation and Use Committee.

“When we go up there, you literally just salivate,” Holmes said during the committee’s April 10 meeting, held at Town Hall. “The space is beautiful. There are skylights.”

Part of a two-person team studying the 1912-built town-owned building, together with committee co-chair Penny Young, Holmes added: “The notes we are making as we went through the basement, there are so many rooms with beautiful natural light from all the wells and depressions outside. A lot of it looks like abandoned workrooms, or just general storage of things that certainly could be a very attractive usage for some group. The same thing with the billiard room and the [other] rooms on the first floor.”

The committee is charged with evaluating the physical condition and future capital needs of 44-plus town-owned buildings in New Canaan. A report that includes suggested uses for the structures—or recommendations that they be offloaded from the town’s substantial capital must-do list—is to be delivered in September. In addition to Holmes and Young, committee members include co-chair Amy Murphy Carroll, Ben Bilus, Neil Budnick, Christa Kenin and Marty Skrelunas.

Carroll said one way to evaluate Waveny may be to break it down by floors—the basement, first or ground-level floor, second floor that houses the Recreation Department’s offices, and attic—and to lay out in terms of square footage percentages how much currently is used and for what versus potential future uses.

“Aside from moderate storage for post-prom and trash barrels from the Family Fourth, the basement and attic are completely unused currently,” Holmes said. “The apartment is now vacant, the rooms on the second floor are maintained to a degree for historical accuracy, and they are available for meetings.”