The Zoning Board of Appeals recently approved a variance paving the way for improvements to a single-family home located at 7 Brinkerhoff Ave. 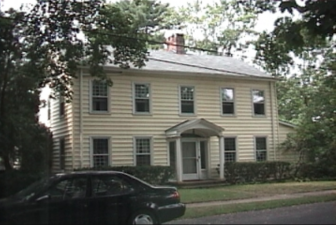 Mario Lopez of ML Builders, on behalf of homeowner Ed Ku, presented plans for improvements to the circa-1918 home during the ZBA’s most recent meeting on Nov. 6.

Ku plans to change the pitch of the home’s roof from 7 feet to 14 feet and add a 56 sq. ft. (8 ft. x 7 ft.) dormer to the attic in order to put a bedroom and bathroom on the home’s third floor, which is allowable under the regulations provided that less than half of the third floor is “finished” for non-attic use.

The proposed changes would raise the height of the roof from the current 24 feet six inches to 27 feet four inches, which is within the allowable maximum height, Lopez said.

Lopez said Ku also plans to remove an existing wrap-around deck on the side and rear of the house, thus reducing coverage on the lot by 500 square feet.

Lopez explained that the hardship for requesting the variance was that, in order to raise the height of roof, relief was needed because the house is non-conforming, mainly because it encroaches deeply into the front yard setback. This, he said, was a pre-existing condition that predates the town’s zoning regulations.

Initially, ZBA member Angelo Ziotas seemed to be leaning toward denying the request, saying that the applicant had failed too provide a valid hardship. Because the house is already non-conforming is not, in and of itself, a hardship, he said.

Board member Ben Bilus pointed out that by raising the roof and adding the dormer, the applicant would, in fact, be making the property less conforming. He acknowledged, however, that the applicant was also, at the same time, reducing lot coverage by removing wrap-around deck.

The ZBA members ultimately decided that although raising the roof would make the property less conforming, the removal of the porch would make it more conforming, creating a wash.

Perhaps more importantly, they acknowledged that in order to bring the property fully into conformance, the house would have to be relocated on the property, which is not reasonable to ask of the applicant.

“It’s an older house on an older street—and where it is set on the property is the hardship,” said board member Jeanne Rozel.

“I love this [plan],” Rozel told Lopez. “I love this street. And I’m thrilled that you’re keeping an old house. I think it’s in keeping with an old street.”

Kevin Leitao, the “most direct neighbor” at 15 Brinkerhoff, attended the meeting to express support for the plan.

“Me and my wife and I could not be happier with this development,” Leitao said. “On the other side of our house … there is a [new] house that is way too big for the lot … with a four foot berm added right on the property line. We could not be happier that, on this side, we are not demolishing a house.”

“This is the house that was built before the street was laid out,” Leitao said, adding that Brinkerhoff Ave. was a part of “the first planned subdivision in New Canaan – and this house predates all of that.”

“The house is tired and it really needs an upgrade,” he said. “[Its preservation] will be great for the town – it’s great to preserve the original character of the old streets.”

“And the lot is not that great,” he added. “It is a hardship that the house is too close to the street.”

Following a short discussion, the ZBA unanimously approved the application.

In other actions, the ZBA granted a setback variance for a residence at 131 Brookwood Lane.

As explained by attorney Michael Murray of Ivey, Barnum & O’Mara, LLC, representing property owners Spencer Browning Grimes and Lindsay Burn, the request stems from a dispute with the applicant’s neighbors at 155 Brookwood Lane over the positioning of a side yard property line which resulted in litigation. The case, he said, is now two years old but is very near a settlement. The settlement, he said, involves making a slight adjustment to the rear property line, thus resulting in the conveyance of a small sliver of land (about 812 sq. ft.) to Grimes’ and Burn’s neighbor, Donald DeFossett.

Grimes and Burn, he explained, were requesting a variance to allow for a reduction of the side yard setback from 35 feet to 26.1 feet, in order to allow their pool equipment and generator to remain in the current locations on the property.

“We’re here out of necessity,” Murray told the board. He said the hardship involved is the “awkwardly shaped lot” and the inability to relocate the pool equipment and a generator, which are located behind Grimes’ pool house.

“By adjusting the allowable setback, they can move forward with adjusting the property line,” Murray said, later adding, “We’re looking to make this problem go away.”

Ziotas called it an “interesting” application and noted that the ZBA does not see requests made in order to resolve property line disputes very often.

The ZBA members ultimately agreed that in granting the variance, they would be “reducing [the possibility of] future non-conforming conflicts” for the property.

The board unanimously granted the request for variance contingent on the lot line being moved.

The ZBA also granted a variance allowing for an addition and improvements to a home at 22 Down River Road.

Maria and Nicola Caruso are proposing to build an addition to their existing non-conforming split level colonial. Maria Caruso, presenting the plans before the board, said following completion of the improvements the home would have three floors of living space including the basement, which counts as a livable floor since it is above ground on two sides of the house (the property, she explained, is sloped).

Caruso explained that they are not expanding the footprint of the house, mainly because they are restricted by wetlands to the rear of the property, which abuts the Five Mile River. Rather, they are “building up” so as to expand the amount of livable area. They requested a variance to allow relief of maximum yard setbacks for principle structures exceeding the maximum number of allowable stories on a property in the Residential A zone.

As explained by Caruso – and also showing in the plans submitted – the first and second floor of the home would remain the same size at about 1,082 sq. ft. and 1,042 sq. ft., respectively, but a “third floor” addition over the garage would add about 826 sq. ft. and raise the overall height of the home.

Neighbor Michael Stayman of 36 Down River Road, who attended the meeting, expressed support for the application.

“I don’t have any specific comments other than say that we are in favor of this application,” he said.

Following a brief discussion, the board approved the request unanimously.