Town officials Monday night granted the owners of a Colonial on South Avenue a variance to build an addition above their garage. 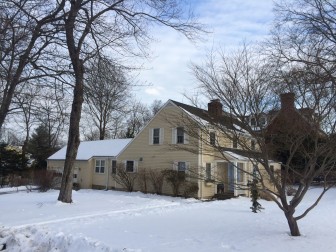 344 South Ave. is on the corner of Hawthorne Road. Credit: Michael Dinan

When the 1953 home at 344 South Ave. sat in the A Residence Zone, its front yard setback was 30 feet—now that figure is 35 feet in the 1/3-acre zone, officials say—a change that makes the structure legally non-conforming.

Owner Gregory Carlon told the Zoning Board of Appeals at its regular meeting that the garage itself—and by extension, proposed addition above it—are over the setback boundary by very little.

“We are doing renovation of our house and we are not tearing the house down, we are just trying to add two bedrooms upstairs and we seem to be over by a few inches,” Carlon said at the meeting, held in the Sturgess Room at the New Canaan Nature Center. ZBA Secretary Jeanne Rozel ran the meeting in absence of the board’s regular chairman. 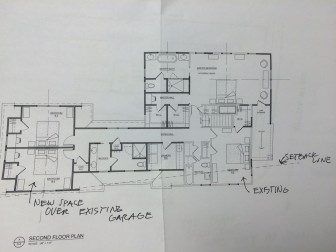 The dotted line here shows the setback line. The existing house on the lot—originally zoned for A Residence but now 1/3-acre—is legally nonconforming (see note on lower-right of rendering above), and the garage is a few inches over the setback line, meaning the addition to be built directly on top of it also will be over the line. Rendering by PB Architects of Darien

The ZBA voted 5-0 in favor of granting the variance, citing the hardship of the structure’s siting on the property that forces an existing encroachment.

They asked architect Jacek Bigosinski of Darien-based PB Architects about the elevation of the addition relative to the house and existing roofline, whether the addition would have a dormer on the side (yes), material of roof (fiberglass) and side of the house (shakes), size of the lot (.36 acres, nearly 16,000 square feet) and whether any other work was going on in the back of the house (yes, on the patio).

The addition will include two bedrooms and bring up to the height of the rest of the house the roofline of the area over the garage (now used for storage), Bigosinski said.

The existing roofline will remain and the peak over the garage matches the existing house and is not higher, he said.

ZBA members John Kriz and John Mahoney urged the applicant to get a surveyor out and make sure that, as the project gets underway, the encroachment into the front yard setback is not exacerbated with the new building.

“Sometimes when buildings are reconstructed, the measurements go off when it’s being constructed, and what is built is nonconforming with what our variance has given,” Kriz said. “That’s probably not a good thing to do and I believe the folks in Town Hall will come out and make sure while it’s still being framed that the dimensions are conforming. That may be something to consider.”