On a chilly, brisk evening it took the New Canaan boys lacrosse team a while to get warmed up.

Once they got hot, there was no stopping the Rams. 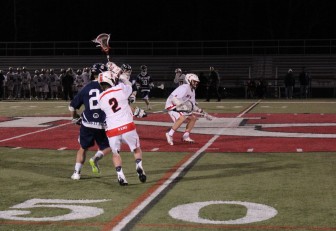 “I thought our shooting was better in the second, third and fourth quarter – especially the second and third,” New Canaan head coach Chip Buzzeo told NewCanaanite.com. “We started moving the ball. First quarter we didn’t move the ball. We had one possession where we moved the ball well. The other possessions we were just dodging to cage and trying to score. Our team doesn’t generate goals that way. So we kind of got away from what we do well, then we started doing what we’re supposed to be doing and it worked.”

New Canaan trailed 1-0 as a little over four minutes into the contest Wilton attackman Harrison Koch took a pass from Michael Lynch, and fired it past New Canaan goaltender Drew Morris for an early Warriors lead. Meichner kicked off the scoring for New Canaan when he falshed out from behind the net and ripped a shot past Wilton goalkeeper Matt Brody’s right shoulder to knot the score at 1-1.

The rest of the first half was a battle for New Canaan. 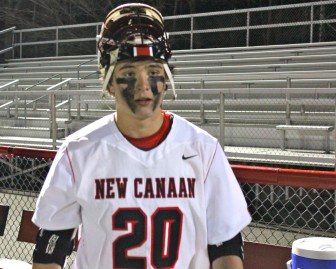 The Rams notched one more goal in the first when junior Kyle Smith took a pass from senior co-captain Michael Kraus and whipped his shot into the top left corner from 10 yards out.

New Canaan’s play picked up in the second. The Rams controlled possession for the majority of the first five minutes of the period, firing two shots on goal that Brody saved and a couple more that narrowly missed during that span.

Later in the period, attackman Clayton Burt got in the scorebook with another great feed from Kraus as Burt shot one over Brody’s right shoulder for a 3-1 lead. Less than 30 seconds later midfielder Owen Toland made it 4-1 by bouncing a shot through Brody’s legs. With a little over two minutes left, Ryan O’Connell added a tally to give the Rams a 5-1 lead, which they would take into halftime.

New Canaan came out strong after the intermission, and eventually the game wide open. Meichner got his second goal of the game a little over one minute into the half after David Strupp found him off a clearing attempt. Meichner wrapped around the net, made a juke move, and fired it past Brody for a 6-1 lead. 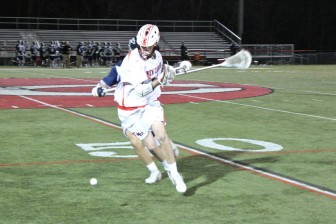 Wilton had no answers for the New Canaan’s offense as the next five Rams shots also found the back of the net, increasing the Rams’ lead to 11-1. Wilton finally stopped the bleeding with a goal with just over three minutes left in the third, and added another goal just before the end of the period to make it 11-3 New Canaan heading into the fourth.

Smith and Toland added goals for the Rams in the fourth period to cap the scoring, as New Canaan improved to 4-1 overall and 3-0 in the FCIAC. With the loss, Wilton fell to 4-3 overall and 3-1 in conference play. 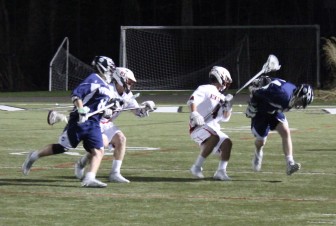 “They’re great players, they’re great leaders. Great human beings. They’ve got an inner drive,” said Coach Buzzeo. “We started out flat and leaders are supposed to step up, and they did. This team truly follows those two and every game they come to play. So as long as they keep doing what they’re doing, I think the rest of the team will follow.”

New Canaan gets right back at it on Saturday afternoon against a strong Greenwich squad (4-2, 4-0 FCIAC) at 2:30 p.m.