Authorities last week arrested a 42-year-old man in Brooklyn in connection with the Nov. 6 robbery at a downtown New Canaan jewelry shop, and say that in total, four of the five suspects in the brazen daylight crime have been arrested and are in custody.

The fifth suspect, 28-year-old Ralik Hansen, is at large and should be considered armed and dangerous, New Canaan Police Chief Leon Krolikowski said Tuesday in a press release.

“Hansen has been federally indicted, is at large, and is wanted by the Federal Bureau of Investigation,” Krolikowski said. 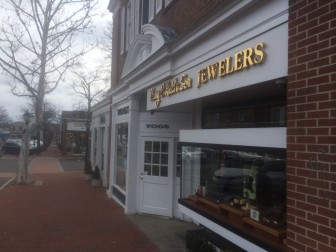 The five individuals, including Robinson, arrested April 23 in Brooklyn, are part of an 8-man crew that stole more than $1 million in merchandise across four states—Connecticut, New Jersey, New York and Virginia—from about July 1, 2013 to Jan. 30, 2014, according to information published by the U.S. Attorney’s Office, Southern District of New York.

The crew was organized and hit “high-end jewelry and watch stores located in four states,” smashing “display cases with hammers while customers and employees were in the stores,” according to a release issued by U.S. Attorney Preet Bharara of the Southern District of New York, George Venizelos, assistant director-in-charge of the New York Office of the FBI and New York City Police Commissioner William J. Bratton.

The five suspects in the New Canaan robbery (and their nicknames) are:

The three others connected with the group are:

Indictments charge them with robbery conspiracy and robberies of high-end jewelry and watch stores using violence, including firearms, and resulting in the theft of more than $1 million in watches and other goods.

The New Canaan robbery—which occurred at 4 p.m. on a Wednesday at Henry C. Reid & Son Jewelers, located in the heart of our downtown at 72 Elm St.—saw four men try to enter the store “but were stopped when they could not open the front door because an alert employee had quickly locked the door,” according to Krolikowski.

“One of the suspects shattered a front display window with a sledge hammer type tool. The suspect reached in through the broken glass and took three Rolex watches. The approximate value of the watches is $55,000.”

They ran on foot and ultimately fled in a Chevy Malibu. Police used blood and skin tissue at the scene of the crime to help identify the robbers and made their first arrest last month.

“The success of this investigation is the direct result of the hard work and dedication of the members of the New Canaan Police Department’s Investigative Section and Patrol Division, the Connecticut State Forensic Laboratory as well as the FBI and local law enforcement agencies in the tri-state area,” Krolikowski said.

Here’s the wanted poster on Hansen: 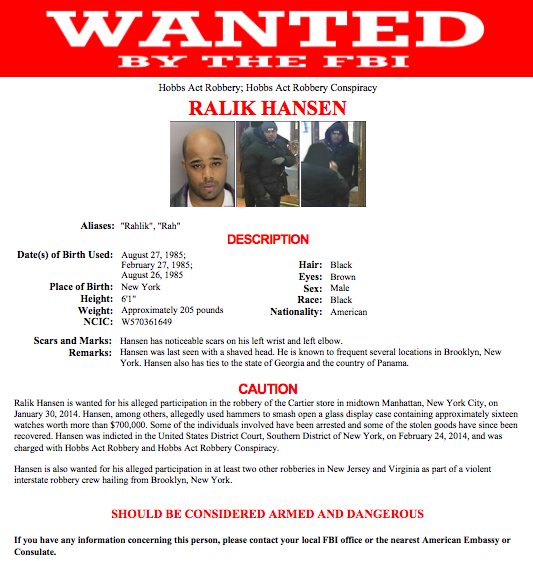