Though the donors and volunteers who gave time, money and energy to the partially completed fields projects at New Canaan High School deserve sincere thanks, the town also saw failures on multiple levels that led to undisclosed cost overruns, the chairman of the Audit Committee said Wednesday night. 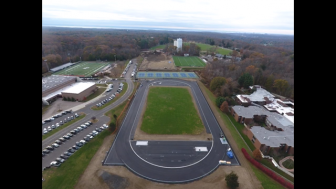 The new track at New Canaan High School coming together in November 2017. Photo courtesy of the Athletic Department

There were “adequate controls in place which should have helped avoid the issues and surprises that we had,” Bill Parrett told members of the Town Council during their regular meeting.

“This is really important to understand, because if there were not adequate controls, we would have had material weaknesses from an accounting standpoint and having material weaknesses from an accounting standpoint would be very difficult to rectify in a short period. It looks to us that the issues are more about bad management—possibly waste—versus poor controls. There was a failure of town leadership, department leadership, boards, committees and councils, in our judgment.” 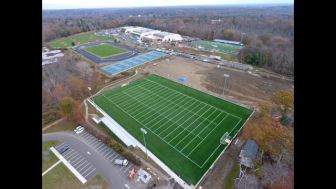 He spoke during an update for the Council on the Audit Committee’s review of how the projects at NCHS—rebuilding of a turf field, creation of two more and total overhaul of the track—came to cost New Canaan an estimated $800,000 more than originally thought. The overruns had become known to a committee steering the projects in June, but were not disclosed to town funding bodies until September.

A final report from the Audit Committee is expected in about two weeks, Parrett said.

The committee has found that “many people who touched project should have and could have asked different questions.”

“We believe that if those questions were asked, the result would have been different,” he said. “Even the overrun approval that the recent Town Council made was based on hyperbole—it was not a sound business process for a multimillion-dollar project.”

For example, Parrett said, a professional liability requirement was “lined out” of corporate contract with Rockland, Mass.-based R.A.D. Sports, a major contractor, even though New Canaan’s legal counsel required proof of insurance.

Town officials “indicated that this insurance is required only when applied to design contracts but not performance contract, and to us it seemed like something we need to dig into a little bit more in the next couple weeks to better understand when insurance is required and aligns with legal counsel for the town,” Parrett said.

The Audit Committee also is concerned about the concept of an “enterprise zone,” in which the new fields themselves are rented out to third parties as a revenue generator for the town.

That concept “has been discussed, but there are no plans or processes formalized or implemented,” Parrett said.

“We think that there should be a draft model agreement letter that can be modified for each specific project as new ideas come up. The town leadership can work together to tailor that design to a particular project. We think the drafting of rules governing rentals of new fields to outside parties is something that’s planned for the spring and is something either the first selectman or others need to tend to pretty quickly.”

In general, Parrett said, the town should “revisit the governance for partnerships of this nature—in terms of project ownership, management, transparency, accountability.”

“Many parties are involved including the Building Committee, selectmen, the Town Council, consultants and others and again there is really no clear role or responsibility,” he said.

Parrett added: “That got us to this particular point here so we want to make sure it doesn’t repeat itself in another public-private partnership. And then we think we should develop an outline of the public-private partnership lifecycle, from the original conception of projects to the design of projects to the building of projects and it’s really important how that is going to run after a project becomes operational, who is going to share in the economic benefits of that project.”

Parrett said members of the Audit Committee asked themselves how something that seemed so simple as the fields projects at NCHS could go so wrong.

“It seems to us that the first selectman’s office is not organized in a way to provide information to Councils and other bodies of the town in order to ensure that there are good processes,” he said. “The other thing is it seems to us that many bodies like the Council do not have the necessary support or assistance to help them understand projects of this nature and how these projects are designed, developed and executed.”

In other business during a special meeting before the regular one, the newly configured Town Council voted in an entirely new slate of officers. John Engel was elected chairman, while Sven Englund and Rich Townsend each will serve as vice chairmen, and the Council will do away for now with the position of secretary.