New Canaan should pause before approving a plan that would see a formal garden at Waveny house changed from its original design, according to local landscape architects. 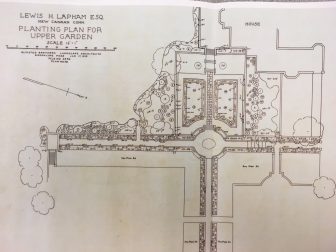 The Olmsted Brothers firm original plan for the parterre garden at Waveny.

Located directly east of the balcony out back of the 1912-built Waveny house, the parterre garden is “the most important formal garden in town,” an “historically significant” area that “deserves a great deal of thought before it gets radically changed,” Keith Simpson told members of the Parks & Recreation Commission at their most recent meeting.

“That configuration of the boxwood hedge has been there for over 100 years and I think it has stood the test of time,” Simpson said at the Nov. 8 meeting, held at Lapham Community Center. “And also, the Olmsted office is probably the best known firm in the history of landscape architecture in the country. And I have worked on a lot of restoration of properties, historic properties and I have always … strived to restore the work of the former great landscape architects. And it really seems to me that this particular garden at this particular time should be taking into account much more of the historic shape of it.” 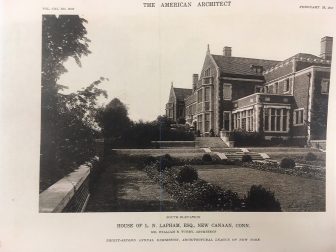 A February 1917 photo of the parterre garden at Waveny.

The founder of an eponymous landscape architecture firm in town, Simpson referred in his comments to a plan presented last month by the New Canaan Garden Club to update the parterre garden by re-planting it and adding benches for park users to enjoy.

Several board members of the Waveny Park Conservancy attended the meeting, including Chairman Bob Seelert, Treasurer Susan Rein, Caroline Garrity and Chris Schipper. Simpson himself is a board member of the nonprofit organization—whose mission is, “Working in partnership with the town of New Canaan, to ensure that Waveny Park thrives in perpetuity and continues to inspire and serve the people of New Canaan forever”—and Parks & Rec Commission Chair Sally Campbell is an ex officio board member. 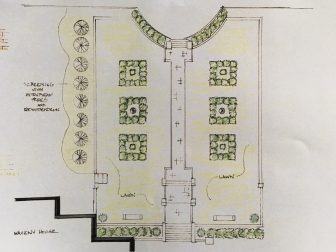 Garrity identified herself as both a Conservancy board member as well as past president of the Garden Club.

The new design, she said, “is based on historical and traditional form of boxwood hedges that originated in England, Italy and France in the beginning of the 15th and 16th centuries.”

“But our design represents ad fresh take on this historic and traditional form in the garden. The Garden Club’s goal was to renovate and renew the parterre garden, not restore it. Because Waveny is no longer a private residence but a public park enjoyed by many, we made the design more inviting and open, as well as deer-proof and low-maintenance. The Garden Club is excited and proud to present this plan, and our driving motivation was to work in conjunction with the Waveny Park Conservancy to make sure the park continues to thrive in perpetuity. We believe this is a strong plan and speaks directly to the greater property as you stroll the parterre garden, down to the walled garden and down to the pond. New Canaan Garden Club has partnered with the town of New Canaan since we were founded in 1909.” 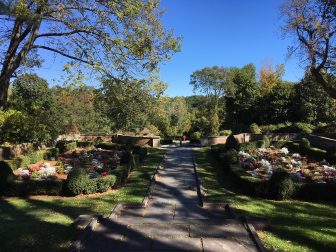 Ultimately, the commission—an advisory body—put off a formal vote on the Garden Club’s plan, pending the ironing out of some details regarding the project’s budget (more on that below). It is to be paid for with private funds and maintained by the town at no more cost than the parterre garden currently requires.

Even so, Campbell made it clear that she supported the Garden Club’s efforts, saying the division between Simpson and the Club may have been a problem of communication. Campbell and Simpson during the meeting had sometimes-testy exchanges. (Those other Conservancy board members appeared to support the Garden Club’s plan, as they arrived at and left the meeting as a group.) 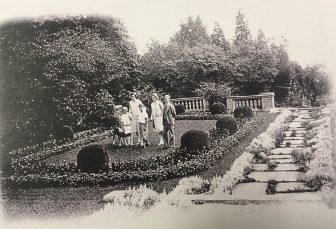 Laphams in the parterre garden at Waveny.0

She said the Conservancy members had looked at the Club’s plan “with no objection” and when Simpson started to speak on that matter, changed her assertion to: “I said they have reviewed it. They have reviewed the plan.”

When Simpson after addressing the commission moved to hand out copies of the original Olmsted Brothers plans for the parterre garden, Campbell began to object.

“Excuse me, madam chairman,” he said. “I am not presenting my plan.”

Simpson said that New Canaan now is “being watched by the National Association for Olmsted Parks.”

“They are taking a great deal of interest in what we are doing and this is a true radical transformation of an important garden in the park,” he said.

Campbell replied: “OK. We appreciate your insight on that.”

The association to which Simpson referred describes its concern as “the legacy of landscape work left by Frederick Law Olmsted Sr. and the firm continued by his sons.”

Simpson’s associate at his own firm, Bill Pollack, described the Olmsted Brothers company as the original Olmsted’s “immediate successor firm.”

Garrity said that the Garden Club waited three years to receive a plan for the parterre garden from Simpson but that he didn’t present one until after the Club itself brought forward its own plan last month.

When Simpson tried to respond, Campbell stopped him.

“So you are cutting me off,” he said.

Campbell answered: “No, you had two minutes [to speak.]”

Simpson replied: “I understand. You don’t want me to speak.”

Yet he did get more chances to address the commission. The agenda item appeared to have been wrapped up, and the Conservancy members—except for Simpson, who had to stay for a second, separate matter before the commission—moved out of the Douglas Room and into the Lapham lobby.

Simpson told commissioners that his plan was delayed because “it was a moving target,” with open questions about whether or not the walls around the garden would be reconstructed and whether the Club itself would participate in that, as well as other questions regarding the paths, paving and curbing. It also wasn’t known for a time just how the Waveny house roof replacement project might displace those doing work in its immediate vicinity, he said.

The Conservancy board members re-entered the room—by this time, the commissioners were munching on freshly picked, local apples that had been distributed by Schipper—and Campbell said that she feared “we are going to get into a he-said, she said.”

She told Simpson that the items he cited “should not have been involved in the delay in doing a plan, the [parterre] garden plan.”

Campbell said she would take responsibility for any miscommunication with Simpson.

“I felt buttoned up,” she said. “I am sorry that maybe Keith misunderstood things and I cannot change that. I think what we have from the Garden Club is a wonderful plan. We have the Waveny Park Conservancy who reviewed it and has money for it, the Garden Club is putting $20,000 toward it. And we have something that certainly will enhance Waveny come April when it is planted and done. That is all I can say. I apologize, Keith, if you were not aware of the urgency and timetable we had, but I think it was very clear.”

Garden Club member Jane Gamber, a past president, said there was no communication problem.

“It was Keith who had said to us that we were on our own” after nearly three years without producing a plan, that “he was not going to be able to work on this project any longer,” she said.

Campbell said the budget supplied by the Garden Club for its proposed project requires more detail, and that the town’s parks superintendent must approve of what is planned with respect to irrigation work.

To Simpson and the Club, Commissioner Francesca Segalas said: “I love that both of you are so interested in bringing beauty and longevity to the garden, that is great.”

During the meeting, commissioners asked how long the project would take (plan to finish it by May), how long it will take to complete (start it in April), whether there are plans to reuse the boxwoods in place now (yes) and whether “snow dump” would be a problem (the club is looking at a variety of boxwood that fares better in winter).

The Parks & Recreation Commission is scheduled to meet next on Dec. 6. The parterre garden plan must be approved by the Boards of Selectmen and Finance as well as the Town Council.

4 thoughts on “Garden Club, Landscape Architect at Odds Over Future of ‘Parterre Garden’ at Waveny”