Perhaps the most important step taken by the last family to own privately what is today known as Waveny Park was in hiring the renowned Olmsted Brothers landscape architecture firm to design its grounds and gardens, a local expert said Wednesday. 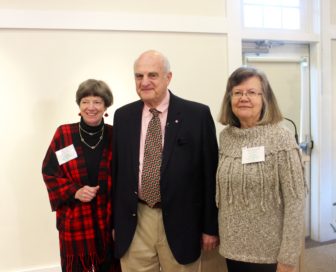 Led by the Brooklyn-born founder of Texaco Oil Company, the Lapham family not only built Waveny House but oversaw creation of the carefully cultivated area immediately around it, including the walled garden, according to Keith Simpson, a New Canaan-based landscape architect.

Yet since New Canaan acquired the property in 1967, its main house, outbuildings and grounds all have needed regular repair and upkeep, such as when Simpson and the Garden Club restored the walled garden east of the prominent brick structure in 1982.

“But it’s only a small area,” Simpson told more than 100 listeners gathered in the Visitors Center at the New Canaan Nature Center for an hour-long talk on the cherished public park. “More places need attention. What can we do to tackle the rest?”

As a member of the Waveny Park Conservancy — a private group working in a partnership with the town of New Canaan — and the New Canaan Beautification League, Simpson is part of the solution. 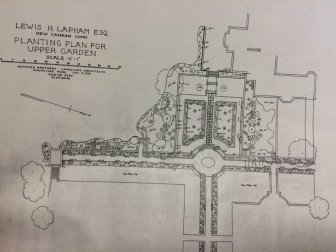 Restoring the gardens is one of five major programs outlined by the WPC in the past year. The others include restoration of the pond, improving the entryway to Waveny from South Avenue to the main house, a forest management study that will serve as a foundation for future woodlands, trails and open space restoring the cornfields.

At Wednesday’s presentation, Simpson explained how the history of the park brought the Conservancy to develop its current plans. He displayed photos taken by the Lapham family — held today by the New Canaan Historical Society —that have been instrumental in the Conservancy’s development of a plan for restoring Waveny Park. The last family to operate Waveny as a farm did more than change the physical landscape. The Laphams gave Waveny its name, after England’s ‘River Waveney,’ Simpson noted. The Laphams also created a polo field, which in 1928 became a field for landing airplanes. Memorably, Jack Lapham once landed on the field after a lengthy flight from Dallas, Simpson told listeners.

In the 1930’s, the Laphams lost acreage when the 300-foot-wide Merritt Parkway was built, Simpson said. The estate eventually was taken over by the daughter of Lewis H. Lapham, Ruth Lapham Lloyd, who generously would go on to transfer the property to New Canaan in 1967. Simpson described New Canaan’s ownership at that time as a positive for the town but added that it was not immediately a “slam dunk” success in terms of making New Canaanites happy. It did, however, raise the question: Will New Canaan always have open space?

Faith Kerchoff thanks Keith Simpson for his presentation of the history and next steps in the restoration of Waveny Park. Credit: Kim Devine

Since the town acquired Waveny, New Canaan has retained the singularly large parcel as open space, though it’s been double-sided: Simpson described maintenence for such a large amount of land as “a struggle.” Comparing photos of the privately owned farm’s luscious cornfields with current images of the park, Simpson summarized the Conservancy’s goal: “Make Waveny fit the new need.” Smaller restoration projects have already seen success —the Conservancy funded a new trail opposite the “Orchard” softball field that received high praise from runners and park-goers this summer.

Simpson said that the park and its buildings provide New Canaan with the unique ability to host picnics, post-prom, concerts, the Family Fourth, cross country running and weddings in the same place. He also underscored the difference a change such as adding a layer of shrubs to a trail can make, saying each change is destined to give park-goers a “full rich experience.”