Officials on Wednesday approved the hiring of a longtime Planning & Zoning director in Bethel and, since in April, in Westport, to fill the recently vacated position of town planner for New Canaan. 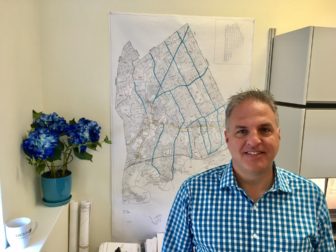 The Board of Selectmen voted unanimously in favor of hiring Steve Palmer for the job. He is scheduled to start Nov. 14.

During an interview at his Westport office, Palmer said he was “very excited to begin” working in town.

“I think that based on my experience working in Bethel for many years—it’s a smaller community, really the same size in terms of land area, population and downtown dynamic, I think that they’re very similar—I think it’s a great fit for me,” he told NewCanaanite.com. “I’m used to working in a community where I can be hands-on with the public and participate more directly in the decision-making process and I think I could add a lot of value to the Planning & Zoning Commission and planning in general, in New Canaan.”

He outpaced a field of 21 original applicants for the position long held by Steve Kleppin, eventually narrowed to three finalists, in terms of “qualities, expertise, knowledge and personality,” according to New Canaan Chief Building Official Brian Platz.

“He’s a great fit for the town and his co-workers,” Platz, a Bethel resident himself, said during a special meeting of the Board of Selectmen, held at Town Hall.

“I think we are lucky to have him,” Platz said.

Palmer arrives at a busy time for the New Canaan Planning & Zoning Commission. Kleppin, who has taken a full-time job as Norwalk’s town planner, is to advise the town in a consulting capacity through larger applications already underway, officials have said, such as those involving Grace Farms, Roger Sherman Inn and Merritt Village.

“I think he’ll be a great fit for New Canaan. I like his long experience both with a larger community like Westport and a smaller one like Bethel. Our opportunities and challenges range between the two which makes his background a very relevant fit. I spent a good deal of time with Steve in the interview process and I think New Canaan will find him to be highly knowledgeable, citizen friendly and focused on doing what’s best for our town.”

After graduating with his bachelor’s degree, Palmer went to Westport and worked for 12 years as a zoning enforcement officer, from 1990 to 2002, according to a copy of his resume. He then worked as head of Bethel P&Z starting in 2003, and took on that role in Westport about six months ago.

First Selectman Rob Mallozzi said of Palmer at the meeting that “everyone that knows him likes him a lot.”

“He has a great reputation out there,” Mallozzi said.

He and Selectman Beth Jones cast a 2-0 vote in favor of Palmer’s hiring. Selectman Nick Williams was unable to attend the special meeting, Mallozzi said, the he also was impressed by the new town planner.

Palmer is a member of the American Planning Association, Connecticut Association of Zoning Enforcement Officials and served on the Bethel Chamber of Commerce’s Board of Directors from 2003 to 2012.