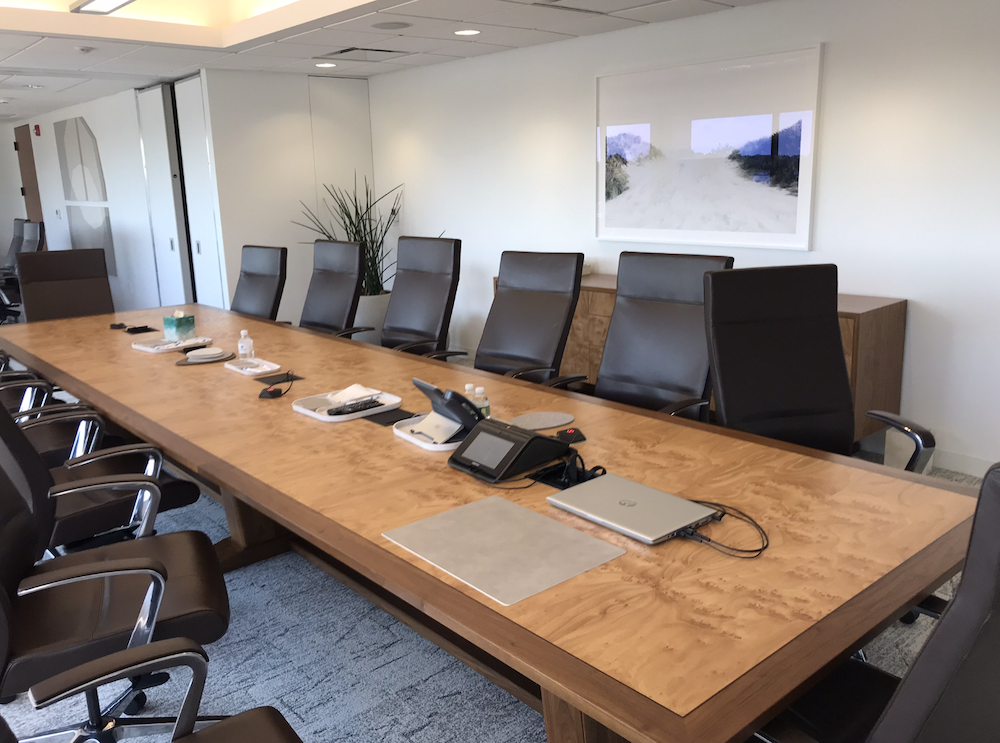 One of the conference tables hand-crafted for Bankwell by Tom Throop of Black Creek Designs in New Canaan. Credit: Michael Dinan

Laura Waitz, executive vice president and COO at Bankwell, had a vision when the company decided to move its headquarters to New Canaan two years ago. 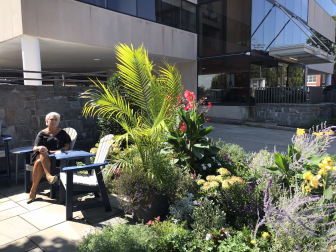 Laura Waitz of Bankwell sitting on one of the year-round outdoor chairs from New Canaan-based Against The Grain, amid a garden planted by Gregg’s Garden Center & Landscaping, also of New Canaan. Credit: Michael Dinan

The largest private employer in New Canaan at 100-plus workers is “a relationship bank,” Waitz, a New Canaan resident, said on a recent morning from the second-floor conference room of Bankwell, located at the corner of Elm and Grove Streets.

“It’s all about building relationships in business and for our employees and for the community we work in,” she said. “So when we expanded and brought so many more people to New Canaan it was about being a partner to the community, as well. And that was critically important and I wanted a workplace that was peaceful and serene and didn’t look ‘corporate banking’ but that would provide a welcoming, collaborative environment.” 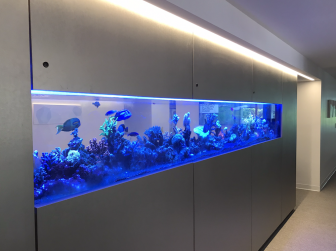 In designing it, Bankwell—which already donates to more than 200 organizations per year, with focus on children, education, food insecurity, homelessness and financial literacy—hired, contracted and otherwise worked with dozens of New Canaan businesses. The bank’s placid and functional workspace includes conference room pieces handcrafted by New Canaan’s gifted furniture designer maker, Tom Throop of Black Creek Designs, a custom-made 300-gallon aquarium from Randy Jahier of Life Aquatic on Park Street, walls lined with the work of local artist Elena McCoy and photography from CAS Gallery on Elm Street, gardens planted by Gregg’s Garden Center and Landscaping on Grove Street, with year-round outdoor furniture from Against the Grain on Main Street. On Wednesdays, Bankwell orders its employees lunch from a New Canaan-based restaurant, on a rotating basis. 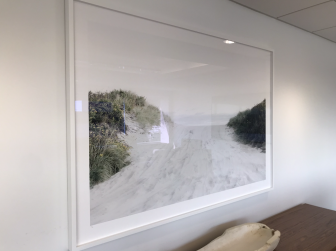 “The community has been good Bankwell and we want to be good back to them,” Waitz said.

The business and nonprofit communities have taken notice.

Laura Budd, executive director of the New Canaan Chamber of Commerce said, “While Bankwell has become a regional banking leader they continue to be committed to each individual community they serve.”

“It should come as no surprise that they made the effort to employ local vendors and contractors for their new office build-out,” Budd said. “They even went as far as working with local nonprofits—including the Chamber—to distribute some used but still in mint condition office furniture.” 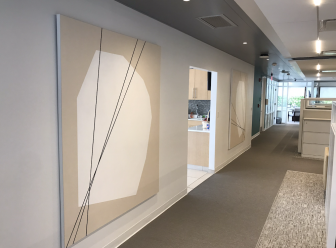 The work of local artist Elena McCoy is featured on the walls inside Bankwell’s newly renovated offices at Elm and Grove Streets. Credit: Michael Dinan

Waitz herself serves on the Board of Directors at New Canaan nonprofit Filling in the Blanks, which fights childhood hunger by providing children in need with meals on the weekends. And Bankwell partners with local organizations and sponsors scores of their local events, including the New Canaan Land Trust (Art in the Park), New Canaan Library (Literary Luncheon), LiveGirl (She Works), Ram Council and New Canaan Museum & Historical Society.

Waitz, who has a gift for interior decorating as well as landscaping, took a personal hand in every aspect of the new building’s look, feel and layout. She picked out each planting in front of the building at 258 Elm St., a varied and colorful garden that passersby constantly stop to photograph, as well as each framed photograph from Friese, whom she calls “phenomenal.” 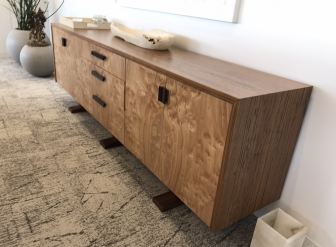 One of the credenzas hand-crafted for Bankwell by Tom Throop of Black Creek Designs in New Canaan. Credit: Michael Dinan

Waitz calls Throop “magic” in his creation of two credenzas and two conference tables from scratch.

“Literally I saw this when it was trees,” she said while sitting at one of the Black Creek Designs tables. “And I loved going down and watching him and seeing it be put together.”

“It was an honor to be able to work with them,” he said. “And they were fantastic to work with, very open in terms of the design. They pretty much said let’s see what you can do for us. They set up the parameters of the size of the tables and such. But one of the things I had wanted to do, the tables and walnut and elm burl, and one of the things I wanted to bring in when I was making the pieces and designing the pieces, was to use materials that sort of related and so being on Elm Street I thought it would be appropriate to use elm incorporated into the table. So little subtle things to tie into that. As far as the design went, the brief was to create something that was contemporary but not too contemporary and that speaks to the solidity of the bank, as it were. And I think that’s what I created.” 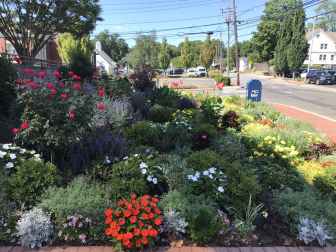 Jahier similarly said that Waitz, and Lynne Gomez, executive coordinator and assistant corporate secretary at Bankwell, were “great” to work with.

“It’s very nice to have a beautiful tank like that so close to us—if there’s ever an issue, we can walk down there in 30 seconds, so that’s always nice,” he said. “And we’re really proud of that tank. It’s state-of-the-art, a 300-gallon custom tank. We had to bring a crane in to get it hoisted through the window on the second floor. Empty, the tank empty weighs 500, 600, 700 pounds, and the stand weighs the same and it’s 12 feet long, so we weren’t going to get it up by the stairwell or elevator.” 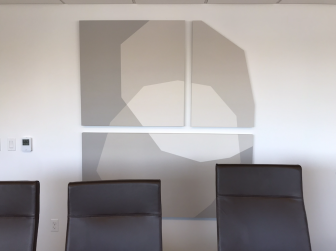 The work of local artist Elena McCoy is featured on the walls inside Bankwell’s newly renovated offices at Elm and Grove Streets. Credit: Michael Dinan

Filled with water, the tank weighs about 3,000 to 4,000 pounds, Jahier said. And everything in it is alive.

“All the corals are living, obviously all the fish, we’ve got all kinds of invertebrates in there,” he said. “They love it. Laura and Lynn name everything and everybody has a name and they treat them like family. If a snail isn’t looking good she’ll call up and say, ‘Our snail!’ We maintain it twice a week. We go there and do a major service and then a touch-up on the weekends.”

Waitz said that Jahier was involved with the tank installation from the time of the interior demo as Bankwell prepared its new company headquarters, with structural and mechanical engineers advising on the new feature.

“It’s incredible,” Waitz said of the tank. “That whole wall was built because I wanted a fish tank there. It’s also a work of art and people love that.”

One thought on “‘A Partner to the Community’: Bankwell Works with Local Businesses in Designing, Outfitting New Elm Street Headquarters”