Calling the redesign of a new home on Forest Street tasteful, respectful of the property’s historic past and exemplary for an important neighborhood, town officials last week voted unanimously to lift a delay on the demolition of an existing structure.

Members of the Historical Review Committee voted 4-0 at their Jan. 5 meeting to lift a delay instituted last month on demolishing the ca. 1830-built home at 74 Forest St. 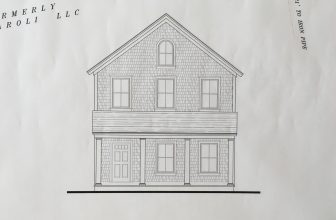 “You have made significant changes—positive changes—I think you have created a winner here, a really wonderful model for the neighborhood and an example for others who will come after you,” committee member Martin Skrelunas said during the group’s meeting, held at the New Canaan Historical Society’s Town House.

He addressed builder Tom Sturges and architect Doug MacMillan. The pair brought forward a new home design after a local preservation filed a formal objection to a plan to demolish a neglected house there. It includes re-creating a number of key architectural features of the antique house as it faces the public street, including location of a front door and windows, with a unique round window at the top, and a full front porch. The new design also gets the garage door off of the front elevation to “make the house basically look the way it was,” MacMillan said. The freeze board, rake board and head trim will be done in similar detail, he said. 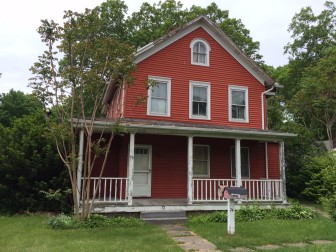 Committee member Rose Scott Long said: “I think short of keeping what is there, which was not feasible, you have really done the community a service here, and I really appreciate the efforts you guys have made on this. This will mean a lot to maintain the character of that street. It’s a great thing to be doing, thank you.”

Along with Long and Skrelunas, committee Chairman Mike Farrell and Ed Vollmer voted in favor of lifting the demolition delay. Laszlo Papp was absent.

No variances or permits are needed from the town, MacMillan said.

Committee members asked what will be the approximate square footage of the new units (1,900 to 2,000 square feet), whether they’ll be two- or three-bedroom units (three), whether there will be ground-floor bedrooms (probably not), whether coverage had actually been reduced in the new construction over the existing house (very slightly, yes) and whether the new plans showed a slightly lower pitched roof between the two units (yes).

The units that form the single two-family dwelling planned for the site “are as close to detached as you could get,” MacMillan aid.

“The common wall is really the second floor,” he said. “You very much feel like you have your own house.”

Mimi Findlay, the historic preservationist who had filed the objection, said MacMillan and Sturges “have done a great job” and said the work was “really divine.”

Farrell after the vote said “you can knock down that old building with all of its appalling history, and then move ahead for this design which we think will be so appropriate for neighborhood and also I’m pleased to see that we can make a change that carries on the historical ideas and suggest the old environment as strongly as possible.”

The demolition of number 74, as it now stands, closes the book on a home that three years ago was the subject of a blight citation, following several years of complaints from neighbors. Officials in issuing the citation found that its roof was deteriorating and no longer performing its function, that garbage and debris could be seen inside a garage when its door is open, that paint was peeling from the porch and other areas of the home’s exterior and overgrown shrubbery and an unkempt yard were visible—all from either the public way or adjoining properties.

Yet Findlay objected to its demolition pending a look at detailed plans for what was to come, calling the house’s razing “an example of the removal of so many of these small, early 19th century houses in town.”

“The town’s heritage is being eroded to the detriment of our village charm: to remain livable for all of us, we require human scale, access to light, air and open space as well as touchstones to our cultural past<” Findlay said. “These dense developments, such as on Park Street and Forest Street, are showing disregard for the public purpose of our zoning laws.”