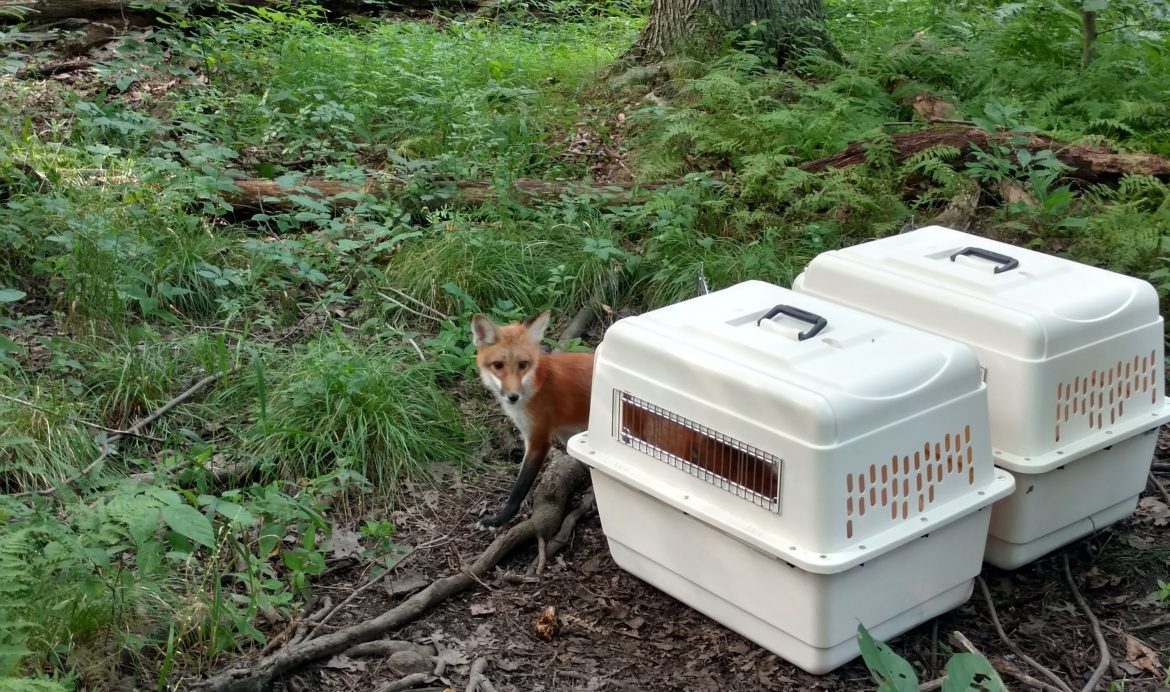 One of the rehabilitated red foxes makes its way into the wild in New Canaan on Aug. 15, 2019. Credit: Olivia Oldham 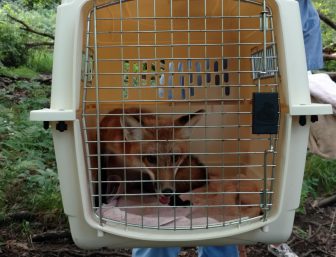 Wildlife In Crisis rehabilitated the young red foxes after they were orphaned. Here’s one of them moments before being re-released Into a New Canaan Land Trust property on Aug. 15, 2019. Credit: Olivia Oldham

The young foxes, one male and one female, had been orphaned earlier this year, according to Dara Reid, director of Wildlife in Crisis, a Weston-based nonprofit organization that has been caring for the pair.

“Both families were killed,” Reid said from the Colhoun Preserve, a 21-acre parcel acquired by the Land Trust in 1974. “One by cars and one by rodenticide—rat and mouse poison.”

Now about six months old, the foxes were in “very poor” condition when they were brought in, Reid said.

“We had to give them fluids and a lot of rest when they first came to us but they have fully recovered and grown at this point,” she said. 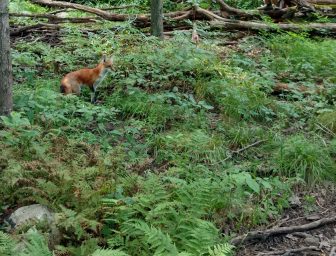 The young red fox is expected to thrive at the Land Trust’s Colhoun Preserve, a publicly accessible property of some 21 acres off of Davenport Ridge Road. Credit: Olivia Oldham

When the cages were opened in a clearing away from the road, one of the foxes was eager for freedom, hesitating only momentarily before bounding into the bushes. The second was more difficult to convince, and her cage had to be tipped nearly vertical before she consented to leave. Quickly finding each other, they disappearing into the undergrowth with a flash of their bottle-brush tails.

“I think foxes are cool,” said Peter Bergne, one member of the crowd. “We see them at our house—in the winter, especially, against the snow.”

New Canaan Land Trust Director Aaron Lefland said the two organizations have been working together for around four to five years to do this kind of wildlife release in what he said was a “natural partnership.”

“We’ve done bird releases…owls, bluebirds, hawks; we’ve done foxes, flying squirrels,” he said, adding, “It’s nice that we can provide them with a home and a safe place for them to have a second shot at life.”

Reid said, “What New Canaan Land Trust does is so important. The most important thing we can do for wildlife, and as far as I’m concerned, ourselves, is land preservation.”

The Land Trust, Lefland said, protects approximately 400 acres of land, spread across about 60 parcels around New Canaan. Eight of those properties, with an area adding up to around half of the total acreage protected by the Trust, are open to the public.

Asked whether the animals that have been released through the partnership seem to do well in the Land Trust’s parks, Lefland said, “We haven’t tracked any of them to see what the success rate is, but we pick properties that have habitats that are suited to what the animal needs.”

Reid said that Colhoun Preserve’s “combination of meadow, woodland, a nice water source, is perfect habitat” for the foxes.

“There’s obviously plenty of prey here,” she added. “They’re omnivorous so they’ll eat berries and acorns and that sort of thing.”

To ensure that the more than 5,000 wild animals (including black bears) Wildlife in Crisis takes in each year for rehabilitation are able to thrive in the wild, it’s critical that they are socialized with other members of their own species, Reid said. These two foxes in particular were raised with about 12 others of their kind, “so they’re very well socialized,” she said.

Reid’s advice for anyone who finds an animal they believe to be in distress was to check the ‘frequently asked questions’ page on the Wildlife in Crisis website, or to call the organization’s clinic phone if they were in any doubt.

“We prefer people to call us for advice before they [approach an animal],” she said. “Especially when we’re dealing with orphans, we definitely don’t want to be taking babies away from their parents.”

Anyone seeking advice about an animal they believe to be in distress can reach Wildlife in Crisis at 203 544 9913, or check one of their three FAQ pages, found here (racoons, skunks, foxes, opossums), here (deer, fawns, rabbits, other mammals) and here (birds).

For information about the New Canaan Land Trust’s upcoming events, see the event page of their website or check out their Facebook page.