The New Canaan Building Department on Tuesday issued a demolition permit for 2,400-square-foot, 1954 split-level home at 142 Overlook Drive. The house, on one acre (in the one-acre zone) had been purchased for $960,000 in April, tax records show.

As of last week, four parties had shown interest in the town’s RFP for the sale of Vine Cottage on Main Street, First Selectman Kevin Moynihan said during a press briefing held Thursday in his office at Town Hall.

Members of the New Canaan Fire Co. No. 1 worked the August NASCAR races at the renowned road course at the Watkins Glen International racetrack in Watkins Glen, N.Y. The NCFC members have passed a rigorous examination and numerous on-site, NASCAR supervised training days in order to get their race track fire certification. Russ Kimes, David Bilotti and Adam Jones are 5-year race track veterans and leaders in the organization. Rob Mallozzi is in his first year as a track Firefighter.

New Canaan Police at about 11:59 p.m. Tuesday cited a 19-year-old Stamford man for possession of less than .5 ounces of marijuana and possession of drug paraphernalia after an officer stopped the driver of the car he was riding in for speeding. The driver, later ticketed, was traveling 60 mph in a 30 mph zone northbound on Old Stamford Road. 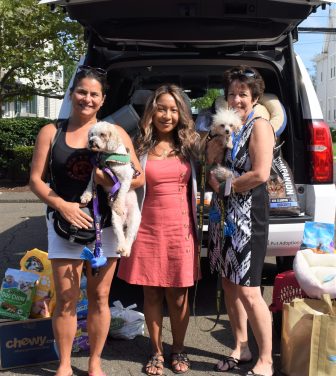 As part of the its Pet Adoption Project, Bankwell recently held a drive throughout its branch network to collect pet supplies and cash donations through its coin machines for local rescues in need. As a result of the drive, Bankwell is sharing the supplies—and has matched the cash donations—to give a total of $2,500 to local shelters, including Ridgefield Animal Operation for Animal Rescue, STARelief and Pet Assistance, Stamford Animal Control, Red Leash Rescue, PAWS in Norwalk, Westport Animal Shelter Advocates. Bankwell is in the third year of its Pet Adoption Project, a program that features photos and information about available dogs and cats from local shelters throughout Connecticut on billboards, ads, social media, the bank’s website, and throughout all of the bank’s branches. The adoption rate at local shelters spiked from the added publicity, with more than 90% of featured animals finding a home this year. Portraits of the featured animals are made possible by local photographer Michael Bagley, who volunteered his professional services to the program. Bagley has photographed more than 10,000 animals over 10 years in an effort to save homeless animals.

A fawn got into the goat corral at Irwin Park and jumped back out on its own.

The Rucci Law Group featured an item on the New Canaan Athletic Foundation in its most recent newsletter.

A reminder of three great local events that are drawing near: 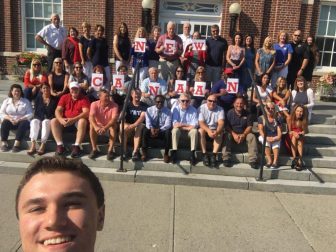 Here’s the Town of New Canaan government selfie in front of Town Hall, from Aug. 15, 2019. Contributed

Dozens of municipal workers gathered out front of Town Hall Thursday for a selfie, part of an effort organized by the New Haven-based Connecticut Conference of Municipalities.

Asked about how much time town employees spend addressing Freedom of Information Act requests, Moynihan said during the press briefing, “Lately, very little,” adding that the activity is down about 75% this year from last.