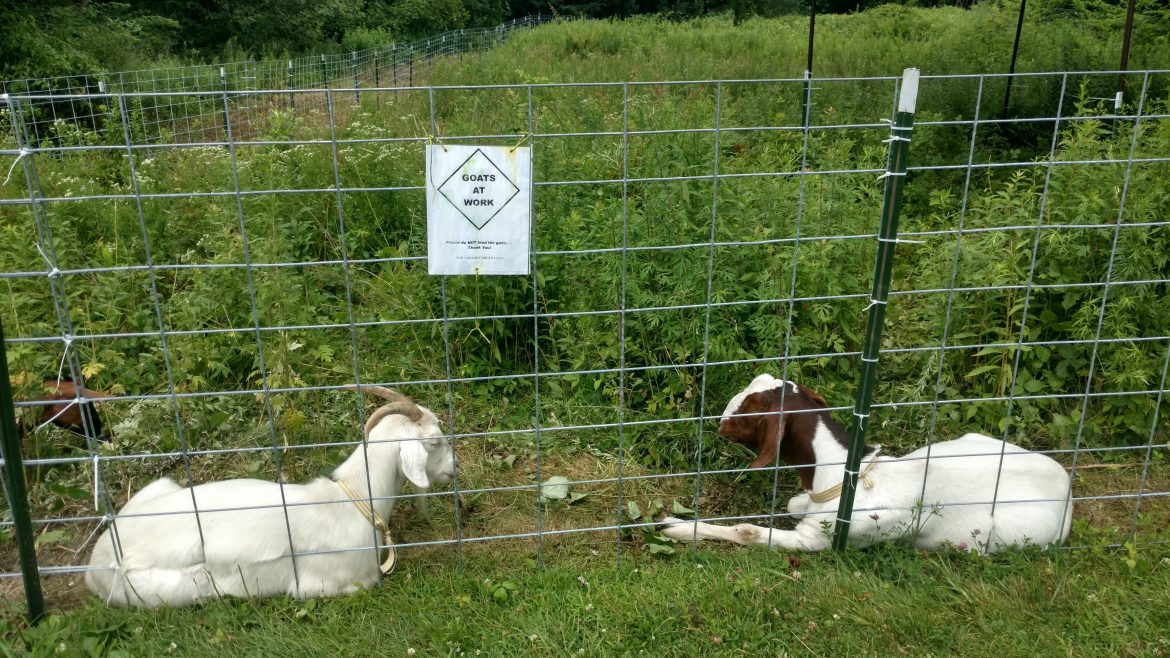 The goats taking a well-deserved rest in the midday sun. Credit: Olivia Oldham.

The goats—Chalupa, Beau, Stewie, Miss Bo Peep and Bella—arrived at a half-acre paddock in Irwin Park on Wednesday, where they “started to eat immediately,” according to Director of Public Works Tiger Mann.

The DPW and the Garden Club have been “battling it out” against Japanese knotweed, a particularly pernicious invasive plant, in Irwin Park, located on Weed Street, for several years, Mann said.

The Garden Club, which proposed the idea of using goats, long has planned to introduce more native species into the meadow area of the park, according to Alice Wyman, the member of the nonprofit organization who helped spearhead the project. Knotweed can easily outcompete many other plants, she said, and its large root-system poses a potential problem for the Flexi-pave paths in the park.

Mann told NewCanaanite.com that until recently, they had used labor intensive mechanical control methods—primarily attempting to pull it out by the roots. That approach wasn’t working, so earlier this year, the Garden Club, which has responsibility for the stewardship of Irwin Park, began to investigate an eco-friendly alternative: goats. Mann said that as the goats graze on the knotweed, its root systems are depleted as it repeatedly tries to regrow until it eventually dies. He said that the process takes two to three years. 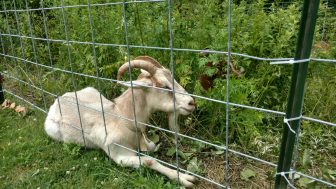 When NewCanaanite.com visited Irwin Park Friday, it was already possible to see where the goats had been at work—large areas of their enclosure had already been completely chewed down.

The goats were chosen as what Mann said was a “better alternative” to spraying the knotweed with glyphosate, a chemical found in common herbicides such as Roundup.

Wyman was “tremendously proud of the New Canaan Garden Club for finding a green way to manage weeds in Irwin Park.”

“The chemicals that are so controversial are a cheaper and easier way to eradicate weeds, but our exposure to these herbicides is linked to a higher cancer rate,” she added, praising the group for finding a solution that did not involve adding chemicals “to a place where our kids and pets play daily.”

Although more environmentally friendly, the goat method of weed control is “way more expensive than just using chemicals. It takes way longer and is a big project,” said Wyman. Fortunately, she said that “generous members of the Conservation Committee of the New Canaan Garden Club have helped kickstart this effort.”

The five goats will initially be at Irwin for about three weeks, with at least one other three-week session this summer, according to Wyman. They will then be back again in spring next year to repeat the process, she said. 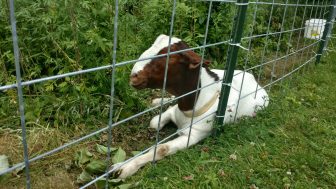 Town officials have been very welcoming of the animals, said Wyman, with the Board of Selectmen voting unanimously in favor of the contract with Green Goats.

“They have really gone overboard in welcoming the farm animals to Irwin,” she said. “Tiger Mann has been a champion of this idea since we first proposed it—we’re really grateful for that. The town has really rolled out the green carpet.”

She added: “I think there’s a little bit of whimsy and magic about this that really appealed to people, just to think about the joy and the connection between animals and people.”

Mann said that because the goats come from a different state, bringing them to town required approval from the Director of Health Jen Eielson. However, due to the temporary nature of the installation, permits were not required from Planning & Zoning or from Inland Wetlands.

Asked for her perspective on the goats, New Canaan Police Animal Control Officer Allyson Halm said that her section had not been involved.

“It’s important that any department that might be even slightly affected would be up to speed,” Halm said. Nevertheless, she was positive about the goats.

“I think it’s a super cool program. It’s an organic approach and I’m hoping for the best,” she said.

Mann said he could see “no downside to it whatsoever.” The goats are expected to draw visitors to the park and provide educational opportunities, he said. 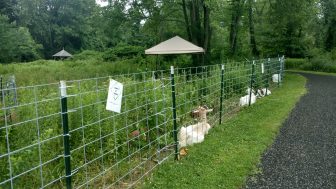 The goats in their paddock next to the path. Credit: Olivia Oldham

An awning has been erected in the paddock, and Wyman said that members of the Garden Club are responsible for filling up their water buckets each day. According to Mann, Green Goats staff also come down at least once a week to check on the animals.

Wyman and town officials noted that predators such as coyotes are unlikely to pose a threat to the goats.

“These are formidable size goats,” Halm said. “They have a strong energy, so I don’t believe we have a risk there.”

Asked if there was anything the public should be aware of, Halm requested that the public keep their dogs at a distance from the goats.

“They’re friendly goats and I don’t want a dog to maybe injure them,” she said.

She and Mann also emphasized that the goats are not be fed.

“They’re working animals,” Mann said. “Enjoy their company, but let them do their job.”

If you would like to support the Garden Club’s goat initiative, donations can be made at the Garden Club website or by mailing a check made out to the New Canaan Garden Club, with “Goat Initiative“ in the memo line, to NCGC, PO Box 1553, New Canaan, CT 06840.

2 thoughts on “‘A Green Way to Manage Weeds’: Goats Arrive at Irwin Park”