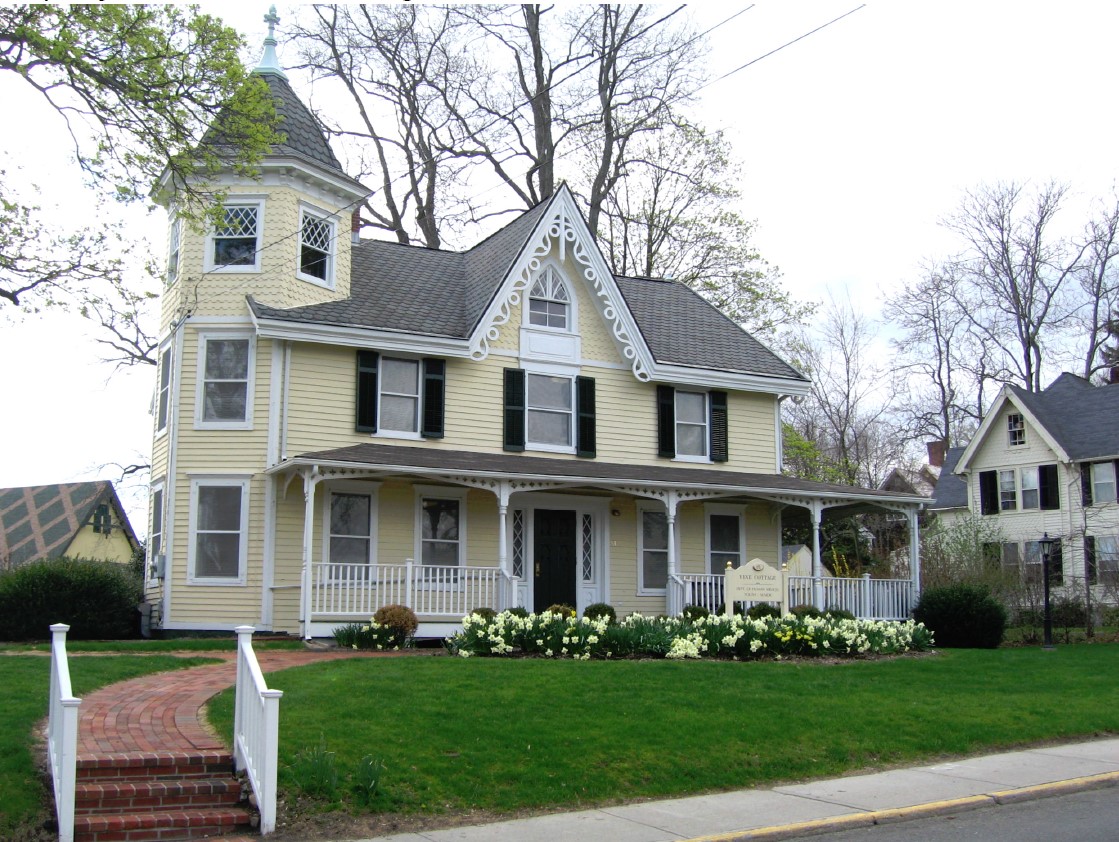 The Board of Selectmen voted 2-1 Tuesday to solicit proposals from those interested in acquiring a prominent antique building on Main Street from the town.

The request for proposals for Vine Cottage, a turreted ca.-1859 structure located opposite the firehouse, would allow for a sale or ground lease to a prospective buyer. Among other requirements, the Town Council would need to hold a public hearing prior to any sale.

Though Selectman Kit Devereaux voted against issuing the RFP, saying it was short-sighted since no one knows what New Canaan’s future needs for such a building would be, First Selectman Kevin Moynihan and Selectman Nick Williams voted in favor of it.

Williams noted that the New Canaan Department of Human Services is leaving Vine Cottage for the former Outback Teen Center.

“I’m on record saying we have too many buildings in town,” Williams said at the regular meeting, held in Town Hall. “I don’t think Vine Cottage is a particularly useful building, in part because it is historic. It has 4,000 square feet. It is not ADA-compliant” and “it doesn’t have to be under ADA guidelines.”

He continued: “What I want for Vine Cottage from the outside is to look exactly as it does today. You raise a good point: Would we need that space in the future? … In fact, we have got enough space [at the former Outback] to rent out half of it. So, I’m not too concerned about personally having enough buildings to house our employees—we have got Irwin [House], which we are not using any more because we have this [renovated and expanded] Town Hall building. So I just want to protect Vine Cottage historical value, but I don’t think town usage standpoint we need it.”

Town officials for years have debated what to do with Vine Cottage, as well as just how much money is needed to maintain it. The Town Council in early 2017 rejected a proposal to approve $550,000 for a renovation, though many in favor of keeping the building have said since then that it needs far less money. In December 2017, a town committee recommended putting off a decision on renovation until the future home of the Board of Ed is determined.

The following summer, Moynihan said that the town’s five-year capital plan included no funding for the building and that it likely would be sold. Devereaux in November pushed back on the idea, saying more public input is needed, though the Board of Finance supported it.

The RFP came before the selectmen last month and the Board decided not to approve it after Williams and Devereaux called for stronger wording that would require protecting its historic nature.

Ultimately, Moynihan and Williams voted in favor of issuing the RFP on condition that language be added to it warning prospective buyers that the property may become part of New Canaan’s Historic District. If it does, the new owner would need approval from an appointed body that oversees the Historic District in order to alter its exterior, as per locally adapted state law.

During Tuesday’s meeting, Devereaux said that once the “necessary restrictive covenants” are placed on Vine Cottage, “the value of it will be impacted.”

“And at some point we will look next door at land we built steps to and that we have a walkway to, and that if it’s for sale for a reasonable amount of money, we would be buying it instead of selling it,” she said. “And I feel it’s kind of short-sighted to essentially get rid of the building because we do not know what our needs and requirements will be in five to 10 years.”

She added, “I would contend that the building had a perfectly good use which we took away from it. We moved the use away, making the building useless.”

Referring to the report from the now dissolved Town Building Evaluation and Use Committee, which studied and made recommendations about more than 50 town-owned buildings (excluding those in the school district), Devereaux said, “When we did our building inventory, it isn’t as bad as it looks, because we’re counting pump houses and coverings at beaches and anything that had a roof was counted, and I also think because we had too many buildings it doesn’t mean every building is up for sale. Some buildings are too important to sell, and this is one of them.”

Williams said he hoped that New Canaan would get back more than one proposal for the building and that if it’s eventual sale price doesn’t fetch enough interest, the town could “take it off the market like other people in town have done, unfortunately.”

“But we are not going to give this away,” he said.

Historians say that early owners of the residential structure, Albert and Cornelia Carter Comstock, who would become founder of the New Canaan Chapter of the Daughters of the American Revolution, named it ‘Vine Cottage’ for the flowering vines which wove their way around its front porch.

The sales price and the final form of a “restrictive covenant” regarding ways a future owner could alter the Victorian gothic revival/Queen Anne building have yet to be decided.

Vine Cottage has 2,334 square feet of finished space, according to tax records. The future doesn’t include the porch or basement.

Four residents took to the podium during the selectmen meeting to address the Vine Cottage item, including Charlie Robinson, Patricia Oxman, Betty Lovastik and Mimi Findlay.

Robinson called for the town to include more specific information in the RFP that would require a buyer or lessor to have its contractors abide by historic preservation standards. Oxman said she wanted Vice Cottage included in the Historic District and asked what agency would be responsible for enforcing preservation-related restrictions on the building. Lovastik cited a letter from Town Councilman Joe Paladino, who called it a “critical mistake” to sell any part of the Town Hall campus, including Vine Cottage, and pegged the work needed to maintain it at $220,000. Findlay questioned whether the town was empowered to place restrictive covenants on the building and urged the Board not to restrict a future owner from changing its color scheme, saying the current pale yellow with white trim was not original but true to a “1920s Colonial revival mentality” and that “microscopic analysis of the paint” would be needed to identify its original color which likely was beige or gray, and then darker once towers were added to the building.