When New Canaan High School’s offensive linemen bent down to place their hands in the dirt for the final time last weekend, the center reached down to grasp the worn-out football, and the quarterback prepared to take the final snap of his high school career, everybody in the stadium knew that the Rams had done it. 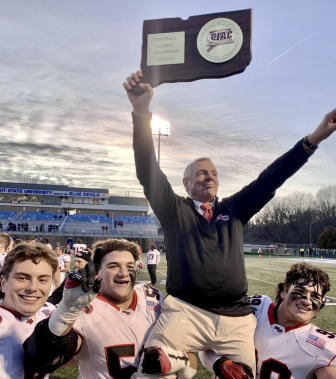 Quarterback and senior co-captain Ty Groff snapped the ball on the cold Saturday afternoon of Dec. 10, placed his knee on the ground, and the celebration began.

“There was no team that deserved it more than us,” Groff said following New Canaan’s 16-13 victory over the Maloney Spartans. “I could not be more proud of every single player on the team, as everyone always put their best foot forward and helped us get better.”

The game began as a defensive battle, with New Canaan taking a 6-0 lead behind a pair of field goals from star kicker and quarterback Ty Groff. However, Maloney returned a kickoff 95 yards for a 7-6 lead, then followed that up with another touchdown, this one via the air, and had a 13-6 lead heading into the 4th quarter.

It seemed the Rams’ miraculous season was coming to an end, that they were all out of gas.

Then a switch flipped. 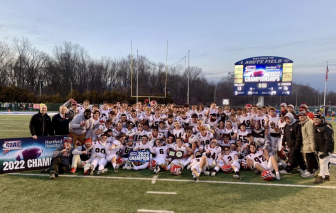 As he has all season, senior running back Hunter Telesco kickstarted a fight in his teammates and punched it in for six on the ground. The defense responded by stopping the Spartan offense, and Groff marched his team down the field before kicking his third field goal of the game. With that kick, he set the new state record of 27 career field goals and gave his team a 16-13 lead with two minutes left in the game. The stifling Rams defense once again prevailed against the Spartan offense, and the team that built themselves on toughness and grit took home Connecticut high school football’s highest prize.

For senior co-captain and safety Walker Blair, this state championship was more than a football game.

“To win for our town, our families, our teammates, our brothers, and our school, it means everything,” Blair said.

The coaching staff knew coming into the season that the team had a chance to be special, led by a senior class that had been contributing at a high level throughout their high school careers.

Defensive Coordinator Chris Silvestri spoke this season of the potential that the team had to leave a mark on the program.

“This is their legacy, and they have a chance to be remembered for some really good football if they continue to take it one game at a time,” Silvestri said following their lone loss of the season. The team moved past that loss quickly, never looking back and finishing the rest of the season 6-0, cementing their names in the history books.

The team faced its fair share of adversity, from an abundance of injuries to a crushing home loss to St. Joe’s.

Junior wide receiver Will Langford said the Rams were “fueled by an excellent group of senior leaders paving the way and setting an example of the relationships we should make with our teammates, something that clearly translated to the field.”

“Football is a game played with your brothers, and every single person on the football team is my brother,” Langford said.

Now, all there is to do for those seniors fresh off of adding a ring to their collection is to reflect on what got them to this point. That’s exactly what senior linebacker Matt Salmini did after a season in which he recorded four and a half sacks and three interceptions and, most importantly, in a season where his team won.

“Winning the state championship has always been a goal for us ever since we were kids playing football in third grade.” Salmini said. “Watching the people before us has made this win always been a dream of mine, and to see it happen is truly a storybook ending.”