New Canaan’s first K-9 Police dog in more than two years started his patrol on our nation’s birthday on Saturday, at the 35th annual Family Fourth celebration at Waveny. 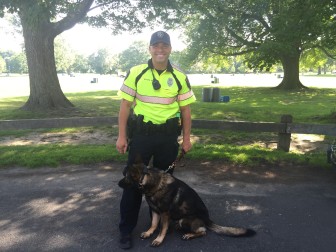 Apollo, a full-breed German Shepherd dog, has been with his partner, Officer David Rivera for 2.5 months, and lives with Rivera at his house. He is cross-trained as a patrol dog who also has a narcotics certification, the police officer said. Apollo will assist police in finding missing items, persons, and also locating narcotics.

“His ability to find people, I would say, is the best tool that is going to be brought to the town,” said Officer Rivera.

Rivera describes Apollo as a funny dog who is willing to do anything for his ball. During an interview with Rivera and Apollo, the dog continuously sniffed Rivera’s pocket where the officer keeps the beloved toy.

Because of his extensive training, Apollo has developed a keen sense of smell and would potentially be able to find a person missing in Waveny Park within minutes. 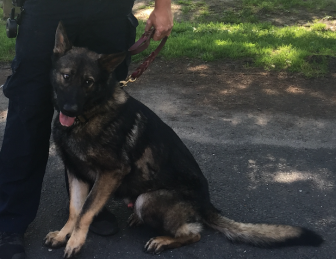 Residents can expect to see Apollo and Officer Rivera on patrol around town beginning Tuesday.