Soon and for the first time in more than two years, the New Canaan Police Department will have its own K-9 dog trained in apprehending suspects, sniffing out drugs and tracking missing people and items. 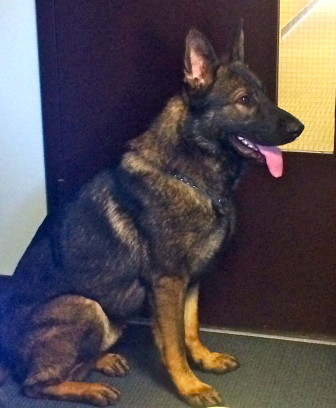 Apollo, the newly purchased German shepherd dog that will serve as the police department’s K-9, will undergo training starting May 15.

Apollo, an 18-month-old German Shepherd dog from Washington state, is bonding with newly designated K-9 Officer David Rivera, and will start formal training in about two weeks, according to Police Chief Leon Krolikowski.

Purchased entirely with generous donations to a K-9 fund for the department, Apollo “perfectly balanced,” the chief said.

“Meaning that he’s very social and calm, but then when he needs to work, he works,” Krolikowski said. “He’s a dog that you can trust.” 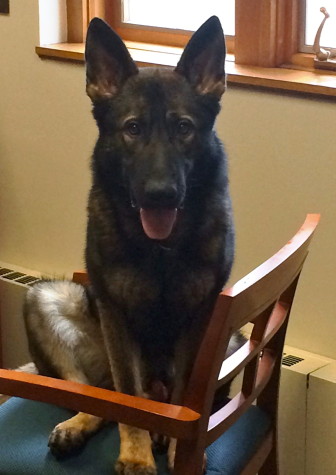 Another look at Apollo, the NCPD K-9 dog.

Apollo’s formal training doesn’t start until May 15, though he’s already spending all his time with Rivera, riding along in the cruiser and living with the police officer. The animal will undergo certification training in patrol work (apprehending suspects), tracking and narcotics (heroin, cocaine, methamphetamines and marijuana), Krolikowski said.

“He will be able to go up to a car and tell Officer River whether there are drugs in the car, and very accurately,” the chief said. 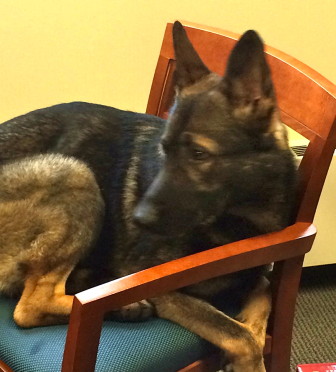 Apollo made himself comfortable in the chief’s office at NCPD.

The Board of Selectmen on Tuesday approved a $14,500 contract with trainer Frank Reda of New Milford-based Superior K-9 Services for the dog and six to eight weeks of training. Krolikowski during the meeting said of Apollo: “He’s exceptional.”

Each of New Canaan’s neighbors—police departments in Wilton, Darien, Norwalk and Stamford—has its own K-9 unit, and though local police have been able to use those dogs as needed, it’s no guarantee that they’re available.