A longstanding children’s clothing store in the heart of downtown New Canaan will close at the end of next month, its retiring owner said.

Littlejohn’s at 120 Elm St. opened in 1990 when Anda Weyher and her then-business partner, both former New Yorkers, decided to bring their own fashion sensibility for children to New Canaan. 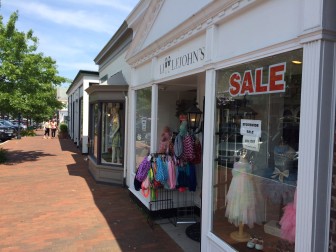 Littlejohn’s children’s clothing store on Elm Street is closing at the end of July 2014 after 24 years in New Canaan. Credit: Michael Dinan

Since then, the boutique shop has emerged as a fixture, first at 21 South Ave. and then to its 1,350-square-foot space on Elm.

Reached by phone Wednesday, Weyher said she has enjoyed her 24 years in town and that may of her regular customers have become “best friends and good friends.”

“That was the emphasis we put on the the store, customer service and a friendly face,” said Weyher, a longtime Fairfield County resident. “We would do whatever we could to make our customers happy and satisfied so that they would come back. The kids I used to dress when they were babies, they’re grown up now. Some of them are even married.”

Littlejohn’s is a member of the New Canaan Chamber of Commerce. Chamber Executive Director Tucker Murphy said Littlejohn’s has had a great run in town and that she wishes Weyher well in her next phase of life.

There’s a 40 percent off “retirement sale” at Littlejohn’s now and the store will participate in the July 19 Village Fair & Sidewalk Sale with special plans yet to be unveiled, Weyher said. Though she’s retiring, Weyher left open the possibility that within a year, she may re-enter the children’s clothing business in the area.