A cherished sweet-treat tradition in New Canaan is in danger of going away following an incident involving an angry customer Tuesday night. 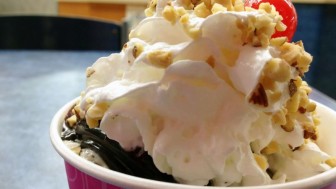 A 2-scoop sundae at Baskin Robbins.

Buy-one, Get-one free or “BOGO” Tuesdays at Baskin-Robbins have been a popular tradition in town for more than a decade, preserved here even after the national brand moved away from it more than five years ago.

But that may have changed for good after a woman threw a free sundae on the floor behind the counter at the Main Street ice cream and candy shop after berating its workers.

At about 8:15 p.m., the shop’s manager said, a man ordered a banana split sundae and a two-scoop sundae with two hot toppings (hot fudge and peanut butter sauce) and one cold topping (marshmallows), for the BOGO promotion. The entire order cost $9.45—the cost of the banana split plus 85 cents each for the two extra toppings.

Exactly 35 minutes later, video surveillance showed, a woman identifying herself only as the man’s wife cut the line at Baskin Robbins—it wound all the way to the door—saying that her sundae was inedible because it had melted and demanding payment for the entire $9.45 order, the manager said.

When the workers said they could make the sundae again but were not authorized to remit that payment, she began waving her receipt at them and finally threw her sundae on the employees’ floor behind the counter, as well as the bag that the ice cream had come in, the manager said. The entire scene is captured on video and was witnessed by multiple people, the manager said.

On Wednesday morning, she came to Baskin Robbins again and demanded the full reimbursement, as well as the cost of gas for her vehicle because, the woman said, she had to make to extra trips to the shop, according to the manager. Ultimately, the store’s owner, Anna Valente, reimbursed her $6.80—the would-be cost of a two-scoop sundae with three toppings, a dessert which the woman hadn’t paid for since it came as part of the BOGO promotion.

Asked whether she intends to pursue criminal charges, Valente said only that she does not want to subject her workers to angry customers and likely will need to halt BOGO Tuesday as a result.

“This is not a mandatory program that we do,” Valente said. “I do it for New Canaan. This program ended five years ago. I do it because people enjoy it. I’ve never had issues with it. But now when you start throwing sundaes back at my employees, I’m not doing it. These kids work too hard.”