It was a season that many of those who either were part of, or witnessed, the 2015 New Canaan Boys Lacrosse team (13-3, 10-1 FCIAC) will not soon forget—a year that culminated in a Class M State Championship. 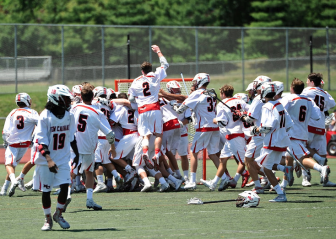 The New Canaan Rams boys lacrosse team earned a Class M state title with a 10-5 win over the Daniel Hand Tigers on June 13, 2015. Now the 2016 squad is poised to get another one — and more. Credit: Chris Cody

On a team that had 23 seniors, including All-American attackmen Michael Kraus and Justin Meichner; outstanding defensemen in Frank Cognetta, Logan Hart, Sterling O’Hara, Liam Harris, and Chris Keeffe; midfielders Owen Toland and Max Begoon, as well as face-off specialist, Teddy Dumbauld, the 2015 Rams were blessed with some of the finest senior talent in the history of the boys lacrosse program.

But while those guys will be missed by their former coaches and teammates, Rams Head Coach Chip Buzzeo has his 2016 roster reloaded and ready to repeat.

“It was great to end last year with a state championship,” Buzzeo told NewCanaanite.com. “We’re going to miss those guys. I’ve known them for a very long time, and each is doing great, whether in college or doing a post-graduate year. But we’re looking forward to the people we have coming in to replace them who are just as good.”

Starting at attack for the Rams in 2016 will be senior Clayton Burt and junior Jackson Appelt, with the third starting spot up front still in the midst of a competition between Richard Magnus, Danny Villeneuve and Matt Bisceglia. Moving to the midfield, New Canaan returns all three of its starters from 2015 in senior tri-captains Kyle Smith and Peter Swindell and junior Ryan O’Connell, giving them valuable experience at that point of the field. 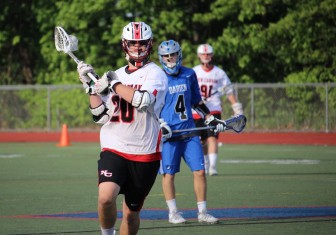 Senior tri-captain Kyle Smith (pictured), along with fellow senior tri-captain Peter Swindell, return to help man the midfield for the Rams in 2016. David Strupp rounds out the team’s trio of captains, helping lead the efforts on defense. Credit: Terry Dinan

Backing them up will be senior Jono Betack and juniors Jack Hoelzer and Graham Braden. On the defense is now three-year returning starter, and completing the trio of captains, David Strupp. And he’ll be joined on the back line by juniors James Crovatto and Andrew Bauersfeld. New Canaan’s long-stick-middy starter will be James Freyre and returning starting defensemen-midfielders are the younger twin brothers of Frank, Mike and Matt Cognetta. Then the starting lineup rounds out in goal, where after a stellar sophomore campaign, junior Drew Morris returns to man the space between the posts. 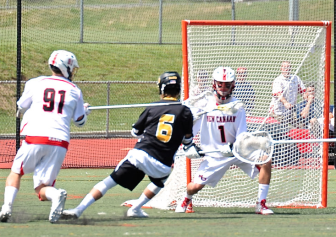 Goaltender Drew Morris, seen here making a save in the Rams state championship win over Daniel Hand in June 2015, returns for his junior campaign looking to build off the success of his sophomore season. Credit: Chris Cody

“We’re excited with what we have returning,” Buzzeo said. “We have a lot of starters returning, a lot of guys who played a lot of minutes for us returning. The guys who left us set a great example, just like the outgoing classes of the past three years since I’ve been here did. But each of those years, the next guy up has been ready to follow very well. We have not been hurt since I’ve been here by a graduating class. Every year it happens, but the new class steps up and takes on those roles. Which is a testament to our youth program and all the coaches there, as well as here [at the high school]. We’re all doing our job of developing players to the point that they’re ready to fill in at the varsity level when it’s their time.”

And what excites the head coach most about his 2016 squad, is that the collection of talent he has gives the Rams as balanced a team he has ever coached while with the program. 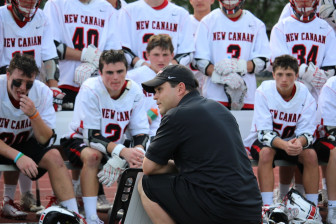 “It’s honestly the first time I can say that,” Buzzeo said. “In years past we’ve either been strong defensively or strong offensively. But this year we’re deep at every position. I think we’re equal in every position in terms of the offense is equal to our defense. So I’m excited about that,to have a team like what we have entering this year. It’s a special thing to not have to worry about one facet of the team. So we’re excited to get on the field and compete. We’re going to be very competitive.”

And competitive and more is what they must be if New Canaan wants to see an FCIAC crown included in their 2016 trophy case. The conference is always extremely difficult, and one Coach Buzzeo describes as, “one of the best five conferences in all of America.” The traditional powerhouses of rival Darien, Ridgefield and Greenwich are all expected to be tough opponents once again for the Rams in 2016.

And Coach Buzzeo believes that programs who in years past have made up the conference’s middle tier-teams such as Staples, Wilton, and Fairfield Ludlowe are poised to take that next step this season to be able to go toe-to-toe with those perennial contenders. So if you combine the increased depth of competitive teams in the FCIAC, and the talented out-of-state opponents that are on the Rams schedule this year, New Canaan will be tested frequently in 2016.

But that’s exactly what Coach Buzzeo wants. Because it prepares you for where the Rams want to end up—the playoffs. And the New Canaan coach believes that playoff preparation will begin with game number one on Saturday when the Rams travel all the way down to Maryland to play Loyola Blakefield, a prep school located in Towson, MD, one of the prominent high school lacrosse programs in the country.

“It’s a great experience for our guys,” Buzzeo said. “Just to travel down there and play a competent team from the M.I.A.A. conference which is, arguably, the number one or number two conference in America. They’re one of the best teams this year. They’ve had an outstanding year so far. But many of our guys have played club lacrosse for different teams. So they’ll enjoy going down to Maryland and hopefully this is something that, again, just gets us ready for the playoffs. It should be a lot of fun. I know our guys were excited about it once we put it on the schedule.”

After the season opening game against Loyola Blakefield, the Rams return to the field on Tuesday, April 6 to commence their home schedule, vs. Fairfield Prep at 4:30 p.m. at Dunning Stadium.