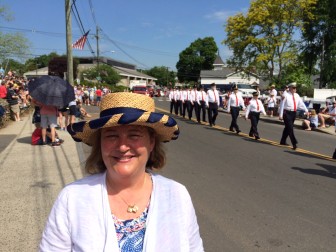 It was more than a decade ago, and the pair stood atop the hill at Conner Field, watching 9-year-olds play in a baseball game that had dragged on for nearly three hours.

Stadler, then president of New Canaan Baseball, recalled saying out loud that the game had been going on too long.

“And she says, ‘Yes, it’s too long,’ and so we started this conversation and she says what about this and that, and I said, ‘Tracey, would you like to be on the baseball board?’ It was the first time we’d met and I didn’t know her from Adam.” 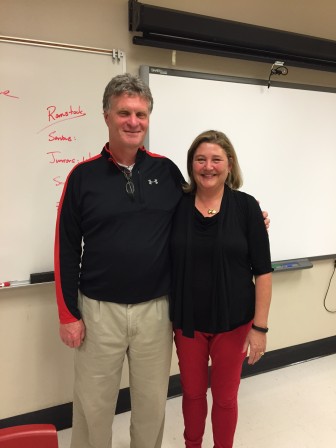 In characteristic fashion, Karl said ‘Yes’ to the demanding volunteer position and went on to make lasting changes to the organization that have streamlined and otherwise operations, all with a goal of improving the youth sports experience for New Canaan kids.

“I think the world of Tracey,” Stadler said. “She is absolutely every board chair’s dream of a board member. She is just unbelievable. Gets the job done.”

For more than 20 years, “the job” for Karl has included stints with the Young Women’s League, PTCs at South, Saxe and New Canaan High School, New Canaan Baseball, NCHS administrative offices and perhaps most notably, All Sports Booster Club.

With her youngest son, Thomas, set to graduate from NCHS next month, Karl is stepping down as president of the Booster Club and kicking her immeasurably effective years of local volunteerism into a lower gear—a move that Stadler and others who have worked alongside Karl say will booked what has been a singular and indelible run in the community, marked by creativity and diligence and efforts that have been copied in surrounding communities. 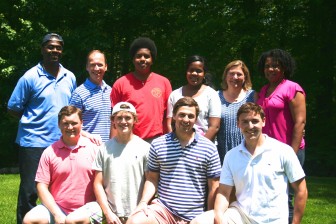 NCHS Athletic Director Jay Egan said Karl’s legacy—and voice—is seared into his head inextricably: Before he launches a new project or initiative, he has her voice in the back of his mind, and anticipates her questions prior to sending a proposal forward. 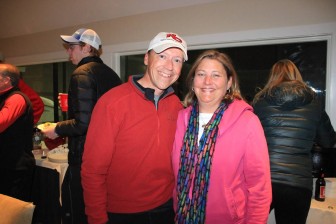 Here’s a quick list of what Karl has done since joining the All Sports Booster Club some 10 years ago, serving for most of that time as its president: Changing its name from ‘New Canaan Sports Council’ to the more fitting ‘All Sports Booster Club’; creating a membership drive out of what had been a “patron drive”; guiding the creation of scoreboards at Dunning and the water tower fields; moving away from the “Red Book” and launching the club’s website at http://ncrams.com, which is a hub not only for online registration for athletes but also camps and clinics.

Egan said Karl’s efforts have yielded new levels of transparency in record-keeping, among other benefits, and that some of the initiatives she led, such as the scoreboards, have been copied at places such as Darien High School, Staples and Brunswick School. 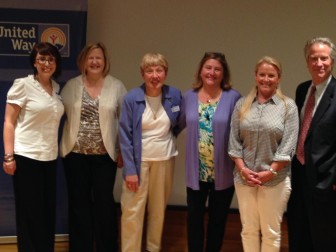 “She is an extremely committed volunteer as far as New Canaan High School is concerned, and as a volunteer in generation in the community,” he said. “She has always left every program way better than it was when she started, and that was 100 percent true of the All Sports Booster Club.”

Sue Benko, who has worked alongside Karl as a member of the All Sports Booster Club, underscored how important the organization is to NCHS athletes: It means that students don’t have to go out and fundraise every year for their teams as they do in other places, Benko said, because they’re selling memberships and tickets to games through the club.

In addition to creating a hub for summer camp registration online, Benko said, the increasing popular camps have evolved into places where high school kids work as paid coaches each summer.

“So it’s kind of this big group of people helping each other,” Benko said, and Karl has been a behind-the-scenes person at the center of its huge success.

“I’ve worked with her and I now she works very, very hard on things that are not necessarily visible or things people would know about,” Benko said. “She’s very organized and she’s kind of the guy behind the curtain making things happen and making things work the way they’re supposed to work. She just tackles the job and gets it done.”

Egan said the New Canaan Sports Council had always sold “spirtwear,” even before it was popular to have NCHS-emblazoned gear, and credited Karl with having the insight to boost that program and “take it to the next level, like she does with everything she’s involved with.”

In the case of Rams-branded gear, that meant figuring out the hot items and coming through with seat cushions, sweatshirts, umbrellas and other items that positively impacted the club’s cash flow and reach, Egan said.

Karl—one of 20 volunteers who works in 3-hour shifts at the NCHS main office—said she started volunteering in 1992 when her first child (Kevin, now 25 and a college graduate) was two years old.

Volunteering is impulse that Karl, formerly Tracey Geist (a 1980 NCHS graduate, she married her high school sweetheart, Steve Karl), said she inherited from her parnts.

“So I grew up with it, and I married a Karl—and that family has always volunteered—so it wasn’t new to me, I just did things that I liked, and when my eldest in nursery school in a ‘twos’ class and I met a few people on the board of the Young Women’s League, I joined,” Karl recalled.

Asked about his wife’s involvement in the All Sports Booster Club and other organizations, Steve Karl (the couple married in 1987) said he’s always been known locally as “Tracey’s husband.”

In addition to working part-time for a local CPA, Karl more recently has been involved in painting ornaments at the New Canaan Historical Society and she is helping to plan her class’s 35th high school reunion.

“It may be a job or it may be volunteer work, but it will be something I love, whatever I do.”

One thought on “‘An Extremely Committed Volunteer’: High Praise for Tracey Karl as She Steps Down from NCHS All Sports Booster Club”