Animal Control officials are reminding residents that June is birthing season for deer and it’s not unusual to see fawns on their own around New Canaan. 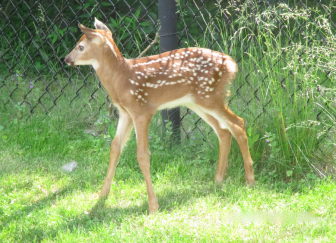 This baby deer or fawn was seen at the Transfer Station on June 8, 2018. Photo published with owner’s permission

People should “leave fawns alone” as their mothers will leave an odorless, motionless baby up to seven hours when it’s too young to follow her, according to Officer Allyson Halm, head of the New Canaan Police Department’s Animal Control section.

“We ask residents to not touch the fawn for 24 hours,” Halm said. “Ninety-nine percent are gone within that timeframe.”

Fawns typically weigh from four to eight pounds at birth and are under their mother’s care through September, when they’re weaned, according to the Connecticut Department of Energy and Environmental Protection.

“The number of young born ranges from one to four, depending upon the age and condition of the doe,” according to a DEEP factsheet. “In Connecticut, twins are common and triplets and quadruplets have been recorded. Female fawns born early in spring have the potential to breed by the following fall.”

Halm on Friday came upon a fawn, likely just hours old, at the Transfer Station. She said she managed to herd the animal to a safe area out of the roadway and left the youth until it’s mother returned.