“Hello, my name is [her name] and I am a rising senior at New Canaan High School. Recently, I was granted a $25 parking ticket due to overtimed-parking. My car was parked on the street side of Morse Court (I was parallel parked, meaning I was in the ’15 minute zone’). THe reason I was parked here was to retrieve my lunch from Spiga (it was an order I called in ahead of time). Keep in mind my car was the first car closest to Main Street – I could quite literally see Spiga outside my windshield. Although it is debatable whether or not it did take 15 minutes for me to retrieve for my food, I walk out of Spiga only to see the New Canaan parking control ticketing my car!!!! I frantically ran across the street, pleaing for freedom from this parking ticket. I’m sure you could imagine my surprise and exasperation, due to the extreme closeness of my car and the restaurant. It was across the street. As I approach my car, the man ticketing me say ‘Oh, I’m sorry. Next time. you’re in town, I’ll owe you one.’ But, this does not serve as much to help me, as, how am I supposed to know the next time he’s in town? If he can ‘owe me one’ a few days later, why can’t he just ‘owe me one’ now? And as an icing on the cake, as I was frantically running to my car, I also dropped my lunch. It was still edible, but not as enjoyable, to say the least. Although I work for the New Canaan Rec Department, I am only making minimum wage, creating an insufficient supply of funds, which holds no space for a parking ticket, nonetheless. With all this said, I ask for your mercy for this parking ticket. Plus I’m sure my dad wouldn’t be too happy if I told him.” 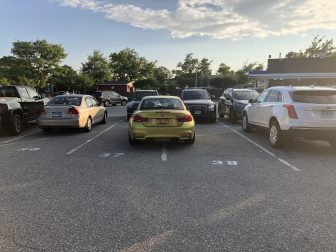 “I got a ticket for parking in handicap. There were no lines on the road and I wasn’t in front of the sign. There was another vehicle that had a sign on their front window.”

“I had just picked up my daughter and her service dog. She has a disease and she asked me to quickly get her some food. She is a vegan and I quickly pulled into a loading zone which was in front of the vegan take out store on Burtis Ave. I didn’t want to let her walk in alone as she could faint so I left her service dog in the car with the motor on and escorted her into the store holding her arm. I went out as I noticed I was getting a ticket. I did not disclose to the parking officer about my daughters illness. As that is private. However I did say her service dog was in car I just went out quickly to store. I did not explain fully what was happening. I was worried as I left my daughter in the store. This was an emergency and I’m asking that you not penalize me for helping my daughter who was very weak and shaking from her medical condition disability.” 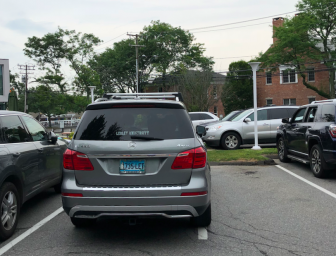 “Parked in a handicapped spot – over the crosswalk line – because, the car in front of me was blocking me, making impossible to be within the lines. when it’s raining & a person is handicapped, the officer should have a bit of heart as long as there is enough room for people to get by. There was more than enough room to pass. Please forgive!”

—$75 for obstructing the crosswalk on Forest Street at 2:03 p.m. on July 6 (Stamford resident)

“Polite interaction with parking enforcement. Apologized and explained the situation. Very sorry. Paralleled my vehicle as close as I could w/flashers. Stepped out of vehicle picked up a phone for my grandmother and stepped back. Tire was in cross walk. I did not park and walk far due to a stomach bug and dehydration with the heat. I am sorry for the mistake.”

“Hello – we were at the library on Monday afternoon (7/9). My son and I then left to go to elm street for lunch and returned to the library a short time later and therefore were not in violation of the parking rules.”

“Did not realize I was in a cross walk no white lines and the parking sign had arrows point both was for parking.”

“I ran into a stairwell to drop off a wallet i found at starbucks. I saw the ticketing officer doing his rounds and was in sight of my car the whole time. I would have been able to see someone wanting to park in the space and been able to move my car.”

“I received this ticket on June 25, 2018 after parking in front of the medical building on Grove Street for an appointment there. There was no one parked in any of the spaces on this street. I am 67 years old and in all my years of driving I did not know you could not face either way in a parking space. At the time there was no traffic at all and I did not endanger anyone. I am not contesting that I parked incorrectly, but I simply did not know it was wrong. I hope you will consider a written warning instead of a fine.”

“On 6/18/18, I drove up Elm, then took a left turn onto South Avenue and an immediate left into the town parking lot. Vehicles were parked all along the side walk but I noticed there was an available space in approximately the middle of the block. Looking to to see if the space was large enough for my car and visually scanning for pedestrians, I noted two signs, both of which said ‘Free Parking for 15 Minutes.’ So, I parked in the space. I picked up a book I had ordered at Elm Street Books and returned to my car to find I had been ticketed. Driving from the spot where I had parked. I looked back and noted that the yellow paint indicating a ‘no parking’ area was faded and worn. It was not clearly visible when I parked my car as I had not been looking at the ground but at the signage. I took a photo of the spot. Later, after stopping at the library on Main Street, I noticed, there was in front of the Wells Fargo Bank, a bright, clearly painted, yellow marked no parking area on the street. But, there was ALSO a sign, ‘No Parking,’ at driver’s vision level. In all fairness, this ticket should be nullified.”

“When parking I was happy to have found what appeared to be a legal space. I observed the location more than once just to be certain it was not prohibited. When I arrived soon after and found a ticket on my window I was shocked. I investigated the area carefully and discovered a loading zone sign 3-4 feet beyond my car. I walked 30 feet in front of my car to the nearest corner lamp post and read a sign allowing parking but tucked up above this sign hiding under a hanging plant was another sign designating the corner to beyond my car as a loading zone early in the morning. Perhaps if I was a local resident I’d have prior knowledge but in all fairness the only way I could view the sign was to move the obstructing plant to the side. I am hopeful under the circumstances that this can be resolved fairly.”

One thought on “‘As I Was Frantically Running To My Car, I Also Dropped My Lunch’: Parking Ticket Appeals”