A variance to New Canaan’s noise ordinance—secured by public works officials by way of locating beside the expanded Town Hall a pair of large chillers to support the structure—is at the center of a disagreement between an abutting commercial property owner on Main Street and the town. 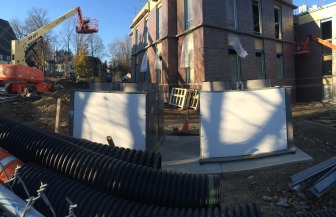 According to Terry Spring, a town resident and managing partner of Cody Real Estate LLC—which owns the commercial buildings on Main from the former Varnum’s Pharmacy building across to the Baskin-Robbins space, including the large lot behind them—the chillers will emit noise that could undermine her family’s efforts to develop the property. Specifically, Spring said, the increased noise could hamper her ability to convert her buildings into “mixed use” structures that include ground-floor commercial space and upper-story apartments.

First Selectman Rob Mallozzi disputes those claims, saying the chillers themselves contain mechanisms that minimize noise to what is still a low level and that Spring’s challenge stems in fact from frustration about a separate matter. Specifically, he said, Spring’s talks with the town this summer about installing a parking deck on her property—which would have helped create much-needed access between her lot and Town Hall’s—eventually broke down, a frustration exacerbated as the chillers now are located in a spot that blocks what had been an accessway between the lots. (The $18 million renovation is on time and budget, officials say.)

The state Freedom of Information Commission has granted a hearing to Spring, who is seeking all correspondence surrounding the New Canaan Department of Public Works’ Nov. 13 2013 request for a variance to the town’s noise ordinance (it was granted April 15 by New Canaan’s health director).

Under that ordinance—see Chapter 36A of the Town Code—noise emitted from things like motorized machinery and generators cannot exceed 45 db when measured from the receptor’s property line. Mallozzi said that the chillers New Canaan purchased for Town Hall include sound-mitigating “baffles” that reduce noise to the “acceptable decibel level,” under the variance, of around 70 db.

Under section 36A-8, a variance may be granted by New Canaan’s director of environmental health so long as an applicant satisfies certain conditions. As Mallozzi noted, no language in the Town Code says that officials must hold a public hearing prior to rendering a decision, though a rejection would have had to list reasons for it. (The section says that “any person aggrieved” by the health department’s decision must notify the health director within 14 days of that decision.)

Spring filed her FOI request on Sept. 10. In it, she asks to inspect “the Health Department’s complete file covering this request.”

“I have previously requested same over one month ago and it has not been made available to me,” Spring said in her Sept. 10 letter. “Should I need copies of any of this information, I will be responsible for covering this cost.”

On Oct. 2, she notified the FOI Commission that the town had failed within four days to provide the requested information. The date of the hearing for Spring and the town before the FOI Commission has not yet been set, according to the state agency’s Nov. 12 letter to municipal officials, on file at the Town Clerk’s office.

Asked about her FOI request, Spring said she had thought the chillers would be placed on the roof of the renovated Town Hall, and that she hadn’t been notified about a plan to locate them elsewhere. (Originally six feet from her property line, they’re now about 12 feet away, she said.)

Spring said the town had been “very generous” about providing her the specs for the chillers in advance and that she hired a sound consultant to get a handle on how noisy they would be.

“They are very noisy pieces of equipment and they exceed the decibel level,” she said.

“I am looking for information as to what happened,” Spring added. “How they decided this, why we did not get more notices, were there more notices, is there any more technical information available—information that specifies a unit is factory-tested before it’s shipped, I requested that and got nothing—who made the decision to move it? Ostensibly, there is no rhyme or reason as to how all of this happened and we were not consulted, we were not aware and we were not notified.”

Mallozzi said that a rendering at a July 23, 2013 public hearing before the Planning and Zoning Commission shows the chillers located where they now sit (true, and you can watch that hearing here starting at 1:04:35 and the rendering in question shows up at 1:17:07).

“It was totally OK’d, the placement of it,” Mallozzi said.

Mallozzi said the narrow access road directly off of Main Street toward Spring’s lot cannot realistically accommodate two-way traffic and sightlines coming out onto Main are poor, so it’s in her interest to create an outflow via the Town Hall lot.

Spring during the summer had never said anything about creating housing in her buildings, Mallozzi said, yet “she was very much lobbying the town to build a parking garage on her property that she wanted to be partners with us on and have access to between her parking lot and the Town Hall parking lot.”

Though very early-stage discussions put the chillers on the roof of a renovated Town Hall, Mallozzi said, “When you put a skylight on the roof, you cannot have the supporting structure that would support the mechanics.”

“The skylight is the focal point of the Town Hall, so we thought, ‘OK, you cannot have a skylight and then put thousands of pounds of equipment on the roof,’ so we put them in the back of the building because we wanted to preserve all the green space.”

Here are some highlights on the timeline for this: