Though the lettering itself has been removed, the words ‘Varnum’s Pharmacy’ remain visible above the glass door at 91 Main St. 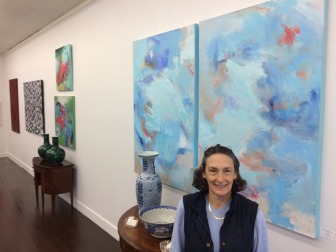 Betsy Jesup, owner of Handwright Gallery & Framing on Main Street, in the gallery’s annex (through Dec. 31) in the former Varnum’s space next door. Credit: Michael Dinan

Yet inside the space that long has served as the home of New Canaan’s last independent pharmacy (it’s been renamed ‘New Canaan Pharmacy’ and moved down the hill, to the shopping area opposite Cherry Street East on East Avenue), everything has changed.

Though it isn’t yet clear what type of business in the long term will occupy the familiar commercial space—all we know for sure is that it won’t be a food establishment—from now through the end of the year New Canaanite and downtown visitors can enjoy it as a new gallery show space. 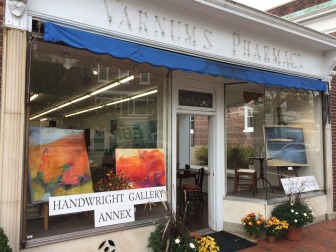 90 Main St. through the end of 2014 will serve as the home to the Handwright Gallery Annex, a show space. Credit: Michael Dinan

Bright, airy and with hardwood floors exposed (who knew) and refinished, the ‘Handwright Gallery Annex’ launched Oct. 2 and will play host to two shows between now and Dec. 31, according to Betsy Jesup, owner of Handwright Gallery & Framing at number 93 next door.

“I joined forces a week ago with Donald Rich Antiques to show that we can do contemporary art with antiques—dark brown stuff,” Jesup said with a smile Friday afternoon. 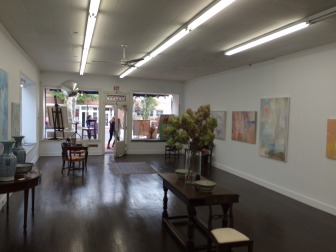 For the balance of this month, visitors will be able to enjoy contemporary art at the Annex, then Handwright’s Small Works Show will open for November and December (an Opening Night is planned for 5 to 8 p.m. on Nov. 6).

Contemporary artists whose work is up now include New Canaan, Darien and Greenwich artists, Jesup said.

Though no substantial work was done to the former Varnum’s space—really just the floors and some paint—the bright, spacious feel inside is very different. The annex is keeping the same hours as Handwright: 10 a.m. to 5:30 p.m. Monday to Saturday.