Baskin Robbins has earned an average score of 95.5 out of 100 on health inspections through the past nine years, records show.

A fixture of Main Street in New Canaan, the candy and ice cream shop has scored 92 and higher through 16 unannounced inspections conducted by sanitarians with the New Canaan Health Department since October 2008, according to a review of the organization’s files at Town Hall. 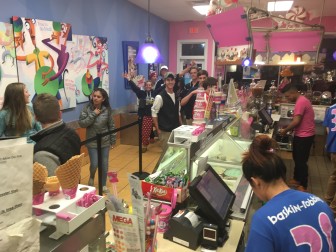 Owned by New Canaan resident and 1987 NCHS grad Anna Valente, employing a number of local teens and residents and site of the most-read NewCanaanite.com article of 2016, Baskin Robbins consistently has earned the equivalent of A’s and A+’s in its inspections (article continues below):

Speaking to such high scores generally and not to Baskin Robbins specifically, Sanitarian Carla DeLucia said it would the establishment is “without any four-point violations, without temperature violations and likely without any critical violations.”